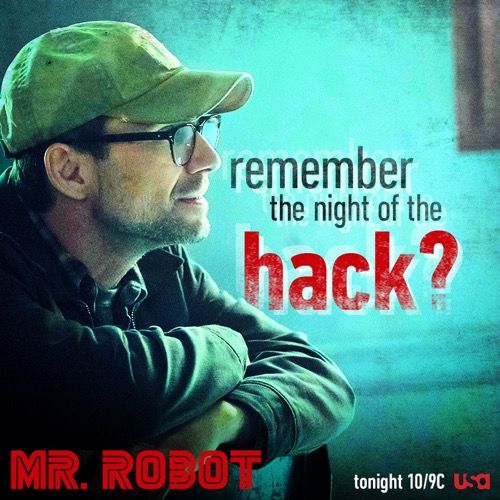 Mr. Robot returns to the USA network tonight with an all new Wednesday, August 3, season 2 episode 5 called, “eps2.3_logic-b0mb.hc,” and we’ve got your Mr. Robot recap down below! On this evening’s episode, Elliot (Rami Malek) can’t quit the game; Dom (Grace Gummer) and the FBI head to China to investigate 5/9.

On tonight’s episode per the USA synopsis “Elliot can’t quit the game; Dom and the FBI head to China to investigate 5/9; Joanna is haunted and Darlene calls on Angela for help.”

There was a reason Elliot knew that he shouldn’t go back online and unfortunately what he feared the most was what ended up happening after he touched his first keyboard in weeks. Elliot apparently loses control when goes near a computer. So that rush he gets and the way it makes him feel like he could do anything also tends to send on a power trip. Where he loses all reasoning and believes that he could take down Evil Corp and possibly hacked into the FBI without repercussions. But this favor that Elliot did for his sister had also given Darlene some power as well.

Darlene had actually called Elliot in a panic last week because she said that she needed his help to cover up fsociety’s whereabouts. So her focus should have been on what’s going on with the FBI and with Elliot out of remission. However, Darlene had gone against one of the few things that her brother has always demanded. She had gone to Angela and had tried to recruit Angela into helping them cover up their tracks because Angela had access to the FBI floor at Evil Corp. Angela unfortunately, works for Evil Corp so she had better access than anyone in fsociety to their elevators and what the FBI could be hiding yet Darlene hadn’t come right out to ask those things because at first she wanted something else. She wanted Angela to put herself in danger by delivering a “package” to the FBI floor.

Angela had of course, turned down that proposal even though all she technically had to do was drop off a device with the FBI, but she knew that the device would help Darlene hack the federal government and didn’t want take part even Darlene was going to force her. Darlene it seems had used the fact that Angela had granted fsoceity access already with a disc she had used at Allsafe as leverage. So she had said that Angela needed to help them hack the FBI to cover up the part that Angela had played in making 5/9 happened and that Elliot had covered her tracks by erasing all the logs. Yet, she was playing a risky game by getting Angela involved and Elliot hadn’t liked hearing about it after the fact.

Elliot had said that Angela was off limits and that he had done his part. He had done everything imaginable that he could do from a computer and that Darlene had to find another way to get the device into the FBI headquarters. So Elliot had definitely put his foot down with Darlene and he had ignored both her pleading as well as Mr. Robot’s. Mr. Robot had been all on board with enlisting Angela who he had written off as a means to an end. Though Elliot was able to resist his second personality and his sister because of what Angela meant to him. Angela wasn’t just some stranger, she was the woman that Elliot had envisioned a perfect future with if he hadn’t been sick.

So Angela who was supposed to be left out of everything had found herself surprisingly in danger after having talked to her ex Ollie. Ollie had apparently talked to the FBI therefore, it wasn’t coincidence that he had tried to record his conversation with Angela. Angela had after all used his computer when she had inserted the disc at Allsafe so Ollie could say that she had something to with 5/9 if he meant he could clear his own name. But Angela had thankfully caught on and she had taken additionally, measure of destroying Ollie’s phone just in case he tried to use that recording.

Yet, Angela had felt that she that she had to protect herself following that near miss. So she had gone to see Elliot at his mother’s and she had tried talking to him again if it meant he would into allow her to take part with this thing with the FBI. Angela had felt truly afraid about what Ollie had told them and what he still can tell the FBI so she thought it best to erase all signs of what she and Elliot had done. Talking to Elliot though had been something of an experience. They hadn’t talked since that day she and Darlene found him talking to Mr. Robot so going to him and finally being honest with each other had been new for them.

Elliot however, hadn’t told her about fsociety because he didn’t plan on being that truthful so he had instead talked about how things have been for him and how he was still seeing Mr. Robot. So Elliot explained that’s why he had ignored her calls and hadn’t bothered to call her back. He said that he hadn’t wanted to talk to her until he felt that he was good place again. Though Angela hadn’t cared about that. She knew that Elliot has problems and so that made her more determined than ever to protect him from what Ollie possibly do to them both. And she later put their eventual plan into action even while Elliot still had his reservations.

Angela had left Elliot’s place to go back into the city and there she had met up with Darlene. However, Darlene had still been holed up at a rich woman’s house so Angela had to come to terms with a few things before she could actually be trusted with something as valuable as the package for the FBI. Only story about the FBI. The organization and Agent Dominique DiPierro or Dom as she likes to be called, weren’t focusing their investigation on anyone from Allsafe. So Angela had been in the clear with them and the fact that hadn’t brought her in meant he couldn’t have told them much about what she did.

So Angela was taking a great risk and for that matter so was Elliot. Elliot had only taken Ray up on his offer to help because he had needed access to Ray’s computer. But after he found out that Ray was mixed up with all sorts of things ranging from kill to hire to drugs, he then tried to fall back on his old hacktivist days and plant a bug in Ray’s computer. Elliot had thought that would be the best way to catch Ray so he had ignored Mr. Robot’s warnings and was prepared to think he got away with what he did when suddenly Ray’s guys pulled him out of his mother’s place. And proceeded to beat the crap out of him.

Meanwhile, the FBI had found themselves under attack when several shooters showed up at their building and opened fire on whatever agents they could find! So that makes you wonder who was behind it all. Was it the Whiterose and the Dark Army because that seemed like a huge risk and the Whiterose generally doesn’t overplay her hand. Yet, the man behind the Whiterose persona had gotten to know Dom in a professional capacity and they had both sussed each other as a potential threat.