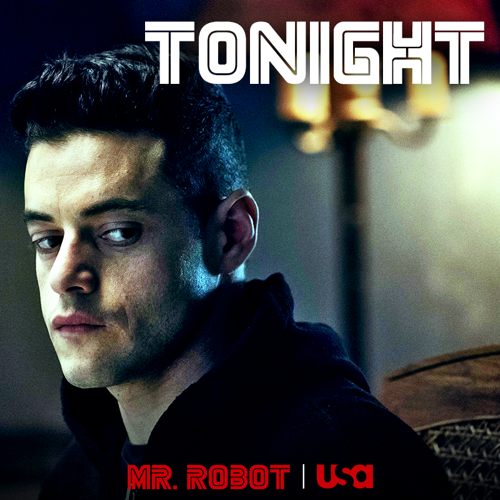 Mr. Robot returns to the USA network tonight with an all new Wednesday, July 27, season 2 episode 4 called, “eps2.2_init_1.asec,” and we’ve got your Mr. Robot recap down below! On this evening’s episode, Elliot (Rami Malek) friends Ray, who he hopes can help delete Mr. Robot;  (Christian Slater) Dom (Grace Gummer ) makes a major discovery.

On the last episode, Elliot vowed to beat Mr. Robot; Angela got a glimpse behind the curtain at E Corp; and stirred up trouble. Did you miss the last episode? We’ve got your detailed Mr. Robot recap right here.

On tonight’s episode per the USA synopsis “Elliot friends Ray, who he hopes can help delete Mr. Robot; Dom makes a major discovery; and Darlene questions whether the FBI or Dark Army is the bigger threat.”

Ever wonder where Darlene and Elliot got the idea to start fsociety much less proclaim war on Evil Corp? Unfortunately, it seems that they got the idea to do all of that from a movie they used to watch when they were younger. The movie was called “The Careful Massacre of the Bourgeoisie” and it had everything. The war on the evil rich that were running everything and even the masks that they would one do use. So the film basically crafted what they wanted fsociety to be and the idea had come to them after they had watched together on Halloween. And Elliot admittedly had an episode.

Elliot had recently been fired from a job because he had smashed several computer serves while he thought he was asleep and all the corporate guys had already left for their vacation homes. So he had been explaining to her why he had court-mandated therapy and how it supposed he had to do when she tried to get his mind off of what happened. Darlene had been messing around when she Elliot to put on their dad’s old Mr. Robot jacket. The one that his persona was always wearing now, but what Darlene hadn’t known at the time when she put the mask from the movie on him was that it was the beginning of the Mr. Robot persona because afterwards, everything was different. Afterwards, Elliot suddenly began talking about taking a job at AllSafe that they would help them take down Evil Corp.

So Darlene had seen the split in her brother’s character and simply hadn’t known what it was or that something was wrong. But she had agreed to help her brother then and she was coming to him now because she needed his help. Darlene’s revolution wasn’t working out as she planned and so she needed Elliot to rejoin fsociety although she was keeping certain things to herself and thought Elliot wouldn’t notice. It turns out she was wrong because he did notice and that had kept him from offering her his help. Elliot had listened to everything she said and he had known that she was genuinely concerned about her problem. And so the only the reason Elliot hadn’t made an effort to help her was because he knew she was keeping secrets.

Though Elliot hadn’t known how bad the secret was. Darlene it seems hadn’t told him about their former ally Romero. Romero had been killed and unfortunately what the FBI found in his belongings led to them finding the fosciety hideout on the boardwalk. So Dominique DiPierro and her team were combing through everything they found there yet it seems they were also beating themselves up for missing the pretty obvious building. The hideout literally had had fsociety written on it so the FBI were feeling pretty foolish for missing it. And were combing through everything because they wanted to find DNA.

Elliot however, didn’t know about any of that so he was still going back and forth over what to do with Darlene when Ray presented an opportunity. Ray and Elliot have been talking a lot lately so he’s noticed that there’s been something bothering Elliot. Yet, Mr. Robot didn’t want Elliot to hand over their secrets to a guy that could possibly turn them in and he pretty angry when Elliot said he wouldn’t mind going to prison for what he did. Elliot believes that if he takes the fall and say that he had been behind everything that such an act could finally stop Darlene from doing the crazy crap she does. So the only way Mr. Robot could stop him was by threatening Elliot. Mr. Robot had told Elliot that if he said anything that he was going to find the tallest building he could and throw them both off of it.

Mr. Robot had apparently thought that would stop Elliot from talking, but it hadn’t been because Elliot hadn’t been scared. Elliot had wanted to talk and had even thought confessing to everything would finally give him peace. However, Mr. Robot had offered Elliot another alternative when he saw that his threats weren’t working anymore. Mr. Robot had asked Elliot to play a game with him in which the winner will take all. Mr. Robot said if Elliot won that Elliot could confess to whatever he wanted and that if Mr. Robot then he would be in charge. So Elliot had talked this game over with Krista during one of their therapy sessions and she had warned him not to play.

Krista had told him that he shouldn’t try to annihilate Mr. Robot. She said that Mr. Robot was a part of him and that destroying one part of his entire character would essentially destroy who Elliot was as a person. So Krista had tried to tell him that for better or worse Mr. Robot was a part of him that couldn’t just erase. But Elliot thought she was wrong. He said that everyday people use photoshop and other means of artifice to change themselves so he thought annihilation was the answer and had wanted to play the game if he would get rid of Mr. Robot. A man that still wouldn’t tell him about the night Tyrell Wellick disappeared.

Though Tyrell’s disappearance wasn’t just affecting Elliot. Tyrell’s wife Joanna wasn’t quickly running out of money now that Evil Corp was refusing to hand over Tyrell’s severance pay. So Joanna didn’t know how much time she had left where she could afford everything. Her lifestyle, his men that had remained to her, and even the occasional bribe that she had to pay for just to keep a few acquaintances from running to tell their stories yet Joanna hadn’t been one to merely wait around until everything worked out. She was the kind of woman that was willing to go to Scott Knowles of all people in order to make a deal.

Joanna had gone to Scott to ask for Tyrell’s severance pay and, when she saw his reluctance, she told him that they could make a deal. Joanna said that she was prepared to go to the police and tell them that her husband hadn’t come home on the night Scott’s wife was killed and that she hadn’t seen him till next morning. So she was prepared to paint Tyrell as a murderer if she could get his severance pay. But Scott hadn’t taken her up on the offer because she had mentioned her baby. Joanna had said that she needed the money because she has a baby to take care of so Scott’s reply was something he knew would hurt her.

Scott had told Joanna that Tyrell’s baby didn’t deserve anything so that meant Joanna was up the creek when it came to that severance pay. Although, it seems Joanna wasn’t the only one that was fastly running out of options because Darlene was also in a tight spot. Darlene had heard that the FBI found a certain roster as well as Romero’s plans for one of the operations. So she didn’t know what to do next and like Joanna she unraveled. Joanna had visited her boy toy after she her little chat with Scott and Darlene had used Cisco because she needed a distraction and wanted information. Darlene wanted to know how the Dark Army was reacting to the FBI investigation and it turns out that they suspected someone in fsociety had talked.

So Darlene didn’t who was the bigger threat. A suspicious Dark Army or the FBI that did appear to be getting their hands on a lot of information in quite a short time. Yet, what she did know was that she didn’t want to tell Elliot about everything because she felt he was in a fragile state and she might have been right about. Elliot has been dreaming about what his life would be like if he had been “normal” and everything hadn’t gone so wrong. Therefore, he had been picturing a life where they were all happy and he was finally able to be happy with Angela. The same Angela he hadn’t seen in quite a while because she had seemingly dropped all of her known associations after she went to go work at Evil Corp.

However, Angela’s dismissal of everyone that she once knew seems like it’s about to change after she contacted her old lawyer friend about Evil Corp and what she suspects their planning. Angela believes that Evil Corp was planning something and that they were keeping her around because they needed her in some way. Either because she had something that she didn’t know or because they were planning on making her a fall guy for something. So Angela had told Antara Nayar that she could catch Phillip Price tripping up though all of her best efforts didn’t get Phillip to admit anything much less why he had hired her. And so she didn’t what he was playing at even if she suspected that it wasn’t going to be good for her.

Darlene though had gotten so scared of what was happening that she reached out to Elliot. Elliot had tried to play for control over his body with Mr. Robot yet he had ultimately realized that he couldn’t beat Mr. Robot because they were evenly matched so Mr. Robot had only offered up the game as a way to get Elliot to finally see that for himself. But when Darlene called him and asked him to log online because she was in trouble, Elliot could only turn to one person for an internet connection. So he had gone over to Ray’s and, even as he began to suspect that Ray’s online business was a possible cover for something else, he had to ignore his suspicions because his sister needed him. And what she said earlier about wanting the other guys (Mr. Robot) back had resonated with him.

Darlene had later said that she wanted Elliot and only Elliot however Elliot thought the best way to protect her was to hack the FBI which happens to be something that Mr. Robot would have done.