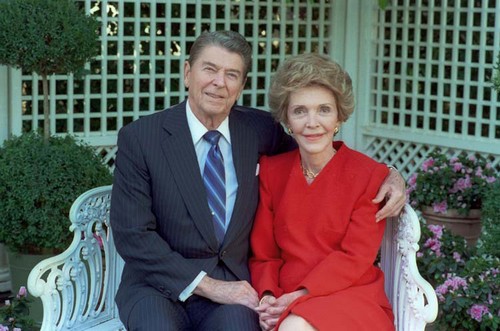 Nancy Reagan is dead at 94 years of age. Nancy died in Bel Air where she had been in failing health over the last few years. As Ronald Reagan’s second wife Nancy will be remembered for a life committed to public service.

The former First Lady during Ronald Regan’s presidency served tirelessly in her battle against drug abuse and the ubiquitous expression “Just Say No!” is attributed to Nancy. At the peak of Nancy Reagan’s anti-drug campaign there were over 12,000 Just Say No clubs functioning in America.

Despite the reluctance of the GOP to embrace all aspects of leading edge medical research at the time, Nancy Reagan was an early advocate of stem cell research in the hope that it would lead to effective treatments for victims of Alzheimer’s disease amongst other horrible ailments resistant to existing therapies. While Ronald Reagan was Governor of California Nancy became a great advocate for veterans and POWs of the Vietman War. This is a mere smattering of the great work Nancy did in her long and important life.

CBS news has some of Nancy Reagan’s history: Anne Frances “Nancy” Robbins was born on July 6, 1921 in New York City to Kenneth Robbins, a car salesman, and Edith Luckett Robbins, an actress. Her parents divorced, and Nancy was raised by her aunt in Maryland while her mother returned to the stage. Edith Robbins’ second husband, a Chicago doctor named Loyal Davis, adopted Nancy in 1938.

After receiving a degree in dramatic arts from Smith College, Nancy Davis pursued an acting career of her own. After performing on Broadway, she landed a contract with MGM in 1949, moved to Hollywood and ultimately appeared in 11 feature films. In her last movie, the 1956 film Hellcats of the Navy, Nancy appeared with her then-husband, Ronald Reagan.

We will remember Nancy Reagan as a great American who made a positive difference for millions of people. Nancy’s death is a loss to all Americans. R.I.P. Nancy Reagan.