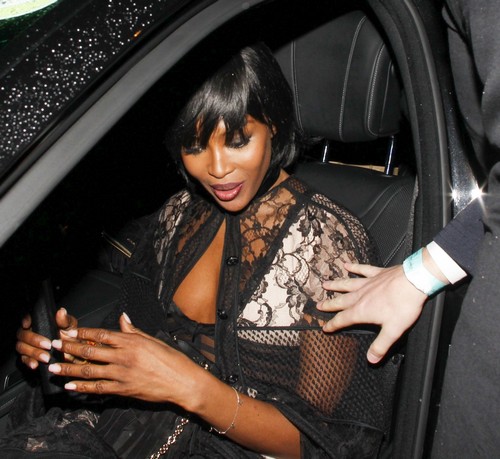 Tyra Banks left FabLife after wild speculation that she didn’t get along with the rest of the cast, namely Chrissy Teigen. Now that Naomi Campbell has been named to guest host so soon after Banks’ departure, the host switch is being pinned as a revenge on Tyra for ditching the talk show just two months in.

Is Naomi Campbell’s new role on FABLife a direct insult to the now-departed Tyra Banks? That’s what a lot of people think, including Perez Hilton, who announced plans for Campbell to join the talk show panel.

Perez reported that the entire cast and crew of FABLife are breathing easier now that Tyra is gone. Adding Campbell to the show was claimed to be a conscious move to let Banks know she won’t be missed.

Stories about Campbell feuding with Banks go back decades and apparently the supermodels can’t stand each other. Even though Naomi and Tyra have publicly battled the feud speculation for years, the stories just never would die. Now that Naomi was contacted to replace Tyra on her own show, it just further proves the rivalry between them.

Tyra Banks claims she was giving up her seat on the daytime talk show to focus all her energy on the growth of her cosmetics company. She even gave the following statement to The Hollywood Reporter: “I will be devoting more time to my new, growing cosmetics company, TYRA Beauty, which is expanding faster than anticipated, as well as overseeing my company’s other entertainment ventures.

I will, however, continue to support the growth and success of FABLife and greatly admire my fellow co-hosts and the talented production team behind the show.”

Although there was not supposed to be a replacement for Tyra, Naomi has just been cast as a guest host. This comes just after Banks completed her commitment to remain on as the executive producer through December.

It seems that as soon as the TV crew was out from under Tyra’s thumb, they immediately employed what Hilton describes as Tyra’s “arch enemy.” Campbell is reported to be taking the FABLife stage among the other hosts as early as next week.