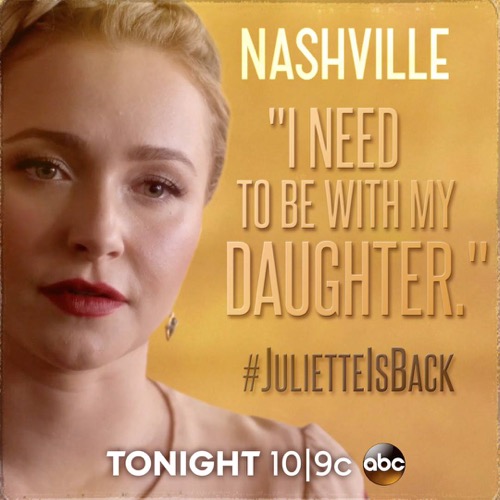 Tonight on ABC Nashville starring Hayden Panettiere continues with an all new Wednesday April 6, season 4 episode 14 called, “What I Cannot Change,” and we have your weekly recap below for you. On tonight’s episode, the Exes struggle with fame as they go on tour with Autumn Chase. (Alicia Witt)

On the last episode Luke and Riff were excitedly planning their upcoming tour, but Luke soon realized he may have moved too quickly in the decision to have Riff (played by Tony Award-winning actor, singer, musician Steve Kazee) on the road again. Meanwhile, Deacon and Frankie clashed about Vita, with Frankie making a damaging decision that could change everything. Did you watch the last episode? If you missed it, we have a full and detailed recap right here for you.

On tonight’s episode as per the ABC synopsis, “the Exes struggle with fame as they go on tour with Autumn Chase. Elsewhere, Maddie and Cash’s developing bond displeases a suspicious Deacon; Juliette seeks to reunite with Glenn; and Will and Kevin wind up working together again.”

Juliette Barnes was given the all-clear by her doctor on tonight’s episode of “Nashville”. So she that means she was finally going home. However, there was no such thing as home sweet home. She had barely gotten back when Patrick stopped by and told her about this great cameo in Spielberg’s newest movie.

And while Juliette first tried to say no, Patrick reminded her that deals like that were real life for her. Though, unfortunately, not many could say the same. Layla after all was still trying to get a known artist to accept her on tour and so far no one was biting. Not even when Rayna’s own people reached out in order to get them to change their mind about Layla.

Yet, the main problem that many had with Layla was the perception they had of her. So she was practically jumping through hoops to show that she had changed and that her mistakes or missteps can be used in her latest songs. Only she was later rattled at her own event when she was told that Rayna had convinced Autumn Chase to come hear her out.

Autumn was a big name and she was about to go on tour. But it had been Avery that stopped Layla from changing up her set list at the last just to impress one person. He said that people like Autumn had to like her for herself so he told her to about confident about what she already had. And that’s been practicing with for the last couple of weeks.

Although, Avery was at a loss for words when Juliette suddenly arrived on his doorstep. It seems neither she nor her people had informed him that she was leaving treatment. So he hadn’t been prepared to see Juliette much less hear her out.

Juliette had wanted to ask him for more visitation with their daughter and, unfortunately, he had to let her down. Avery had to tell her that he couldn’t trust her just yet. He said the baby had only been around her while she had been carefully supervised and he also mentioned that she had been barely out of treatment a day.

Therefore, he didn’t think she even had grounds to ask for more. At least not until he could see the progress for himself rather than merely hear about it. So that had put Juliette in a position. Juliette had wanted to take the Spielberg role, but she knew that if she did that she would be giving up the only six hours she has with her daughter.

And so she had to make decision on whether or not she felt comfortable enough to give up that time.

However, Juliette ultimately came up with a solution. She chose to take the role and so she asked Avery if she could see Cadence before she left. And he had agreed to it even though he hadn’t liked. Avery had actually been in the middle of helping Will write some new material and the baby had been fussy as well. So he had agreed to it because he felt guilty about keeping Cadence away from her mother if he couldn’t exactly been there for her either.

Only he had felt so bad afterwards that Will had told him to go cool off. Will has been trying to come up with all new material and his main problem with that has been focusing. Initially, Will had thought that he couldn’t write a single song by himself yet Scarlett and Gunnar had convinced him to turn to Avery seeing as they were going to be busy for the next week. Yet, Avery decided to monitor his daughter while she was Juliette and that had left Will free to mope.

Will, you see, hadn’t wanted to come up with all new songs. He had wanted the songs that Luke had put on hold. So when his night of songwriting didn’t result in anymore songs, Will had gone back to Luke and he had demanded that he get back his tracks. And Luke had surprised him. Luke said that he was going to do more than just hand over the tracks, he asked Will if he willing to come back to the label.

Apparently Luke had realized that he had been too scared for his own career when he told Will that he had to drop him for being gay yet Luke’s son had taught something about bravery. Colt had wanted to enlist and he finally got his father to hear his side of the argument. And realize that Colt was going to go anyways. Either now or the moment he became of legal age.

So when Luke had let go of his son, it made him realize that he hadn’t taken the chance on Will as the young man deserved. But while Luke came to the conclusion that it was better to let his child go, Juliette ended up having a change of heart about the Spielberg movie. And so she told a crowd full of press that she was dropping out of the film because she had only just left treatment for postpartum depression and that she needed to spend time with her daughter.

And it turns out that her coming clean helped her gain ground with Avery. Avery was still unsure about her, but he wanted to trust her so he allowed Juliette to spend more time with Cadence.

Elsewhere, though, Rayna received both good news as well as a setback. It turns out that Autumn had ended up liking some of her talent. Only she chose to go with Scarlett and Gunnar instead of Layla. And that proved to be crushing news to Layla. Layla had after all been the one to take Autumn to Scarlett and Gunnar’s set at the BlueBird.

So Layla was crushed because odd are she would have gotten the gig if she had introduced Autumn to her friends. However, Rayna said that there were plenty of other opportunities still out there for her and she chose to remain optimistic. Which has lately gotten to be harder the longer there’s been no word on Vita.

And despite his best efforts, Deacon found out that his good friend Frankie had fallen off the wagon after fifteen years of being sober. So he admitted to the part in played in making Frankie feel like he wasn’t needed around anymore and he offered to support his friend through getting sober again.