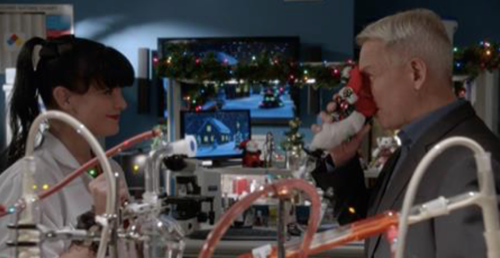 Tonight on CBS the #1 drama series NCIS with an all-new Tuesday, December 13, 2016, season 14 episode 10 Fall Finale and we have your NCIS recap below for you. On tonight’s NCIS season 14 episode 10 “The Tie That Binds,” as per the CBS synopsis, “The NCIS team tracks evidence from the murder of a Navy captain to Ducky’s deceased mother. The probe leads Ducky (Adam Campbell) to look back and question a pivotal life choice he made 37 years ago. Meanwhile, the team exchanges holiday gifts; and Gibbs eats Christmas dinner with Fornell.”

Emily Fornell was apparently getting tired of her father living on “Uncle” Gibb’s couch. She said he wasn’t doing any of his exercises and that he wasn’t fit to be seen. However, Emily had had a reason for disturbing her father and the status quo. She had recently started seeing someone named Jack and she wanted to introduce him to her father. So Emily had told her father to get his act together because she didn’t want him to embarrass her yet Fornell had heard the word boyfriend and he had flipped out. The FBI agent hadn’t known that Emily was seeing anyone and he actually thought she was too young for that.

Yet, there was nothing that Fornell could do to get his teenage daughter to change her mind about dating Jack and he wasn’t going to get any backup from Gibbs. Gibbs was very firm about wanting to stay out of whatever family drama that the Fornell were going to get into. So the call about the latest case had come in at just the right time. Navy Capt. Mason Green had been murdered and left in some dingy lot though he wasn’t robbed. His wallet had still been found on him and it had been full of cash as if robbery hadn’t been the motive at all. And so NCIS had to look into the navy captain to see why he was murdered.

So there were things that stuck out. There was the internal investigation because Green was being investigated for selling classified information and that meant he could have been killed by one of his buyers that naturally didn’t want to get caught, but the other thing that stood out was the piece of paper in Green’s wallet. Green it seems had been carrying around Ducky’s old address on a piece of paper that he kept in his wallet and that simply didn’t make sense to Ducky. Ducky had said that he never met Green and that he couldn’t see why Green would try to contact him. Though Green didn’t want to contact Ducky. He actually wanted to contact Ducky’s mother Victoria.

Victoria had been quite a character in life. She would call Ducky’s lady friends tramps and she would do so even as she had a naked boyfriend hiding in the wardrobe. But Ducky remembered that one in particular. Ducky had been worried about his mother when she had decided out of the blue to marry Balthazar who she had met on vacation and he had thought that there was something off about the fiancée. So he had asked a friend of his to check out Balthazar for him back then and as it turns out Balthazar’s name came up in Green’s later investigation. Green had seemingly tried to see Victoria for something when he had found out she had passed however he had a reason for doing so.

Green had been trying to look for Victoria because of her connection to Balthazar Kilmeany. So Balthazar was the key to the investigation and the only one that knew anything about him had been Ducky yet Ducky swore the man claiming to be Balthazar now couldn’t be the one that his mother dated. He said that would make the man at least 109 which was impossible so he thought this new Balthazar had to be an imposter. However, the man that his mother had almost married had been a con artist. Ducky’s friend back then had found out that the guy liked hanging around expensive hotels to prey on older women with large bank accounts.

So Dukcy had done what any good son would have. He had gotten “Balthazar” alone and he had told him that he knew about everything though all the same, he had offered the other man a choice. Ducky had told him that he could either be arrested by Scotland Yard or he could dump Ducky’s mother Victoria and leave England. Yet, Balthazar hadn’t hesitated when he chose to leave both Victoria and the country. He hadn’t Victoria and he had been after her money all along. And so the only thing that connected Victoria to anyone wanting to find Balthazar Kilmeany had been the ad. Victoria had taken out an ad to find Balthazar after their engagement had been called off.

Ducky on the other hand, hadn’t known about the ad. He had thought that his mother had moved past the Balthazar issue and that she had been fine without him. Though learning that his mother had gone to such lengths to seek Balthazar out had made Ducky doubt the decisions he had made back then. He wondered if he had deprived his mother of her one true love and if he had made her unhappy for the rest of her days, but there was also another part of Ducky that questioned if he had saved her from learning what or who Balthazar truly was. So he was going back and forth over his decisions when NCIS found out something.

The guys found out that Green hadn’t been a traitor. Green had found out that someone had accessed classified files using his sign-in and that the person had been selling the information. So he was investigating who that person might be possibly when he found out that the other man was using the alias Balthazar Kilmeany to funnel money through various accounts. But the name was eventually revealed to be an alias that a whole crime family used whenever they were up to another job and so the latest person to use it had been Green’s son-in-law, Logan. NCIS had found out about Logan because Victoria had revealed to her lover during her last days that she had seen Balthazar at the theatre.

However, the only person that had been going to the theater had been Logan who had been her Balthazar’s nephew and who had taken up the name when he began selling classified information. So Ducky had been right all along. That man from his mother’s past hadn’t been right for her and she had ended up being happy with someone else. Even if he hadn’t realized it at the time. So Ducky had been given one of the best Christmas presents he could ever ask for and later he got to celebrate the holiday a little earlier than planned with his friends. And one of them had been a very happy Gibbs.

Gibbs had finally gotten Fornell off his couch like Emily wanted, but he had later found out that he had termites and so now he was sleeping on Fornell’s couch.