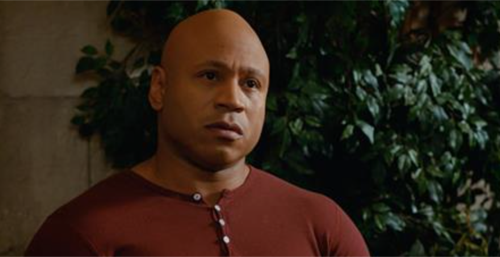 On the last episode, the NCIS LA team investigated an abduction case while down two members, with Hetty being held in D.C. for questioning.  Did you watch the episode?  If you missed it we have a full and detailed recap, right here!

On tonight’s episode as per the CBS synopsis, “After a Homeland Security agent is poisoned by a notorious Triad assassin, NCIS uncovers a warehouse of counterfeit purses and a money trail to stolen government funds. Also, Nell joins the team in the field.”

Callen did something stupid on tonight’s episode of “NCIS: Los Angeles”. He had apparently decided to do an Ironman triathlon without any kind of preparation whatsoever. So he was sore and barely in working condition the next day when he actually had to go to work. But fortunately for Callen, he and Sam weren’t the only ones running point on their latest case. Homeland Security Agent Jessie Evans and a friend had been lured to a party where Jessie was later murdered. And there seemed to be a pattern about Jessie’s murder because he wasn’t even the first dead agent to that NCIS knew about.

A second agent had also been killed recently and in NCIS’s backyard. Though it was important to note that both the first and second victim had been working in one specific unit. They had both been in the Customs field and strangely it seems they had spent most of their time working on counterfeit goods. So everyone and especially DHS had wanted to know if all of their agents were in danger or if Jessie along with the second agent had been working on something important. The last option, however, had been considered a bit of stretch until the NCIS started to investigate the case and Deeks finally came into work

Deeks was spending most of his spare time and part of the early workday day by Kensi’s side because he had sadly thought that she would wake up if he was around. However, Kensi’s condition hadn’t markedly changed since the doctors first informed her loved ones that she was in a coma. So eventually Deeks was going to have to remember his other priories and for now, his friends have mostly been covering for him. Granger, after all, was a stickler for the rules and, with Hetty doing some mole hunting, he was still the one in charge. And yet he hadn’t said anything when it began getting noticeable that Deeks has been late to work a lot.

So he along with everyone else must be giving Deeks some room to breathe and Granger had only intruded on Deeks’s time with Kensi because he needed more hands on the case. Some footage taken at the time of Jessie’s death had showed that he had been killed by a triad assassin. The assassin’s name was Ming Wah and generally, she would have been working right alongside Zhang Kiu. Yet, it had been confirmed that Zhang had been taken out by his enemies several years ago and therefore no one knew who was footing Ming’s bill now. And all NCIS had was the fact that someone must have hired her.

But Who? Nell had been teamed up with Deeks so it had only been Eric back at headquarters to do some cyber sleuthing and he ended up finding a warehouse where Ming was last seen. So four agents had been dispatched to bring in Ming Wah who was considered to be highly dangerous yet neither of them had thought that someone as skilled as Ming would dirty her hands with counterfeit handbags. That’s what the warehouse had been full off and, well, it just didn’t add up. The counterfeiters, of course, had taken time and care by recreating prestigious designers and so the bags were passable. And so the real question was why hire Ming Wah to help hide bags.

Sam though had said that counterfeit was more harmless than it looked. He explained that the counterfeit handbags could fund child labor, human trafficking, as well as terrorism. So really someone was using the handbags as a means to end and two DHS agents had to die in order to cover up that very real motive. Yet, the guys had waited in the warehouse until someone came and luckily for them Ming Wah had brought along a friend. Ming and very much alive Zhang Kiu had entered the warehouse to check on their goods when NCIS announced themselves and the duo split up.

Ming went one way and Zhang went the other. However, Zhang was caught while Ming managed to escape and that worked out just fine for NCIS. Zhang was the big fish and he would probably know more about their dead agents than anyone else. So Sam and Callen had questioned how Zhang found out his warehouse was being investigated and funnily enough he had an inside guy though in this case, it would be a woman. Zhang hadn’t been prepared to give her up and so NCIS had to follow the evidence. Like a dead Ming who had been killed by their inside woman because she was going to betray them all.

DHS Agent Donna Merritt had been set up a pretty large bank account in exchange for betraying her country as well as her fellow agents. So it wasn’t that surprising that she would get greedy and believe she could set up her own counterfeiting business. Donna had bought up a warehouse filled with her own products and unfortunately her it was all traceable. And so it didn’t’ matter that Donna had betrayed her own government, what mattered to NCIS was getting to her before Zhang’s men could kill her. Though Nell wasn’t really happy about risking her life to protect a traitor.

She had thought it was kind of pointless and so Sam had to reassure her that where Donna was going wasn’t exactly pleasant. So, despite the dangers they put themselves in, the guys were able to round up Zhang’s hired guns and they also caught Donna. But while Donna was going to help out Zhang, that wasn’t the end of tonight’s episode.

No, the end was when Hetty went to see Kensi and Kensi was actually able to grasp Hetty’s hand.