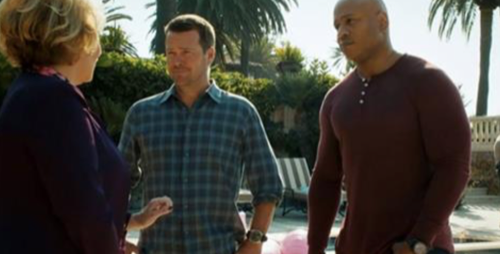 On the last episode, after a Homeland Security agent was poisoned by a notorious Triad assassin, NCIS uncovered a warehouse of counterfeit purses and a money trail to stolen government funds.  Did you watch the episode?  If you missed it we have a full and detailed recap, right here!

On tonight’s episode as per the CBS synopsis, “The murder of a navy machinist with high security clearance sends the team on a city-wide hunt tracking evidence. Also, Anna Kolcheck (Bar Paly) partners with Callen, and Sam assists Hetty in the on-going mole investigation.”

Kensi’s condition wasn’t improving by much on tonight’s episode of “NCIS: Los Angeles”, but she was in fact making greater strides than any of her doctors would have believed serval weeks ago and that gave those who loved her some much needed hope.

Kensi was now moving her leg and Deek’s mother even swore that she heard Kensi talk. So Deeks had eventually been called and his mother asked him to come down to the hospital. Roberta had said that he needed to be there in case Kensi woke up and she didn’t quite understand why he was dragging his feet about coming back. Yet, there had been reason for why Deeks wasn’t sure about Kensi waking up.

Deeks had later admitted to Hetty that a part of him was scared of Kensi waking up. He said that there was a possibility that she was going to need a lot of help and he didn’t think that he could be the type of guy that was there for her. So Deeks hadn’t been sure about what to do next.

If he should go to Kensi and be by her bedside or should he stay on at the office and work their latest case with the rest of the team. But Deeks’s friends and coworkers had all stepped up to cover for him at work so that allowed Deeks to return to the hospital while the others investigated the murder of Brandon Noah. Noah had been a Navy Machinist and unfortunately he had gotten into a struggle with the assailant when he lost the fight and was shot at point blank range by his killer.

However, who was his killer. Noah had been on the rooftop of an old building that didn’t have cameras and there was also no logicial reason why Noah would even be on that rooftop in the first place yet Noah had gone there and two people on the next over had witnessed his murder.

So Sam and Callen went to the crime scene in order to find out what they could while Granger and Nell went to question Noah’s roommate. Noah’s roommate was Reggie Tiller and Reggie said that Noah had gotten into this loud argument not that long ago with Neil Lott.

Only Reggie didn’t understand why the two men had been arguing. His roommate had been military and Neil had been a military contractor so that led everyone into wondering later if it had been work that got Noah killed.

Noah and his team had been taking part in a technically classified drone project that only people with the highest clearance had known about. So that didn’t really make a lot of sense that someone who wouldn’t be part of Noah’s team to know about his project however NCIS couldn’t overlook anything. At least not when they had a mole of their own still running around.

Therefore, Hetty brought on some additionally help on both cases that she was working on. Brandon Noah’s death and the Mole investigation. So Hetty had wanted Sam to question the man that claimed to be the mole and she had teamed up Callen with Anna Kolcheck in the meantime.

Things were still kind of awkward between Anna and Callen, but together they did great work. The two had talked to Neil Lott and Neil had said that everything had been good with Noah. Though it hadn’t always been that way which was what the scene in front of Noah’s house had been about.

Noah had apparently borrowed some money from Neil back when he was having some mole problems and so Neil had blown up at his friend when he began to believe that Noah was never going to pay him back. So that had pushed Noah into starting payments back to Neil and he had been paying Neil a good five hundred dollars on a weekly basis.

Yet, Noah didn’t really have that type of money. Noah had a government job that didn’t much so the fact that he was able to repay what he owed meant he either had a second job or had been up to something illegal. So Callen and Anna were checking out that lead when Nell and Granger found one of their own.

Nell and Granger had found an old bike part at the crime scene and they had to gone to a seller that they knew had sold of them though the guy that ran the place was really only good for his surveillance cameras. The cameras had picked up on the struggle between Noah and his killer and so Nell gave the image of the killer’s face to Eric to clean up.

Eric had magnified the image and had removed most of the blurriness. So that showed the killer’s face perfectly and that had helped Callen later on. Callen and Anna stumbled across an auto body shop that seemed shady and they had a good reason to doubt it was on the up and up.

The shop was where Noah went to work in order to repay his friend and it turns out that the shop had been a front for an illegal gun smuggling ring. But Callen and Anna had thought that they could handle things themselves so they went to the shop and Anna was supposed to be rummaging through files while Callen did a walk around the entire building. And that’s when it happened.

That’s when Callen saw their killer at the shop and also witnessed up close the illegal manufacturing of AR-15 guns. However, Callen couldn’t finish observing as much as he needed to because Anna had gotten caught by some of Noah’s former coworkers.

So reinforcements had to be called in and Callen also had to risk his neck to save Anna’s life yet Anna had later been proud of herself because she hadn’t shot people as much as she used and that had been a bit of improvement on her part. And so NCIS rounded up everyone involved in Noah’s murder, including the actual shooter, and they solved Noah’s murder.

Noah had been murdered because he realized what was going on at the shop and had tried to turn them all in. Though while Noah was murdered for that, he still helped put an end to what those people were doing and stopped such weapons getting into the wrong hands. So Noah was a hero and, despite not being there personally, Deeks had still been proud of his friends did, but it was a good thing that Deeks had stayed behind with Kensi. Kensi had later woken up on tonight’s episode.

But Sam had unfortunately gotten nowhere far into finding the mole.