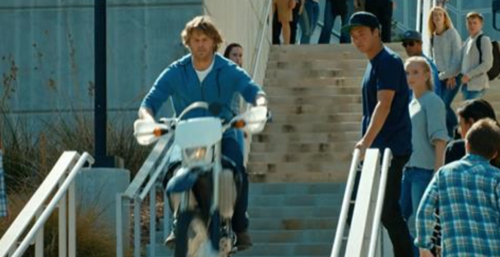 On the last episode, Callen (LL COOL J) went undercover as a patient in a mental health hospital to search for an NSA agent who disappeared while tracking an ISIS cell trying to cross the Mexican border.  Did you watch the episode?  If you missed it we have a full and detailed recap, right here!

On tonight’s episode as per the CBS synopsis, “After a graduate student developing an electromagnetic weapon for the Navy is attacked, the NCIS team discovers a connection to international warfare. Also, Kensi continues grueling physical therapy for her spinal injury.”

A graduate student at Whitley Tech had suffered serious and almost fatal injuries during a trivia game when the buzzer unfortunately, electrocuted however there was nothing accidental about what happened. The student’s name was Yuri Volonev and he had been working on a military project with his professor that would give the Navy a new electromagnetic weapon. So there were plenty of people as well as nations out there that would want access to what Yuri was doing and would be perfectly happy with killing him if he wasn’t willing to help. But the list was simply so large that NCIS had needed all hands on deck.

However, they got lucky. Deeks has been feeling better recently and he wasn’t letting Kensi push him away so they didn’t have a problem anymore with showing up on time for work. So Deeks had actually already been in the building when they got Yuri’s case and he had gone to the university while Sam and Callen went to check out the tiki bar. The tiki bar that was called Pacific Seas was were the trivia game was played and it was their best bet of finding out who had tampered with Yuri’s buzzer though the guy that runs the game swears he didn’t leave the equipment alone and the only thing odd had been the pre-teen that had been hiding out in the security room.

The pre-teen was Nadia and the guys found her because her asthma had started acting up. Though Nadia wasn’t a threat. She had instead had been Yuri’s daughter and her mother had whole-heartedly thanked the gods for bringing her back to the hospital. Pamela Volonev had apparently thought Nadia was doing her homework in the cafeteria and she hadn’t known that she had left until NCIS had informed her otherwise. So it was good thing that nothing happened to Nadia yet NCIS did do their best to ensure her that they were looking for who hurt her dad and she so she gave them as she could.

Nadia was homeschooled because she was a genius like her dad and so she did know a little something about her dad’s project, but she was also on the shy side and that’s why she gave a message to her mother to pass on to Sam and Callen. So it was Pamela that told them nothing that Yuri was working on would work without the second part of the project from Professor Chapman at Braddock University. Yet, NCIS didn’t know if they could trust Professor Chapman or his partner so they sent Nell in. Nell had later approached the professor as a student from Brown and she was supposed to act a mere gawker when suddenly that turned into something else.

Someone had sent a drone to attack the professor and his assistant and Nell would have also have gotten hurt if Eric had rescued her by blowing up the drone. But the clear assassination attempt on all of them including the student they thought was an intern had proved that Chapman had nothing to do with what happened to Yuri yet it did show that someone wanted to finish the project on their own. It would be one thing to harm Yuri and quite another to try and wipe out everyone that had been directly involved. So NCIS went back to Yuri’s home to check his belonging and his daughter ended up giving them her father’s flashdrive when they couldn’t find anything on their own.

Yuri had apparently left an encrypted video to his daughter on that flashdrive and Eric had managed to get the data he wanted by running a few tests. So they had found her father’s work though they didn’t have access on Chapman’s end because his computer had been hacked before it was fried. Nell had looked at everything she could and all she found were suspects. The young men and women in the engineering program hadn’t known that she was a federal agent so she continued to act as a potential intern. Yet, she did find out about a young Pakistani woman that was at the school on a scholarship and who did have the knowledge to hack the professor’s computer.

Though Nell and even Deeks had written that woman off because they thought she wouldn’t risk scholarship and technically they had been right. She didn’t want to risk her scholarship however she felt didn’t need one anymore seeing as someone in the Whitley’s Admissions office had paid her a quarter of a million. So Deeks and Nell didn’t know they were wrong until after Nadia had been kidnapped. The people that wanted the information had correctly guessed that Nadia’s father Yuri might leave something in her cloud account and they had needed her in person because she had used her irises as additional security. Hence the kidnapping.

Nadia had been outside with her mom and they had been getting ice-cream when out of nowhere a car pulled up and took off with her before Pamela could get help. However, Nadia did want to cooperate with her kidnappers and they had been forced to call Pamela in order for Pamela to tell her daughter to do whatever they said. So Nadia did help them out and at the same time she sent off a picture that she knew would give Sam and Callen her whereabouts. And so the guys quickly found her and they even traced the one kidnapper that got away by the message he had sent to Braddock, but everything did come together once they knew who they were dealing with.

The guy from admission was Scott Young formerly Scott Yung whose father worked in Chinese Intelligence. So Scott had stolen key intel because he had wanted to get his father to forgive him for not getting into a top college. But Scott never got the chance to send everything to his dad because Sam and Callen later caught up to him at a strip club of all places.

So Nadia was safe and there’s chance her father could get better.