BY Kristine Francis on November 6, 2016 | Comments: one comment
Related : Uncategorized 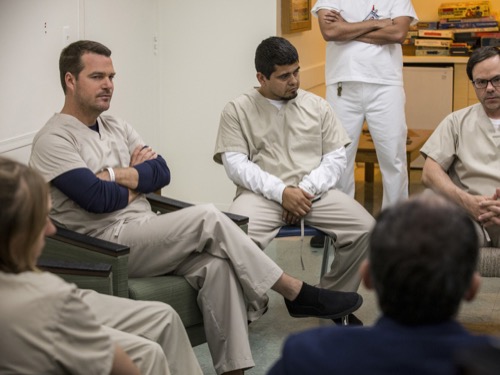 Tonight on CBS NCIS: Los Angeles returns with an all new Sunday, November 6, 2016, season 8 episode 7 called, “Crazy Train” and we have your weekly NCIS: Los Angeles recap below. On tonight’s NCIS Los Angeles episode, a NSA agent disappeared while tracking an ISIS cell trying to cross the Mexican border.

On the last episode, after a maintenance man saved the life of a lieutenant commander, the NCIS team uncovered his dark past which put a local teenager in danger.  Did you watch the episode?  If you missed it we have a full and detailed recap, right here!

On tonight’s episode as per the CBS synopsis, “Callen (LL COOL J) goes undercover as a patient in a mental health hospital to search for an NSA agent who disappeared while tracking an ISIS cell trying to cross the Mexican border.”

Kensi was doing better and her doctors had said that she was slowing improving however it was still hold for her to be in the hospital and Deeks almost constant presence wasn’t helping. Deeks would sleep at the hospital and also visit Kensi during the day. So he was always around because he wanted to be there if she needed him when all it was doing was irritating Kensi and making Deeks disorientated at work. But, as they’ve done since the beginning when Kensi was in her comma, everyone was trying to be supportive and they were also trying to get Deeks to laugh again.

Deeks hadn’t exactly gone back to his old self after Kensi woke up so Sam and Callen tried to get Deeks’ mind onto other things. Like the question game that Sam’s daughter taught him and that he was teaching Callen. So Callen asked Deeks which would he rather – be invisible or fly – and the Deeks that normally would have joked about that had gone blank. He didn’t know what to say and that was mostly because he didn’t care about a silly game that wasn’t going to help Kensi. Yet, Kensi was her own problem.

Kensi hated the fact that her recovery was taking too long and that had made her lose it with more than just Deeks. She had also snapped at her doctors and tried to throw a pity party in front of her physical therapist. However, while Kensi was treating her condition as a weakness, there was Granger calm as a cucumber about his own health problems. Granger has had to undergo an MRI recently and he didn’t make that or its results stop him from taking charge back headquarters. And so it was Granger that dealt with NCIS’s latest case.

Granger and therefore NCIS had been notified that NSA Analyst had washed up dead in LA. Though what had been strange was the fact that the analyst had apparently been dumped in a bag and washed up in the stomach of a shark. So there were plenty of questions to go around. Who killed Tad Larsen and where did his partner go? Tad’s partner Bruce Carter had apparently been ordered to report around the same time as Tad so many thought Bruce was also dead, but that story didn’t pan out and neither did Bruce for that matter.

Nell and Eric ran a facial recognition yet they ended up finding Bruce alive. Bruce as it turns out walking the streets as if everything was fine and so that begged the question why didn’t check in with his bosses. So Sam and Callen had been sent to question Bruce and they did find Bruce. But when they found him, Bruce had been with another analyst and they had claimed that their lives were in danger. Bruce and the woman that later introduced herself as Jolene had explained that they had been investigating a lead to ISIS when both Tad and a fourth analyst disappeared.

Bruce had said that he, Tad, Jolene, and Gary Dill had been investigating ways ISIS was funneling money and that lead from Syria to Mexico to LA. Yet, Tad went missing and neither of the other two could find Gary. So Bruce and Jolene had said that they were scared of being next and that they wanted to get back to Washington before anything else could happen however Gary had been found alive and neither Bruce nor Jolene had been heading back to Washington. And so Callen had been sent to investigate Gary while Sam had found himself stuck with Bruce and Jolene.

Gary though had checked himself into a psychiatric facility so Callen had to pretend to be “ill” in order to see him and he saw for himself that Gary wasn’t crazy. Gary was simply pretending to be crazy because he was hiding from a corrupt analyst. Like his partner Jolene who was supposed to investigate cartel activity and not take bribes from them. However, Jolene did more than just take bribes. She also stole from them and had then tried to pin it on Gary who wisely ran for his life after he noticed someone had hacked him.

Tad and his death on the other hand, had simply gotten involved after Bruce got involved. Bruce and Jolene were both cheating on their spouses with each other so they stole from the cartel as a way to start over somewhere else. Though thankfully Sam found them before they could reach the airport and he eventually got the whole story from them. So Sam had tried to race to the facility to save Gary and Callen, but he had been too late. The cartel had gotten there first and Callen played the hero by making the hired guns believe he was Gary.

So there had been a moment there when it looked like Callen would be fed to the sharks only his partner found him in time and together they had arrested the leader of the Banuelos Cartel. But all still wasn’t well tonight. Kensi was constantly her own worst enemy and so she did something stupid. She had tried to walk again with no one else around and she had fell flat on her face with a bleeding wound on her leg to show for it. And so Deeks continued to be supportive. He tried joking by what happened like what Kensi did wasn’t so bad and he even showed off the ring he had gotten her however Kensi told him no.

Kensi didn’t want to be in a wheelchair during a proposal so she turned down Deeks which left them both unhappy.

And whatever it is that’s ailing Granger hasn’t been defined just yet.