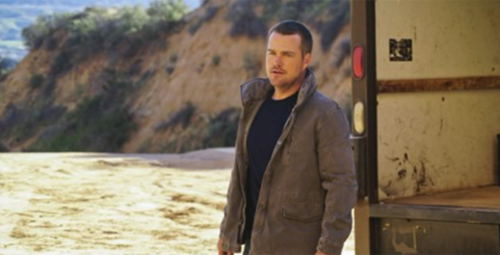 Tonight on CBS NCIS: Los Angeles returns with an all new Monday April 11, season 7 episode 21 called, “Head of a Snake” and we have your weekly recap below. On tonight’s episode, the team learns that operational psychologist Nate Getz (Peter Cambor) is working with an infamous crime leader.

On the last episode, while assigned to protective details for the commander of the Pacific Command, the team searched for a North Korean spy. Did you watch the last episode? If you missed it, we have a full and detailed recap right here for you.

On tonight’s episode as per the CBS synopsis, “the team learns that operational psychologist Nate Getz is working with an infamous crime leader, after he fails to check in with Hetty while working undercover on a mission linking organized crime to terrorism.”

Tonight’s episode looks like it is going to be great and you won’t want to miss it, so be sure to tune in for our live coverage of CBS’s NCIS: Los Angeles at 10:00 PM EST! While you wait for our recap hit the comments and let us know how excited you are for the season 7 episode 21.

A seemingly straightforward carjacking was revealed to be so much more on tonight’s episode of “NCIS: Los Angeles”. Apparently the team’s old friend Nate Getz had been sent in undercover to infiltrate organized crime that has been linked to terrorism in LA. And as it happens Nate had been revealed as taking part in that particular carjacking, but what the team had to figure out was whether or not Nate was still one of them or had he been turned?

Nate had been a friend and the department had once trusted him. However, Nate hadn’t made contact in over twelve weeks and so the first sign his people had of him still being alive had been the carjacking. Which in this case wasn’t just any carjacking because the innocent produce truck they had robbed had in fact been a cover for the transfer of outdated AK-47s that went perfect with the armor piercing ammunition that just so happened to be included. So the guys back at headquarters had realized that the ammo might have been the true target yet they didn’t know for what?

Or why Nate had even helped the people he was investigating? Nate it seems had led the group he had infiltrated into finding that decoy truck and so there were a few that believed Nate had truly double-crossed the U.S. Government. Though the guys had still wanted to believe so they had gone to the location Nate had last been seen and they had actually tried to help him when they found him unconscious. And unfortunately that had simply been another ploy.

Nate hadn’t been injured or left for dead, instead he had set up a trap for Sam and Callen. The two men that he knew would ride out to his rescue if they could. So the second the guys had their backs to him in order to focus on his approaching friends, he pulled out a weapon of his own and even convinced his new boss to take Callen prisoner. Although he had again interfered when Alisa Chambers tried to kill Sam.

For some reason, he didn’t think the latter part was necessary so he left Sam behind at the scene while he and the others drove away with Callen. Callen though had been taken for a purpose. He was apparently one of the few people that knew where the JD-X (highly sensitive explosives that could wipe out up to three blocks) was seeing as he had once been in charge of the JD-X security protocol. And therefore Callen knew why Nate had helped their enemies get their hands on the AK-47s.

It had been a test. The people that Nate was suddenly siding with had wanted to test him to see if he really was one of them and so he handed over the coordinates to the weapons. That in a grand scheme of things hadn’t actually mattered. What did matter was the JD-X that and how Callen knew better than anyone else what they had to do in order to bypass those very same protocols he helped set up.

But Callen wasn’t one to crack under the pressure much less interrogation. So he was able to withstand a little waterboarding and Nate’s constant input. That had really been more about how they both had a reason to mistrust Hetty because she never tells them the truth. And yet it still hadn’t been clear by that point, at least to Callen that is, if Nate had turned.

Nate though had helped Alisa in finding the truck and getting to Callen, but then he saved Sam’s life and admittedly took it easy on Callen. Nate did after all know a lot more about Callen than he let on to his boss so Callen had been left unsure. He couldn’t tell what was a turned agent or what was method acting at its finest. However, Nate had helped Alisa get her hands on the JD-X and he had again saved someone’s life.

That time it had been Callen’s. Alisa, who was known around the world as a black widow thief whose partners either end up dead or missing, had wanted to kill Callen once they no longer had a purpose for him. Yet, Nate had talked her into letting him live albeit for a little while longer. He said that they had to dispose of Callen in pieces and that such a thing would take time that they don’t have.

So that’s how Nate had saved Callen’s life and thankfully Callen’s people were given enough time to later rescue him. Although Nate had seemingly helped with that as well. Sam had it seems gone by Nate’s place to see if Nate really did give up on his past life and what he found was a hidden compartment inside of an air vent. And it revealed several photos that Nate had taken of the getaway car that they were still using.

And so Nell had traced the car which she found in Mid-City, but Sam had made the connection between the area and the JD-X.

Though an eventually cross-check between Alisa and all known terrorist groups in the area did show why a diamond smuggler had changed her MO. It appears that she’s been working with Omni and so the guys had to catch her in the act of selling the explosives yet they had followed the car in hopes of making a move that could lead them to rescuing Callen. Only Callen had ended up making the first move.

Callen had thrown himself out of the getaway car so his friends had stopped to see if he was ok and unfortunately they lost the car. But Nate did reveal his true colors in the end because he had found the bug that Callen placed on him and he had chosen not to get rid of it. So thanks to Nate who let the tracker continue tracking him and Alisa – NCIS and a fully armed SWAT team descended on Alisa the second she tried to sell the explosives to Omni.

Yet, afterwards, Nate had to make a round of apologies. He had done what he had set out to do however he had nearly convinced his friends that he shouldn’t be trusted so he had to apologize. And later he told Hetty that maybe he wasn’t set out for the undercover thing, but she told him that him that now was only the beginning of what they were about to do.