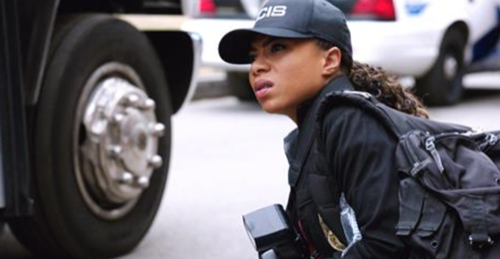 Tonight on CBS NCIS: New Orleans returns with an all new Tuesday March 15, season 2 episode 18 called, “If It Bleeds, It Leads,” and we have your weekly recap below. On tonight’s episode, Brody  (Zoe McLellan) believes that a sailor hit by a party bus in the French Quarter is connected to her sister’s death, after the NCIS team discovers similarities between the two.

On the last episode the team had to protect a local DJ from a threatening perpetrator as they investigated the murder of a Navy captain who was attacked while on-air with his radio show. Meanwhile, Pride’s daughter returned home to discuss her plans for the future. Did you watch the last episode? If you missed it, we have a full and detailed recap right here for you.

On tonight’s episode as per the CBS synopsis, “Brody believes that a sailor hit by a party bus in the French Quarter is connected to her sister’s death, after the NCIS team discovers similarities between the two. Meanwhile, the team prepares for St. Patrick’s Day festivities in the Big Easy.”

Tonight’s episode looks like it is going to be great and you won’t want to miss it, so be sure to tune in for our live coverage of CBS’s NCIS: New Orleans at 9:00 PM EST! While you wait for our recap hit the comments and let us know how excited you are about the season 2 episode 18. What is your favorite part of season 18 and how do you think the season will unfold?

A bachelorette party had rented a bus for the night and they had been drunkenly enjoying themselves when the bride took a nasty fall. That led to the driver of the bus turning back to see what was wrong and accidentally running over a man once he had finished making sure his passengers were ok. Yet the victim’s name had been Chief Warrant Officer Evan Babish and Babish who had been highly trained should have seen the bus coming.

So on tonight’s new episode of “NCIS: New Orleans”, Pride had his people look into the reason behind a SEAL missing a bus and the answer turned out to be surprising. Babish it was revealed was supposed to have reported in for duty on the day before his accident. And yet he hadn’t showed up which his CO had said was unlike him despite Babish’s past history.

Babish had reportedly been working at the Houston Globe for the last three years after he had needed a break from the Navy because he was “burned-out”. Therefore, there had been a few on the team that had thought that maybe he still needed a break and that’s why his blood alcohol level had been so high on the night he died. And that his death could very well have been an accident, but Brody and Sebastian had gotten a different idea.

Those two had apparently spotted the similarities between Babish and Brody’s sister Emily. Both Babish and Emily had worked at the same paper at the time of their deaths and they had both been killed by vehicles. Babish having been run over by a party bus and Emily having been hit by a drunk driver. That wouldn’t have known if Emily had walked into the street or had been pushed.

Only Babish’s wounds proved that he had been fighting with someone before his death and that person’s DNA had been found in the scratches on his arm as well as underneath his nails. So there was a chance that he had been pushed and, if that was the case, Brody and Sebastian had to wonder if Emily had also been murdered. What with everything else matching up.

Though Brody hadn’t gotten the same kind of support when she had taken her idea to Pride and the guys. At first they had listened to everything she said and they had questioned if she was simply looking for answers in Emily’s case because she needed them, but what really made everyone else skeptical was the fact Brody had gone to Sebastian. Sebastian being the biggest conspiracy theorist that they know.

However, Pride did want his people to investigate their lead into Babish’s case. Babish having recently uncovered major corruption in a company called Forefront. With their CEO Zorn being the one to commit most of the offences.

Zorn had been arrested because of Babish’s article and he was awaiting his trial out on bail. Yet, it was Zorn’s security cameras outside of his house that had caught the last images of Babish alive. Babish it seems had broken into Zorn’s house to steal the other man’s laptop though that hadn’t made sense because his article had already come out by then.

So NCIS theorized that maybe there was something else on the laptop and Plame had tracked it down using its internet connect when it appeared that someone else was trying to hack it remotely. Which again hadn’t made sense because it was long before NOPD had reported Zorn’s death. Zorn having been hit by vehicle after he supposedly wondered out into the street.

And therefore two people that had a connection to the laptop were dead. Although it couldn’t have been coincidence that two people were killed the same way and that the hacker later turned out to be Edward Lamb. Edward Lamb being the man that was convicted for killing Brody’s sister and who had only been released from prison six months ago, Lamb said he hasn’t touched a drop in months.

It seems he believed that he had been drugged that night and that someone else had driven his car into Emily on the night she died. Hence when he found out that someone from her paper had died in the same fashion – he made the connection between the two cases just like Brody did. And like Brody went on to do, Lamb investigated the case in hope of finding the killer involved in both of those crimes.

Which is why he hacked Zorn’s laptop. Only Zorn wasn’t the killer they were looking for. So Loretta ultimately decided to do a side by side comparison of Zorn and Babish tox screens and she found that they both had the same drug in their system. They had Alprazolam. Alprazolam being a drug that reacts negatively with any amount of alcohol. And that has been known to make people appear as if they were more inebriated than they were.

So Lamb had been innocent and the laptop proved to be a goldmine. Plame began working on it the second LaSalle found it and he noticed that someone at Houston Globe had put a bug on the computer. And that they were using that bug to secretly spy on Zorn.

Though Babish’s girlfriend admitted that the spying had gone much farther than Zorn. She told Pride and Brody that her paper has been spying on people for years as a way to get information once the usually channels dies and that Emily like Babish had realized someone was bugging companies they were looking into in order to get the story. And that person that was supposedly helping out the reporters was the owner of the paper.

He later admitted that he had been hard on his company to keep up with the blogs, but his exclusives kept the people coming back. So that’s why a few people had to die and unfortunately Emily had been the owner’s son’s fiancée. And Daniel Nolan hadn’t believed his father could be that ruthless until he figured just what the old man had been willing to do to him.

And so Brody did get her closure, but it had come at a price.