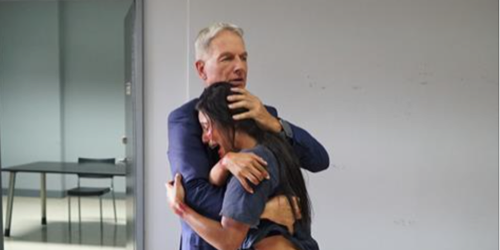 Did you watch the last episode of NCIS where a missing MI6 Officer was linked to a murdered petty officer, Gibbs (Mark Harmon) sent Quinn and Bishop to Philadelphia to work with MI6 Officer Clayton Reeves (Duane Henry)? If you missed it we have a full and detailed NCIS recap, right here!

On tonight’s NCIS episode as per the CBS synopsis, “After a kidnapped petty officer escapes her captor, NCIS uncovers a connection to her missing husband. Also, Abby (Pauley Perrette) knits the NCIS newbies personalized gifts.”

[2016-10-25, 8:33:26 PM] Kristine Francis: Petty Officer Kelly Ristow had been held prisoner for days without end and had been subjected to the worst kind of torture when she managed to do the impossible. Kelly managed to escape. She had waited until her kidnapper had let down his guard and she had killed him before he could put of much of a fight so that allowed to her to runaway however Kelly strangely didn’t seek out a police station or even a nearby military base afterwards. So NCIS ended up finding Kelly at the airport. She had been planning on boarding a flight and unfortunately that looked as if she was running just shortly after she killed someone.

So it looked bad. Kelly had injuries and she was psychologically traumatized, but she had gone to the airport for some reason and no one knew why. Kelly hadn’t actually bought a ticket for any flights and her husband had still been in town. However, NCIS believed that Kelly had been prisoner so they had wanted to protect her and sadly that also meant that they had to tell Kelly about her husband. Kelly’s husband’s Chris hadn’t filed a report that she had been missing nor did he make any strides to find her once she was gone and so that didn’t make sense to Kelly. She had said that she borrowed someone’s phone after she had escaped and that she had talked to Chris.

Chris had told her to meet him at the airport and he had said that they had to get out of the country. So that’s why Kelly had gone there yet Chris hadn’t showed up at their designated spot and that she had truly frightened Kelly. She had told NCIS that she truly believed that her husband was in danger because he didn’t show and so they had agreed to look for him. But nor for the reasons that Kelly thought. NCIS had wanted to look for Chris because they thought that he had something to do with his wife’s kidnapping. Chris hadn’t showed any concern for Kelly after she had been taken and evidence at the house proved that Chris had been home fairly recently.

The house that Chris and Kelly shared had been tossed as if someone was looking for something and the couple’s dog was gone. So either Chris had been taken or he had made a run for it without his wife though the other possibility could be that both those things happened. Chris had packed up their stuff because he had wanted to leave town and someone had merely come by afterward to search the place. Yet, there was always the same questions. Why was Chris running and why didn’t he care enough about his wife to file a missing person’s report? Kelly apparently thought that her husband was in trouble and that her husband forgetting about her had been a misunderstanding.

Only it wasn’t and there appeared to be a good reason behind that. NCIS believed that Chris might have tried killing his wife because of the pricey life policy he had out on Kelly. The policy was for half a million dollars and that was a lot of money for a night watchmen. Though what NCIS suspect the husband was the fact that someone had clearly arranged for Kelly to be taken by Olek Lazarenko and they had even messaged the kidnapper to tell him what he could do to Kelly. So Kelly had been hated by someone and she eventually admit that her husband could still be upset with her for the affair she had a while back.

So Kelly could understand why others might suspect Chris however she still didn’t want to believe that her husband arranged her kidnapping or that he had been planning on killing her. Kelly had said that she and Chris had been working through their problems and trying to rebuilding their marriage. Which was something that had also been corroborated by Kelly’s own sister. Yet, Kelly’s own sister had been holding onto Kelly and Chris’s dog so she some questions to answer herself. And so Kelly’s sister eventually admitted with great reluctance that Chris had stopped by and had asked her to watch the dog because he was going out of town.

Only Chris didn’t town. There had been no evidence that he had bought a plane ticket and he hadn’t showed up to meet his wife at the airport. So it simply didn’t make sense for a man like Chris to just get up and go on the run. Chris had allegedly been a mere night watchmen and therefore they shouldn’t be any reason whatsoever for someone to target Chris or his wife. However, Chris’s accounts had showed in the end that he had managed to get his hands on millions of dollars and none of it had come out of the policy he had on his wife. Instead the money had come from a shell company called QFire.

QFire was a shell of a shell type of company so no one knew who exactly owned it. But a guy in the department did end up linking QFire to a name. He linked it to Leonard Weiss. Weiss was a military contractor and he had several contracts with the US government. So Nick later had to reach out to some of his old contacts just to get some information on Weiss and it wasn’t pretty. Weiss according to the story had found out that Chris had taken some money out of his shell company and had kidnapped Kelly in order to get his money back. And so Weiss could be guilty of lot more than kidnapping.

Weiss could also be accused of murder. Chris’s body for instance, had been found in the end at the airport in the back of his own car. So Weiss might have killed Chris once he realized that he didn’t have Kelly in his custody anymore and was never going to get his money back. Though Weiss was denying everything and he actually sounding as if he was telling the truth when he said he wouldn’t go to lengths for three million dollars. He was a billionaire after all and so Dale who had been helping NCIS had taken another look at the files that Nick had been given. And he figured out that they were fakes.

Chris hadn’t stolen three million dollars and an investigation into what Chris was doing showed that he had been an inside source for some journalist. Chris had apparently found out that the company he worked for was fraudulent and so he had collected enough evidence to give the Washington Leader. But he hadn’t been able to go through with handing it over because his wife had been kidnapped and the kidnappers had demand the SD Card in exchange. So Kelly escaping from that basement had changed everything once again. She was no longer prisoner and so there was nothing stopping Chris from handing over his SD Card to the right people.

So NCIS only needed to find where Chris had hidden that SD Card and it turns out he had put it in the dog’s new collar. That’s why he had left the dog at his sister-in-law’s and he probably would have told his journalist friend by time he and his wife were escaping. However, that chance never came about and Gibbs was the one that ended up figuring out where the SD Card was. And so Kelly was able to do one last thing for her husband when she made sure that his death meant something.