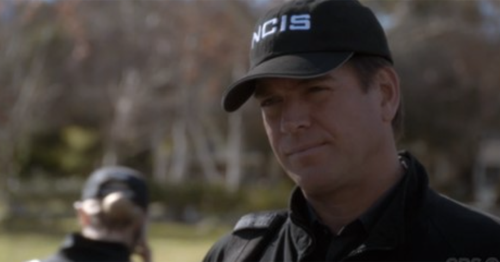 Tonight on CBS NCIS returns with an all new Tuesday February 16, season 13 episode 15 called, “React” and we have your weekly recap below. On tonight’s episode, NCIS and the FBI join forces when the daughter of Sarah Porter, (Leslie Hope) the Secretary of the Navy, is kidnapped. McGee’s (Sean Murray) childhood friend, NCIS Special Agent Valerie Page, (Christina Chang) assists the team with advance tactics training.

On the last episode, a deep sea diver was murdered on the job, and his body and his suspected coworkers had to remain in a high-tech decompression chamber for four days, which forced the NCIS team to undergo an unorthodox investigation from outside the tank. Did you watch the last episode? If you missed it, we have a full and detailed recap right here for you.

On tonight’s episode as per the CBS synopsis, “when Secretary of the Navy Sarah Porter (Leslie Hope) learns her daughter has been kidnapped, the NCIS team partners with the FBI to track the case, determine a motive and bring her home. Also, McGee’s childhood friend, NCIS Special Agent Valerie Page (Christina Chang), is in town to assist the team with advance tactics training.”

Tonight’s episode looks like it is going to be great and you won’t want to miss it, so be sure to tune in for our live coverage of CBS’s NCIS at 8:00 PM EST! While you wait for our recap hit the comments and let us know how excited you are for the season 13 episode 15.

Megan Porter and her boyfriend had simply been taking their time on the way to school when a black SVU appeared out of nowhere and dragged the two teenagers inside, but luckily a witness saw the whole thing. And the Amber Alert had been quickly released by the authorities. Yet, Megan hadn’t just been anyone. She had been the Secretary of the Navy’s daughter and therefore her kidnapping became a crisis.

But, again, NCIS got lucky. Abby had immediately got to checking on the kidnapped teenagers’ cell phone and she was eventually able to turn one of them on. As well as pick on its location.

So Dean Campbell, Megan’s boyfriend, had actually been found alive because of Abby. It seems that while he was not part of the kidnapper’s original plan, they had taken him out of necessity because they hadn’t wanted him to raise the alarm before they managed to make their escape. Yet they did leave him gagged and tied up in an empty parking lot.

And what that means is that whoever had Megan had also not been willing to kill an innocent teenager simply for being in the wrong place at the wrong time.

These kidnappers simply assessed the situation and they hadn’t killed Dean because they had thought he would be harmless. And thankfully that hadn’t been true. Dean had later told the NCIS agents about the second car that the kidnappers had waiting for them in order to transport Megan and surprisingly the teenager had also able to identify the kidnappers’ guns and military lingo. Dean apparently plays hours of video games so he knew what he was talking about and he knew for sure that kidnappers were military trained.

However, Secretary Porter didn’t get to where she was by being friends with everyone. She was a woman in a high ranking position involved with a very traditional institute. So naturally there were some that begrudged Secretary Porter for her rise and possibly felt like her recent take on instilling women into other high-ranking positons within the Navy could be too much for them.

And Secretary Porter had in fact remembered one man in particular that appeared to have a problem with her policies. Commander Christian Broderick it seems had crossed a line when he tried to deny jobs to women under his command and he had also stepped on the Secretary’s shoes by so. Therefore, she fired him and he lost out on a pretty good pension.

But Broderick didn’t seem to bear the Secretary any ill-will. He said she had been to right to relieve him and he had put on a decent show for both Bishop and DiNozzo yet there was just something that didn’t make sense. If Broderick hadn’t wanted revenge on the Secretary, then how was he able to get his hands on ten million dollars?

Ten million is the exact number that the Secretary had taken out on her daughter as an insurance policy. She said that everyone in DC are ask to get ones for themselves and their children though she hadn’t told anyone about that. Much less a man they all believed had been perfectly willing to spit in her face.

So the team as well as Special Agent Fornell and NCIS Special Agent Valerie Page had been wondering about where to look next when suddenly a ransom demands was made. The kidnappers naturally wanted a lot of money but not the full policy on Megan and they specifically asked that Secretary Porter be the one to make the drop off. Which was what she wanted to but no one allowed her to follow up on.

Apparently, the agents had all been in agreement about that one. They said the Secretary to risk falling into enemies’ hands. And so they convinced her to let her ex-husband make the drop off. So Richard Porter and a few hidden agents had later showed up at the meeting place however all was not as it seemed.

The kidnappers hadn’t wanted Richard. Therefore, they waited for him to drop off the money and had even let him see his daughter one last time before they then shot him. And sent off the bombs that were supposed to derail the NCIS agents.

So it hadn’t been just about the money, there had also been another motive. Though the team knew that SECNAV wasn’t going to like.

It seems that her ex-husband’s girlfriend had been the mastermind behind the kidnapping. She was apparently about to lose everything and rather than ask for a loan – she kidnapped her rich boyfriend’s daughter in hopes of extorting Megan’s parents. But the woman’s lies eventually fell apart after they had found her body.

Funny story! It appears that while Justine Wolfe had been prepared to double-cross her boyfriend, the guys she hired hadn’t believed in honor amongst thieves. They just killed her and simply kept the ransom money for themselves.

And it turns out that Justine had hired mercenaries that used to work in a privatized army overseas but who had gotten brought up charges once Secretary Porter found out what they were really doing. So it had always about revenge for those guys and they were going to sneak Megan out of the country to further hurt Megan’s mother.

But Gibbs and his agents showed up. And they were able to get Megan away from her kidnappers so the young woman had been returned to her family at the end of the day.

Although, now, Secretary Porter is wondering if she should quit her job!