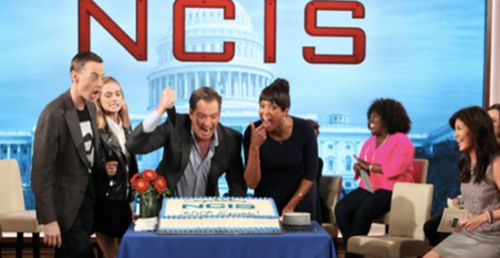 Tonight on CBS NCIS returns with an all new Tuesday, March 15 season 13 episode 17 called, “Scope” and we have your weekly recap below. On tonight’s episode, The NCIS team re-examines an ambush on a group of Special Ops snipers in Iraq after an American couple is attacked in the same area six months later. When Gibbs (Mark Harmon) discovers he needs the account of the lone survivor, Marine Gunnery Sergeant Aaron Davis (Taye Diggs), he tries to connect with the wounded warrior who is being treated for PTSS at Walter Reed Medical Center.

On the last episode, the NCIS agents’ personal plans were interrupted when each of them caught errors in a seemingly cut-and-dry closed case. Meanwhile, McGee and Delilah argued over the importance of not talking about work during dinner; and DiNozzo bored his date with shop talk. Did you watch the last episode? If you missed it, we have a full and detailed recap right here for you.

On tonight’s episode as per the CBS synopsis, “the NCIS team re-examines an ambush on a group of Special Ops snipers in Iraq after an American couple is attacked in the same area six months later. When Gibbs discovers he needs the account of the lone survivor, Marine Gunnery Sergeant Aaron Davis (Taye Diggs), he tries to connect with the wounded warrior who is being treated for PTSS at Walter Reed Medical Center. Laura San Giacomo returns as Grace Confalone. The episode features a special performance by the MusiCorps Band, part of a music rehabilitation program for wounded veterans.”

Tonight’s episode looks like it is going to be great and you won’t want to miss it, so be sure to tune in for our live coverage of CBS’s NCIS at 8:00 PM EST! While you wait for our recap hit the comments and let us know how excited you are for the season 13 episode 17.

An American couple and their guide were targeted in the Anbar Province of Iraq on tonight’s all new episode of “NCIS”.

A sniper had apparently laid in wait for them before he shot and killed all three. Yet, the NCIS Special Agent that was on the ground in Iraq later told the director that there were no witnesses to the crime and that the shot must have been fired miles away. Thereby the Americans that were still in that country were no longer just dealing with insurgents, they were suddenly dealing with insurgents that had seemingly become adept at high powered rifles that they shouldn’t have access to.

So Director Vance had said that the Iraq police could do things their way, but he wanted the Americans to be brought to the states where Gibbs and his people can investigate the crime. Apparently one of the Americans that had been killed was Chief Petty Officer Elaine Dodd and she had only been in Iraq for recreational purposes because her husband had been sent there for his work, And therefore she hadn’t been in uniform or was seen in uniform when she was in Iraq yet the couple had been targeted.

And there must have been a reason for that!

However, Abby ended up doing what she could with the information she received and she found out the weapon used to kill three people had been American. It was called the XR-30 and only an elite group had access to the weapon because weapon was considered highly dangerous. It had the power of gun, yet the mind of a computer. Meaning the sniper didn’t even have to have skill. All they had to do was train the gun on someone and the computer would perfect the shot.

And with a gun like that, that’s why it was only given to people the government knew could handle it. Yet some months ago there had been an incident. An elite group, as in the one that received the gun, had been attacked by insurgents and only one person had walked away from the incident. Gunnery Sergeant Aaron Davis had survived the onslaught but he had lost a leg and also received many injuries to his body that was going to need years of physical therapy.

But there was nothing physically stopping Davis from talking to Gibbs besides his own stubbornness. The Gunnery Sergeant had claimed not to remember a single thing to his therapist and his PTSD had given some the impression he didn’t want to talk about what happened even if he did remember it. So Gibbs had a lot on his hands with Davis. He knew that the man needed time however that was the one thing he couldn’t afford him.

So Gibbs had his people question Davis’s daughter to see if she could give them any insight into her dad. Although her father only saw her the once after he had gotten back and he’s refused to see her for months afterwards because he didn’t want to answer any of her questions. And it turns out she’s pretty into details so questions were her forte.

The teenager had told Bishop and McGee everything she knew about her father and how he used to love to sing. Yet she also mentioned that she got her eye for detail from her father. Who was a sniper himself and probably got a clear look at the group that had attacked his men seeing as he would have been looking at the insurgents from the scope on his weapon. Though Gibbs had come to the same conclusion and that’s why he knew Davis remembered what he saw. And the only reason he had his people running around was because that was the only way to give Davis some breathing room.

And when Davis was ready, he did give Gibbs some good intel. He said he hadn’t gotten clear look at faces what with his hideout and their masks obscuring his view though he had overheard one insurgent whispering to his men. Which hadn’t seemed plausible to Abby because these friends must have been a good distance away, but again Gibbs had figured out what Davis was saying.

Davis had overheard the man whispering because that insurgent had been recording the attack for a propaganda film. A film that should be out there or at most have similar videos that Abby could track. So as she got to working on that, the rest of the guys were following their other piece of evidence. Namely the man that had come into the states on Spencer Dodd’s passport.

Apparently the guys had original believed Elaine and Spencer were targeted because of her job in the navy yet it appeared the real reason they were was because an insurgent knew that he could pass off as Spencer. Then enter the United States where he would go the motel that has been receiving international shipments. That proved to be pieces of the XR-30 that he wanted to sneak into the country.

Thus Abby had a two for one streak of genius. She found herself a new had that gave her bright ideas and thanks to it she was able to find insurgent they were looking for whose real name was Mathew Cross. Cross being a former British SAS agent that had grown up Iraq because of his missionary parents that had stayed on in the region following the Gulf war. And so Cross hadn’t stayed on in Iraq because his business in the states had been personal for him.

Cross had made numerous statements as well as videos in the past where he claimed big businesses were destroying the region and he called them the oppressors. So one of these oppressors proved to be an associate with Saudi Arabia and had oil deals in that country plus many others in the middle east. And ultimately the only way to stop Cross was to shoot him.

Though, thankfully, Gibbs had borrowed Davis’s weapon and he was able to make the shot before anyone else were hurt.

So in a way Davis and Gibbs helped each other. Davis took Gibbs back to his old days as a sniper and Gibbs got Davis to leave his room. And simply face the world again.