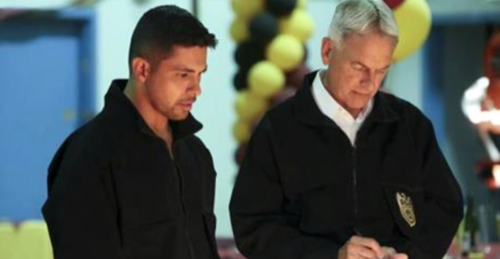 Tonight on CBS the #1 drama series NCIS with an all-new Tuesday, September 27, 2016, season 14 episode 2 and we have your NCIS recap below for you. On tonight’s season 14 episode 2 of NCIS, Torres (Wilmer Valderrama) and Quinn (Jennifer Esposito) adjust to life on Gibbs’ (Mark Harmon) team, including new seating arrangements in the squad room.

Did you watch the last episode of NCIS where, Season 14 began with the NCIS team investigating a deadly car explosion in Washington, D.C., that was linked to an NCIS special agent? If you missed it we have a full and detailed NCIS recap, right here!

On tonight’s NCIS episode as per the CBS synopsis, “NCIS uncovers a bomb plot and a long-running theft ring while investigating a death at a Quantico reunion. Also Torres and Quinn adjust to life on Gibbs’ team, including new seating arrangements in the squad room

Two new members joined the NCIS team on last week’s episode “NCIS” and so tonight was all about fitting in. Special Agents Nicholas Torres and Alexandra Quinn both had very different jobs before so being in the field much less being part of a time wasn’t an easy adjustment for them. Torres had deep undercover agent and so he was unfamiliar with having a boss because he had always just used to report what happened and not exactly ask for permission to follow up a lead. So he wasn’t used to following anyone’s procedure and for that matter neither was Quinn. Quinn had been a teacher and she didn’t have any experience being out in the field.

So their latest case was a test of sorts to see who could hack it and who could not, but it turns out that Torres had been the only one that had officially joined the team. Alexandria had just kind of attached herself to the team and apparently she wasn’t going anywhere anytime soon. She had initially been asked to review Gibbs’s team to see why he had fired so many of her new recruits and now she was merely sticking around because she found Gibbs’s job exciting. They were the ones that flying all around the world and investigating the most dangerous missions. But their latest case involved a Special Forces Officer that might have committed involuntary manslaughter.

The Officer involved, Neal Sherwood, had gone to his High School’s Fifteenth Reunion when an old bully began picking on him. So the former nerd who had trained in the military had decided to stick up for himself and strike back. However, the victim whose name was James Bruno had then had a fit after being thrown to the floor and it had looked as if he died because of what the Officer did though that hadn’t actually been the case. James Bruno was later revealed to have been poisoned. Someone he knew had poisoned his nicotine patch and according to Abby that ruled out his entire graduating class.

James or Jim as he used to be known in High School had gone to the reunion wearing the patch and that meant he had been poisoned before coming to the reunion. Yet, because the team hadn’t known that fact until Abby had worked her magic, they had searched the school to find the poison and had found out that Jim had planted a bomb in his old locker at the school. The bomb itself had been packed enough to level the whole gym where the reunion was so the “victim” had been planning on killing everyone from High School. So what NCIS wanted to know was why? Why was Jim was murdered and why was he going to bomb his old classmates?

NCIS thought the best way they could find answers to those questions was to find out who Jim had become after High School. Though Jim hadn’t amounted to much. He had gone on to take a job that an old substitute teacher had set up for him and even then there were no records of him ever having paid taxes. So Bishop and McGee hade then checked out Jim’s place of residence and they found out he was subletting a room from a woman that seemingly knew him when he was a kid although this woman had thought that Jim had turned his life around since then. And finding out he had been a thief had been a shock.

Jim had had a stash in his room. He had unfortunately been robbing the wealthy neighborhoods and he had been using his accomplice to sell of what he found. But Abby’s DNA test had showed that the accomplice was a woman. So McGee and Quin had waited around until they saw someone shady hanging around and that’s when they found their mysterious accomplice. She didn’t talk to them and she had no identification on her yet she was on the weird side and Torres had been asked to talk to her with Gibbs. And so it wasn’t hard for Torres to realize that cracking their suspect was a test.

Gibbs was supposed to play the bad cop and Torres was supposed to play the good cop. However, neither of them got her name and all they found out was that she didn’t believe Jim could honestly plant a bomb at the school. She said that she knew Bruno and that he was all bark without the bite. So both Gibbs and Torres that maybe she was a little naïve for a thief because Jim’s DNA had been found all over the bomb though they gave her enough credit by checking out who else had been in Jim’s life and they came across some surprising information. Ducky and Jimmy had learned that their victim had forced a diamond earring into his ear and that it might have been a homage.

There had been a second person’s DNA found on the earring and so they had given it to Abby who told Gibbs that the earring belonged to Katrina Cooper. Katrina was one of the most popular girls at High School when she attended it with Jim, but she had gone on to marry the amazing jock and their lives were vastly different than how Jim’s turned out. So Torres had gone with Bishop to talk to Katrina and they were trying to get her to admit that she had been in a relationship with Jim when they heard the gunshots. And followed the sound until they found Neal Sherwood.

Neal had been the nerd in High School so finding out that he had been hanging around with the popular girl and the top jock had been a surprise. Yet, Neal’s death had had some ramifications. Neal had left behind a suicide note and the note details how he had been a part of the robbery ring with Katrina, her husband Adam, Jim, and the Angela. Angela had been the woman that refused to give up her name so finding out that she had gone to school with the others and that the only time their paths all crossed was at Saturday detention had made sense. It was the Breakfast Club all over again.

The group had met in detention and had all become friends. So that time when Jim was “picking” on Neal had been Jim doing a favor by making Neal look good in front of the ladies. Though if all those people were his friends then who killed him and, well, the answer came from a surprising source. One of Jim’s teachers had told him about Jim’s Landlady and the woman that had looked so frail had proven to be a murderer. She had set up the bomb and she had been planning on leaving town with the money that she stole from Jim as well as some of what he fronted her.

And the frail woman was eventually shown to have perfect eyesight, hearing, and walking capability when she got arrested trying to leave town.