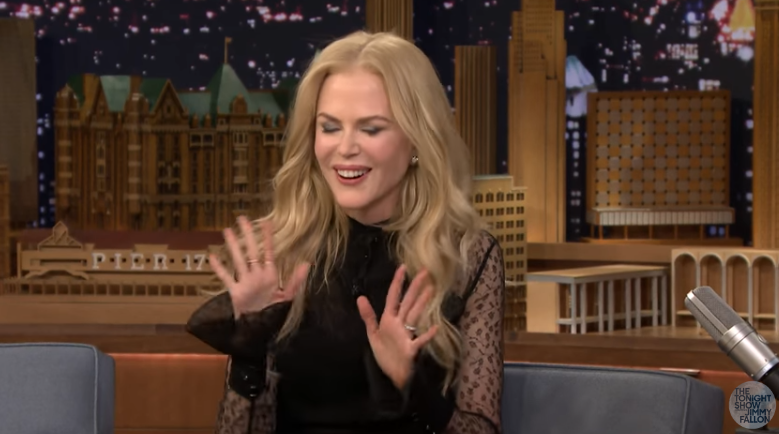 Nicole Kidman just can’t seem to shake when Jimmy Fallon had the chance to hook up with her, but didn’t. She visited “The Tonight Show” a while back to confront Fallon about the incident in which he very visibly blushed about. Nicole then recently returned to the night time talk show and revealed that there was a second time he could have made up for the awkward “date” they had before but Jimmy clearly STILL didn’t get the hint. However, this visit was interrupted by her husband, Keith Urban, who she enlisted to “take care of her”.

Nicole Kidman visited the late night show to promote her new movie “Lions” and when Jimmy Fallon led the conversation with bringing up the last time she was there. That’s when the interview got awkward and the two stars started giggling and laughing again.

The time that Fallon was alluding to was when she visited the show in in January of 2015 and Kidman confronted the talk show host about an incident that happened a few years back. Kidman had a crush on Fallon and actually went over to his apartment where it would have been the perfect time to make a move on her but Fallon clearly wasn’t interested.

It turns out that Fallon wasn’t uninterested, he was just oblivious to the fact that Nicole Kidman was actually into him! It wasn’t until that interview that Jimmy realized that he could have actually dated Nicole Kidman. The whole interview turned Fallon as red as a beet and went viral within 24 hours.

Fast forward to Nicole’s return to the show on November 17th and even more details of the what could have been hot celebrity couple “Nimmy” or “Jicole” emerged (had Jimmy taken the hint). She revealed that he had a second chance to redeem himself at director David Fincher’s house. She expected him to ask for her number but instead Jimmy completely ignored her confirming her theory that he wasn’t interested.

Once again Jimmy was shocked by the fact that she once could have been Mrs. Jimmy Fallon. Before things got too reminiscent, Keith Urban crashed the interview, plopped his wife on his lap and confronted Jimmy about his past with his wife. Hopefully neither Nicole or Jimmy get in trouble with their spouses after the show for the cheeky part two of a “what could have been” memory between the two.

After watching the interviews and seeing that Nicole Kidman brought the awkward ordeal of being snubbed by Jimmy Fallon up for the second time, do you think she still has a crush on Jimmy? Or do you think that it’s just a joke? Let us know in the comment section below. Come back to CDL for all the hot news on Nicole Kidman!