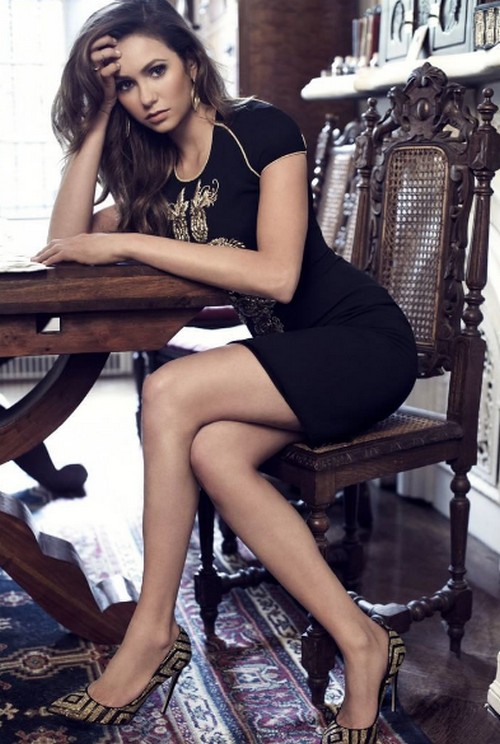 Nina left ‘The Vampire Diaries’ back during season 6 but now that the show is ending, television execs want her to come back, especially considering how the show’s ratings plummeted after her departure. There have been rumors of Nina’s ‘The Vampire Diaries’ finale return for months now, but the actress has made no promises to fans that she will indeed return.

Of course, everyone knows that Nina returning to ‘The Vampire Diaries’ would put Ian’s marriage at risk. The actor would have to resist working and seeing his super sexy ex-girlfriend everyday, leaving his wife Nikki jealous over their working relationship and worse, furious over anything that might transpire once the cameras stop rolling.

Of course, Nikki would be none too happy knowing that Ian Somerhalder and Nina Dobrev would be getting back together again, especially if Nina joined her former co-stars for the final ‘The Vampire Diaries’ season. It’s no wonder that Nikki’s has tried to block Nina’s return to the show by pushing television producers to have her cast in the final season instead.

Surely, Nikki wants to stay married to her husband, but she doesn’t want his ex-girlfriend working with him as clearly she would pose a serious threat to their marriage.

Obviously, Nina has stayed mum over rumors of her return to ‘The Vampire Diaries’ while Ian and Nikki have also said nothing about the state of their marriage, nor have they denied any divorce rumors either. It will only be a matter of time though before fans found out whether or not Nina Dobrev and Ian Somerhalder reunite on the small screen and ultimately, rekindle their off-screen relationship.

What do you think, CDL readers? Would a Nina Dobrev and Ian Somerhalder romance overshadow ‘The Vampire Diaries’ season 8 ending? Or is the actress not returning to the show because she doesn’t want to be labeled as a homewrecker by the media? Let us know what you think by leaving us your thoughts and opinions in our comments section. Also, don’t forget to check back with CDL for all the latest news on The Vampire Diaries!