Nina Dobrev Returns To The Vampire Diaries Season 8 In Best Shape Of Her Life: Damon And Elena Prep For Ultimate Battle? 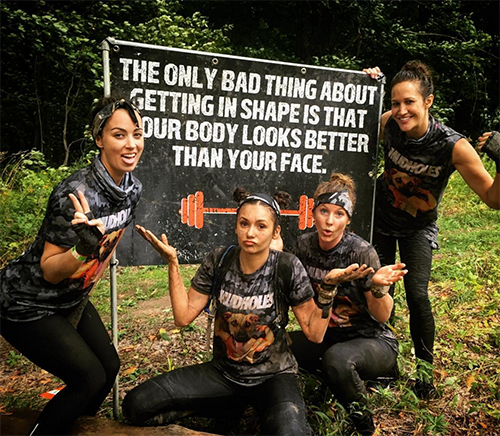 Is Nina Dobrev returning for season 8 of The Vampire Diaries? That’s the question on TVD fans’ minds. Recently, Nina shared some photos that had viewers wondering if the the actress may be getting in shape for a series finale comeback on TVD.

Toronto was the location of the recent Tough Mudder challenge, and Nina completed a seriously physically challenging obstacle course. Nina was a member of Team Mudholes and posted, “Artic Enema, Electric, Shock Therapy, and 10 miles of mud. We survived…Barely.”

Depending how Nina Dobrev’s return has been written into the series finale of The Vampire Diaries, Nina may need to be in the best physical shape of her life. What if Elena comes back to do battle with Damon [Ian Somerhalder] and Stephan [Paul Wesley]?

Maybe that cry out for help at the end of The Vampire Diaries season 7 was a trick to lure Damon into a dangerous situation. There has also been talk that Nina will come back not only as Elena but also as Katherine. Taking on a dual role is physically demanding.

Testing her limitations mentally could be the reason Nina took on the Tough Mudder challenge. Enduring 10 miles of mud and an obstacle course that included an electrified fence definitely puts your mind and body to the test.

Being mentally tough will be necessary in order for Nina to work with Ian Somerhalder again. What woman wants to endure filming love scenes with her ex-boyfriend? If there’s to be a Delena reunion, then there has to be some romance involved, right?

Not only has there been talk about Nina returning for the series finale of TVD, but also that she’ll come back in a dual role as Elena and Katherine. In addition, there’s been buzz that Nina Dobrev will crossover as Katherine to another CW vampire drama, The Originals season 4, for a cameo appearance or two. Talk about physically demanding!

Being a member of Team Mudhole for the Tough Mudder challenge in Toronto could just have been Nina Dobrev participating in a good cause. We hope Nina’s testing herself for a return to The Vampire Diaries season 8.

What a Muddy good time. #MudHoles