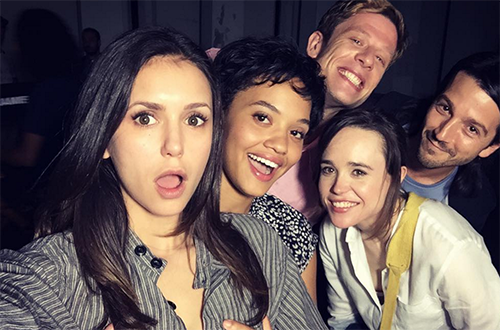 The Originals season 4 would be very interesting if Nina Dobrev were to take on a dual role. Nina most likely isn’t coming back for The Vampire Diaries series finale. But what if executive producer Julie Plec has convinced Nina to bring doppelgangers Tatia and Katherine to New Orleans?

After leaving The Vampire Diaries after season 6, Nina made it very clear she had moved on and would not return to TVD ever. Fast-forward to season 7 finale of The Vampire Diaries when we hear who we think is Elena crying out for help to Damon [Ian Somerhalder].

It was revealed that Nina insisted on coming to the studio to record the cry for help. Plec said that the sound engineers could have taken bits and pieces of Nina’s voice and put them together, it wasn’t necessary for Nina to step foot on The Vampire Diaries lot.

Not long after the last episode of The Vampire Diaries season 7 aired the showrunner publicly declared Nina promised to come back for the series finale. It was no surprise when it was announced at Comic Con 2016 that season 8 would be the final one for TVD.

It’s no secret that former on and off-screen lovers Nina Dobrev and Ian Somerhalder have no desire to ever work together again. So, in order to appease, Julie Plec has Nina agreeing to bring Tatia and Katherine to New Orleans for The Originals season 4?

Let Ian Somerhalder wrap up his role as Damon on TVD and drift off into oblivion. The Originals fans will get the opportunity to know both Tatia and Katherine much better.

The complex relationships on The Originals would give Nina Dobrev an opportunity to really flex her acting chops. Just bringing back Tatia would complicate Klaus [Joseph Morgan] and Elijah’s [Dan Gillies] brotherly relationship even more than it has been for three seasons. Katherine in New Orleans adds yet another layer of intrigue.

A Bug’s life. Looking up at the world like… 🙄 #FLATLINERScrew 🎬