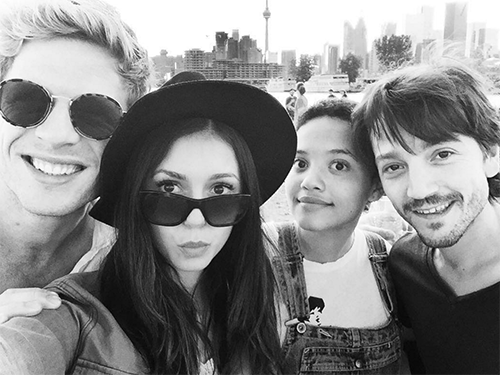 Is the drama between Nina Dobrev and Ian Somerhalder spilling over into The Originals, another CW vampire drama? Is Nina refusing to reprise her role as Elena Gilbert or Katherine Pierce if Ian moves from The Vampire Diaries to The Originals?

Executive producer Julie Plec has all but demanded that Nina come back for The Vampire Diaries series finale. Fans don’t care how Nina returns for season 8 of TVD – Elena or doppelganger Katherine. Either character could easily be incorporated into season 4 of The Originals, and beyond, but Katherine has a history with the hybrid vampire-werewolf Klaus Mikaelson [Joseph Morgan].

Here’s what fans think may happen in order to move Nina from The Vampire Diaries and onto season 4 of The Originals. The voice calling out to Damon at the end of season 7 of TVD isn’t Elena but Katherine. Someone has to respond to the pleading female, but will it be Damon or Stefan [Paul Wesley]?

If Julie Plec, showrunner for both CW dramas, intends to bring Katherine and Damon back together, it means that eventually Ian Somerhalder might join the cast of The Originals. It may not be for season 4 because Ian needs to wrap up season 8 of The Vampire Diaries, but the actor might have a quick cameo to help Katherine escape Mystic Falls for New Orleans.

As everyone knows, Ian has no desire to work with Nina Dobrev – and she’s not too keen on the idea of doing an onscreen tango with her ex, either. But, Ian needs work after TVD wraps up the series finale. Let’s face it, The Vampire Diaries might be Ian Somerhalder’s last big acting gig unless the actor has an offer to join The Originals.

Nina Dobrev has a red hot movie career and doesn’t need to bother with either The Vampire Diaries or The Originals. Executive producer Julie Plec is the one making a big deal about Nina returning, keeping emotional promises, etc.

There’s no use in adding Ian Somerhalder to the cast of The Originals if Nina Dobrev refuses to work with ex-boyfriend Ian. It would be better to have Nina join The Originals cast as Katherine and forget about Ian.

The storyline possibilities for Katherine versus Klaus are nearly endless. Fans of both shows would love to see Katherine join forces with Marcel [Charles Michael Davis] and Rebekah [Claire Holt] to keep Klaus from taking back what the hybrid believes is rightfully his.