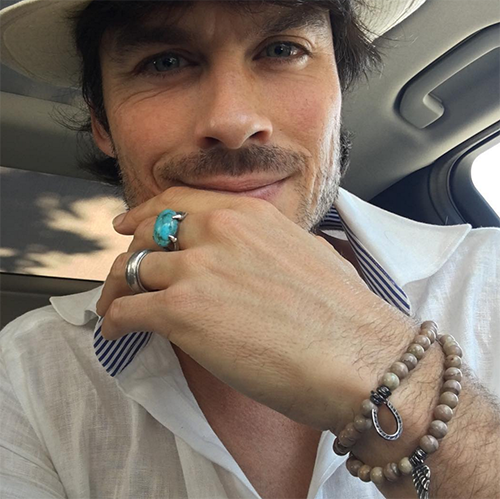 Ian Somerhalder and TVD executive producer Julie Plec are at war over ‘The Vampire Diaries’ season 8. Plec has publicly, and repeatedly, stated that Nina Dobrev promised to come back for the series finale. Ian wants nothing to do with Nina returning for any reason.

Julie Plec ignored what Ian Somerhalder said and started going on and on about Nina Dobrev keeping an emotional promise to return for the final season of TVD. That’s when Ian really lost it at ‘The Vampire Diaries’ Comic Con panel discussion. “I thought we had a conversation about that, apparently not,” a confused Ian directed at the showrunner.

Did the actor and the executive producer have some kind of secret conversation? Did it consist of Ian stomping his feet and refusing to work with Nina? The showrunner probably tuned Ian out and went about her day.

Understandably, Ian doesn’t want to work with ex-girlfriend Nina. Maybe Nikki demanded that Ian have a talk with Plec about an Elena and Damon TVD season 8 reunion. Especially when there has been constant speculation that Ian’s marriage to Nikki Reed is headed for divorce court.

Ian Somerhalder doesn’t get to decide who returns for the TVD series finale. Ian’s not running the show – that’s Julie Plec’s job. Ian is just a minimally talented actor who may or may not work in Hollywood after ‘The Vampire Diaries’ series finale.

Does it really matter anyway? Nina Dobrev didn’t put anything in writing about returning did she? This is all nonsense about honoring emotional promises. Who in Hollywood honors emotional or verbal promises? No one – that’s why people sign contracts.