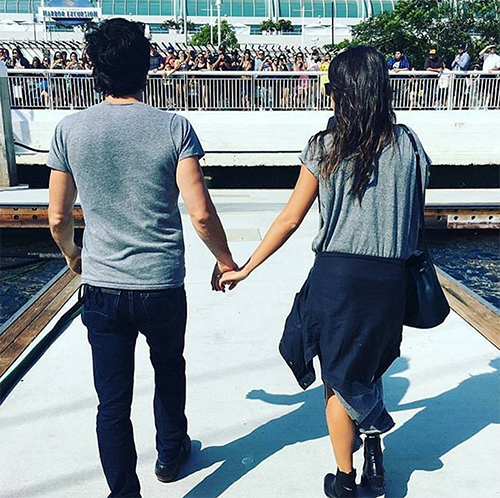 Everyone wants a Nina Dobrev and Ian Somerhalder reunion for season 8 of ‘The Vampire Diaries.’ Executive producer Julie Plec definitely wants it to happen and TVD fans are clamoring for an Elena and Damon reunion. The only one who doesn’t want a steamy reunion of The Vampire Diaries co-stars is Nikki Reed.

Nikki and Ian are having marital problems, according to recent reports. If Nina does return for the final season of TVD, and there is a lot of conflicting information about whether she will or not, it could signal the end of Nikki and Ian’s marriage.

Recent reports indicate that Nikki has joined the cast of The Vampire Diaries. That speculation began when a photo was shared on social media of Nikki at a TVD season 8 cast dinner. Was the actress written in, all in an effort to appease Nikki because Julie Plec is publicly pressuring Nina Dobrev to return for The Vampire Diaries series finale?

At Comic Con 2016, the executive producer reminded Nina that an emotional promise was made and Nina better keep her word. Whatever it takes, Plec is going to make Nina come back for TVD’s series finale.

Another hint that Nikki Reed and Ian Somerhalder are headed for divorce is a weird Instagram post from Ian following Comic Con in San Diego. Ian and Nikki are holding hands with their backs to the camera in the photo. But that’s not the odd part.

What Ian wrote with the photo should be a dead giveaway the actor’s marriage to Nikki is nearing an end. “My ‘Wifey’ aka my bad***-life partner. Thanks for starting our production company with me and making all of my crazy dreams a reality.”

Why put wifey in quotations marks and call Nikki a bada**-life partner? Ian could have written wife and life partner, but that’s a bit redundant. Why not just write amazing wife?

Nikki Reed and Ian Somerhalder building a production company is no guarantee the couple won’t divorce. Nina Dobrev returning for season 8 of The Vampire Diaries? That just might be a deal breaker.