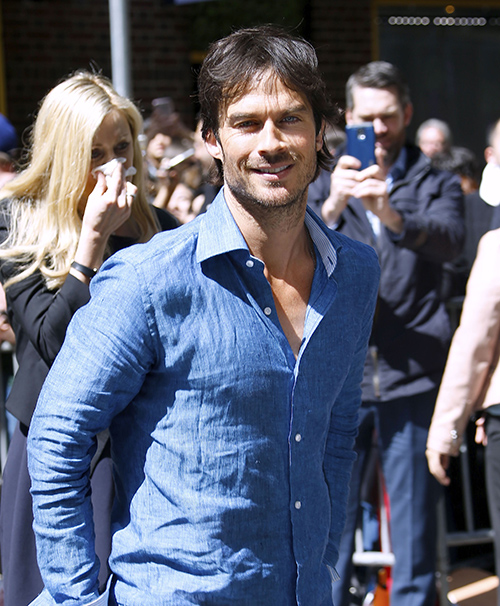 A Nina Dobrev and Ian Somerhalder reunion is something the fans want to see in season 8 of “The Vampire Diaries.” Their sizzling on-screen chemistry has never failed to amaze the viewers. But latest photos revealed by series creator Julie Plec shows Nikki Reed in the cast reunion. Is Nikki Reed joining the season 8 cast? Does that mean an Ian-and-Nina reunion will not happen?

Nina Dobrev and Ian Somerhalder were TV sweethearts and were famous for their off-screen display of affection as a real-life couple. However, in 2013, the couple broke up and the fans have been waiting for a potential reunion ever since. Rumor has it that Ian and Nina will come together again in season 8 of “The Vampire Diaries,” as producers want to keep the show afloat. However, Nikki Reed doesn’t want that to happen, and for obvious reasons.

According to recent reports, Somerhalder’s marriage to Reed is going through a rocky patch. Due to this reason, Nikki Reed would find it very disturbing to see her husband get intimate with Nina Dobrev onscreen once again. The actress is also worried that getting them together in season 8 might rekindle their old romance.

However, it has been widely speculated that the news of Ian Somerhalder’s reunion with Nina Dobrev in “The Vampire Diaries” season 8 is only a publicity gimmick by The CW. Ever since Dobrev left the series in season 5, fans have been rooting for her to return. They wonder if she will ever portray Elena or Katherine again. However, all hope was lost when Ian Somerhalder announced that season 7 will be his last.

CDL reported that fans of the popular show do not care what role Nina reprises, as long as she is in the same screen space as Damon Salvatore, Somerhalder’s character.

While “The Vampire Diaries” season 8 is rumored to be the last season, Julie Plec assured fans that she will try to get Nina Dobrev back to the show, for one last time. She said, “In my opinion, she was very clear about what she wanted the next step in her life to be, and she’s doing a great job of achieving that. So I’m sticking with my side of the plan, which is to bring her back at the very end.”