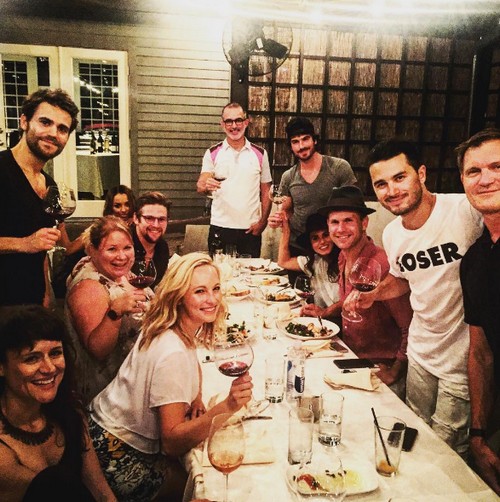 The Vampire Diaries season 8 spoilers tease that Nina Dobrev may not return. Nina was oddly absent from a recent cast dinner thrown by executive producer Julie Plec. What, no Elena and Damon reunion?

Ian Somerhalder must be devastated because previous reports have said Ian thinks Nina Dobrev is The Vampire Diaries savior – the only one who can keep the keep the show from being canceled.

Back to the TVD cast dinner. Julie posted a series of photos – 8 in total so far – on IG to kick off filming for season 8. Nina isn’t in any of the photos has The Vampire Diaries viewers wondering if all the hype about Nina returning is just a publicity stunt to get fans to watch in the dying on the vine CW drama.

Ian’s wife Nikki Reed is front and center in one of the pics Julie shared. Okay, Nikki Reed got invited to the celebratory dinner because the ex-Sleepy Hollow star’s husband Ian Somerhalder is an important part of TVD. But what’s Nikki doing in the photos? It doesn’t appear that anyone else’s spouse or significant other were in the snapshots.

Are Julie Plec and Nina Dobrev on the outs? Julie was adamant that Nina was coming back for The Vampire series finale because that is what Nina allegedly agreed to do. The Vampire Diaries spoilers have repeatedly indicated that TVD season 8 is the final season.

‘The Vampire Diaries’ fans know that Kat Graham [Bonnie Bennett] has already said she is not returning to TVD if the show goes past an eighth season. Ian Somerhalder tweeted in April 2016 that he believed season 8 of TVD is his last also.

Season 7 of TVD ended with Damon hearing Elena crying for help. This sent fans into a frenzy of speculation that Nina was coming back and Elena and Damon would be reunited.

The photos Julie shared could mean nothing at all or it could mean TPTB want to keep Nina’s return as secret as possible. If Nina Dobrev shows up in season 8 cast photos that really lets the cat out of the bag regarding her return don’t you think?

Maybe Nina couldn’t make the dinner because she’s too busy filming ‘Flatliners’ in Toronto with Luna Diego who might be Nina’s new real life boyfriend. Come back to CDL for all your Vampire Diaries spoilers and news!