Nina Dobrev Back To The Vampire Diaries Season 8: Can Ian Somerhalder’s Damon and Elena Love Fest Save TVD From Cancelation? 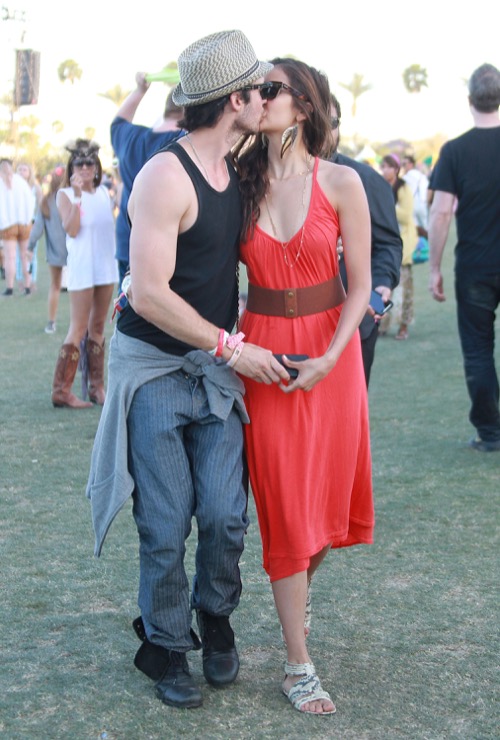 According to The Vampire Diaries executive producer Julie Plec Nina Dobrev is returning for the Season 8 series finale of TVD. Will TVD Season 8 be the final season and is Nina Dobrev coming back to the series as Elena Gilbert or Katherine Pierce for big love fest with Ian Somerhalder’s Damon Salvatore?

The Vampire Diaries fans probably don’t care which character Nina Dobrev brings back as long as Nina comes back. Viewers have been waiting for the reunion between Ian Somerhalder’s character Damon Salvatore and Elena, but at this point Katherine’s return would be acceptable as long as Nina is back.

Ever since Damon heard Elena’s voice cry out for help at the end of The Vampire Diaries season 7 finale there has been speculation about whether or not Elena really died. If Elena Gilbert did die then is Katherine Pierce somehow still alive?

Things could get uncomfortable on the set of TVD if Nina Dobrev returns. After all, Nina would be working with former boyfriend Ian Somerhalder. Love scenes between Nina and Ian would cause a lot of problems for Ian at home since wife Nikki Reed hates Nina.

Nina is also co-starring – if that’s what you want to call it – in ‘The Giving Keys’ campaign with ‘Dancing with the Stars’ alum Julianne Hough. ‘The Giving Keys’ jewelry brand is meant to have a social impact and “celebrate influential loving besties that truly exemplify friendship goals.”

Sounds as if Nina needs to get back to The Vampire Diaries – it would probably be a ratings boost to the dying on the vine CW drama. Kat Graham has already said she is O-U-T after season 8 wraps up filming. Ian Somerhalder has basically said the same thing. Why not get the whole gang back together for one big series finale?

If Nina Dobrev returns, either as Elena Gilbert or Katherine Pierce, that could mean a serious ratings boost for The Vampire Diaries. Maybe Ian and Kat will change their minds and stay on for a ninth season of TVD.