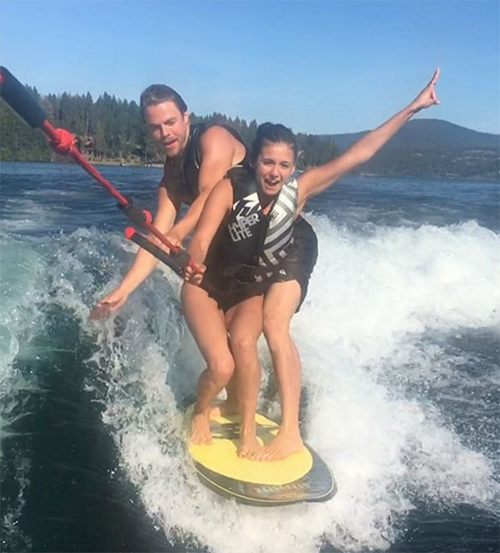 Nina Dobrev’s naked Instagram photo is stirring up a lot of controversy among her social media followers. In fact, Nina Dobrev’s fans think she’s beginning to go into ‘trashy Kardashian’ territory by posting a photo of her half naked alongside her friends, which included Julianne Hough.

Nina Dobrev reposted the photo on her Instagram account from Julianne Hough, which shows the three women admiring a full moon while half naked. Of course, the photo doesn’t show the entire backsides (or their faces), but just half of their own ‘full moons’ from behind.

While Nina Dobrev no doubt thought the photo was ‘cheeky fun,’ her fans seem to disagree. Many think that Nina Dobrev only reposted the picture to generate some attention since rumors have been swirling that she’s returning to “The Vampire Diaries” to reprise her role as Elena Gilbert for its final season. Others think that she might be going into dangerous Kardashian-like territory, as Nina Dobrev isn’t the kind of public figure to be posting provocative or naked photos of herself on her social media accounts.

Because of that fact alone, fans are reminding Nina Dobrev that she is an accomplished actress thanks to her success in ‘The Vampire Diaries.’ That’s why she shouldn’t flash her bare bottom on social media the same way ‘trashy’ Kim Kardashian and her sisters have been doing for years now. Even though Nina Dobrev shared plenty of candid photos of herself in her bikini, she has yet to pose naked on social media or a major publication for that matter.

Some comments from disgruntled Instagram followers include, “I like Nina Dobrev, but she doesn’t have to pull cheap stunts like this. Her fans know she’s better than this,” along with, “Nina’s biggest mistake was when she started hanging out with Julianne. This is something you’d expect from Kim Kardashian, not Elena Gilbert. Talk about a bad role model, no one likes cheap girls.”

So far, Nina Dobrev herself hasn’t responded to the controversy, nor has she taken the post down from her Instagram account. Is she trying to generate buzz? Is she milking this Vampire Diaries controversy and drama for all it’s worth?

Tell us CDL readers, do you think it’s fair to compare Nina Dobrev and Kim Kardashian? Is Nina Dobrev acting “trashy” for posting the photo? Keep up with CDL for all the latest news on Nina Dobrev and all of your favorite celebrities right here.