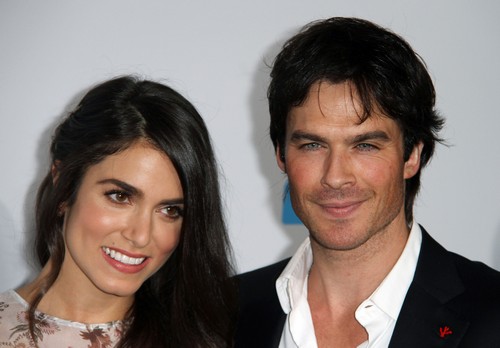 Ian Somerhalder’s obsession over Nina Dobrev’s possible return as Elena for ‘The Vampire Diaries’ season 8 is making everyone crazy. The person bearing the brunt of Ian’s obsession is probably Nikki Reed, who must be ready to file for divorce by now.

The speculation over whether or not there will be a Damon and Elena reunion for the final season of TVD won’t stop. Executive producer Julie Plec is to blame for fanning the flames on the “will Nina return or won’t Nina return” discussion.

Everyone knew season 8 would be the last one for ‘The Vampire Diaries.’ Ian Somerhalder had already announced he was out. Ditto Kat Graham.

Hearing Elena calling out to Damon for help at the end of TVD season 7 renewed fans hope that the CW drama would be renewed past season 8 despite Ian and Kat saying they wouldn’t be back. Nina Dobrev’s return would be a ratings bonanza. Certainly that would change Kat and Ian’s minds?

Directly following the season 7 finale, Julie Plec commented Nina had agreed to return for TVD’s series finale. That simple comment set off a firestorm of speculation that Ian Somerhalder and Nikki Reed’s marriage was in trouble because Nikki doesn’t want Ian involved in love scenes with ex-girlfriend Nina Dobrev.

Julie Plec didn’t make things any better when the showrunner pointedly went on and on at Comic Con 2016 in San Diego about Nina making “emotional promises” to come back for the series finale. That infuriated Ian, who implied that he and the TVD executive producer had a conversation about Nina’s return and it was not happening.

Not only did Ian freak out when Plec made the comments about Nina’s promise, he was dismissive when asked about old faces returning for the final season of ‘The Vampire Diaries.’

At the show’s Comic Con panel discussion, the actor didn’t even give anyone else a chance to say anything, just blurted out no way was that going to happen: nope, not gonna see any old faces back for TVD’s final season.

Why can’t Ian Somerhalder just stop talking about Nina Dobrev’s possible return for the series finale? If we’re sick of the actor’s ego, we can imagine that Nikki Reed is even more fed up. Who would blame the ‘Sleepy Hollow’ actress for filing for divorce?