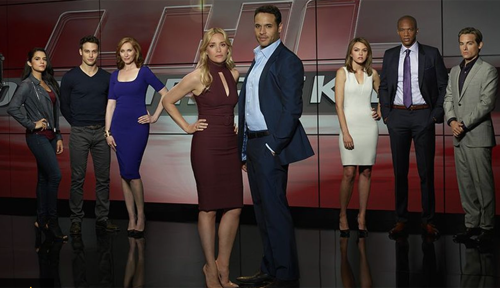 Tonight on ABC their new series Notorious based on the true-life stories of criminal defense attorney Mark Geragos and cable news producer Wendy Walker premiere with an all-new Thursday, September 22, 2016, and we have your Notorious recap below!  On tonight’s Notorious premiere,  the son of the network president tries to rise above his job as a production assistant and a junior producer gets shocking news about her boss’s fiancé.

On tonight’s Notorious premiere as per the ABC synopsis, “Julia George, producer of “Louise Herrick Live” (LHL), the number one cable news program in the country, learns internet mogul Oscar Keaton has been issued an arrest warrant for fleeing the crime scene of a hit-and-run. She wants the exclusive scoop on the high-profile story, and, during a live interview, it looks like she’s blindsiding the mogul’s lawyer and friend, Jake Gregorian.”

So make sure to bookmark this spot and come back between 9PM – 10PM ET for our Notorious recap.  Meanwhile, while you wait for our recap make sure to check out all our television news, spoilers, recaps and more, right here!

TV news producer Julia George has a unique if not interesting relationship with one of the top defense attorneys in the country. Julia and Jake Gregorian apparently exchange info even when they’re technically not allowed to seeing as the media was supposed to be unbiased however they do so in order to manipulate the media to both of their best advantage. So Julia gets higher ratings out the bargain while Jake is able to work the media to best advantage of his client. But ethics aside, the little game they play has some rather unfortunate consequences and one of them was that a murder might get off from the crime.

Jake’s latest client was billionaire Oscar Keaton. Oscar had made his money by building a blogging empire yet he did have one or skeletons in his closet. Such as addiction and the fact he was currently going through some things with his wife. So if anyone else had been allowed to spin what happened which had been a nasty hit and run that led to the death of a teenager, they could have said that Oscar’s marriage troubles led him to slipping after being sober for five years. However, that story hadn’t been allowed to get out because both Jake and Julia had made sure the story they had come up with had been the first one out there.

Jake and Julia, for that matter, had woven a story that had just enough reasonable doubt to get Oscar off the charges. The story they had come up with had been that someone had taken Oscar’s car for a joy ride when that mysterious someone sped through a red light and hit the fifteen-year-old Nathan Llyod. Though the story wasn’t even about the victim, it was about who could have stolen Oscar’s car to commit the heinous crime. So they later followed that up by throwing everyone they could under the bus. Like Oscar’s best friend for instance. Who had access and also a keychain of the car that killed Nathan on his keys.

Yet, Jake hadn’t wanted to openly accuse this friend so innuendo and having the friend look flabbergasted on TV helped through suspicion. So they had been doing a great job by saying that anyone could have been in the car, but then an intern/abused assistant had tried taking the initiative. Ryan had wanted to be taken seriously and get ahead by doing something great for Julia and not because he was the boss’s son so he had done his own investigation work. And unfortunately, he found something. Ryan had followed an associate of Jake’s at the firm and he had recorded the moment she took a bag of cocaine out of Oscar’s car.

Oscar was supposed to be sober so it didn’t matter if what he told Jake had been the truth and he had taken the drugs off of someone that recently had an intervention. What would matter was that video. The video made it look as if Oscar had fallen off the wagon and that would have perjured whatever jury they got at court. So when Ryan gave the video to Julia, she had used it to pressure Jake into an exclusive interview. Julia had told Jake that she had to think of her show first and she was prepared to go with her threat if he didn’t make that exclusive happen.

Julia though didn’t mention what else happened recently and, in spite of her work relationship/odd friendship with Jake, she hadn’t wanted to talk to anyone about her failed engagement. Julia had been engaged to who she thought was a decent man yet he had betrayed her. Her fiancée Eric was revealed by a close source to be a cheater. Though not only did he cheat, he cheated with prostitutes and on the night before he was appointed to the 9th Circuit Court of Appeals. And so revenge had later been sweet for Julia.

She had gone to Eric with what she knew and she had told him that she now had the power to destroy his life. She said that one day, maybe after he ran for congressman or was appointed to the Supreme Court, she would tell everyone about the man he was and she’s destroyed any chance he had at maintaining career. So Julia had told Eric that because she had wanted to hurt him, but she also admitted that she was forgotten about and he was never going to forget about her. And so Julia showed that she had a dark side.

But Jake had his secrets too. Jake had apparently once been in love with Oscar’s wife Sarah and the two had gotten away with the trial going on. So Jake had crossed a line that he swore to his brother he wouldn’t cross and worse he made his mistake with Sarah clouded his judgment. Jake had previously agreed to let Sarah give the exclusive however Julia had called him and rearranged the interview to be a lot sooner than planned. Julia had warned Jake beforehand that the police had surveillance on Sarah and so they were going to issue a warrant for their arrest. And at first, Jake didn’t want to believe it.

Jake had said that couldn’t be possible and the only reason Julia had got him to change his mind was because of the footage the police had. So Jake had gone to talk to Sarah and had asked her for her version of that night. However, Sarah had said she had taken an Ambien before bed and that she couldn’t remember anything afterward so Jake had told Julia to go with the Ambien defense. The drug has been known to make people sleep walk so Jake was going to say that it made Sarah sleep drive when Julia’s go-to girl Megan had found one gigantic hold in the Ambien defense.

Megan had found out that Sarah had gotten the Ambien after she had run over Nathan. So that meant Sarah had only gotten the drug to cover for what she did and that she had lied to everyone about what happened. Yet, Jake had had enough of Sarah’s lies so he was going to hang her out dry on Julia’s show just to be done with her and instead he had later heard from Julia that Sarah wasn’t at the studio. And so Jake had taken Oscar’s phone call and had gone over to Oscar’s because the other man had said it was important.

And there he had found Sarah’s dead body. Oscar claimed he didn’t do it, but later Jake had found out that Sarah had bought a fake passport and was about to go on the run before the car accident. So he and Julia were trying to figure what if not she was running from when Julia got an envelope. Julia had gotten an envelope filled with photos. There was a photo of a bruised Sarah, a photo of Oscar sleeping with another woman, and a photo of Sarah with Jake on their night together.

So that story had simply been too good to share with Jake.