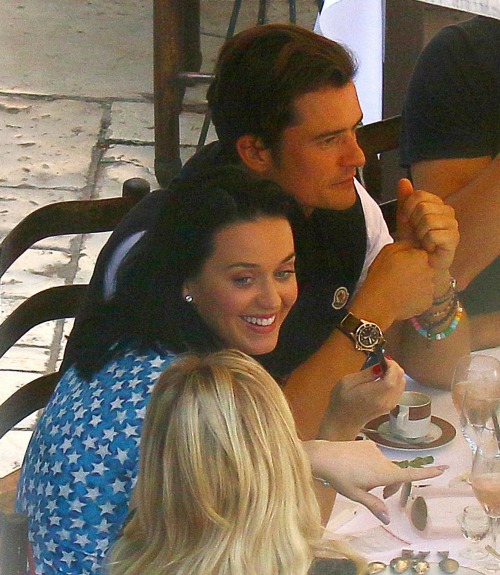 Orlando Bloom, who has already been married once to Miranda Kerr, whom he has a five-year-old-son with, seems smitten by the pop diva and ready to take the plunge, despite having only been dating Katy Perry since January.  According to a People insider: “[Orlando] always gushes about Katy and thinks she is amazing in a million ways.  He would love to settle down with Katy and have more kids.  He hasn’t been this serious about a girl since Miranda.”

Katy Perry, on the other hand, might not be so eager to get hitched following her disastrous marriage to Russell Brand.  According to a People insider: “Katy’s divorce from Russell [Brand] really messed her up emotionally.  She’s not going to rashly make a huge commitment like marriage again unless she thinks it’s absolutely right.”

Despite her obvious reservations, the singer hasn’t completely ruled out a life as Mrs. Bloom: “They’ve been getting along really well.  Katy gives him space, and they’re both pretty independent.  They are serious about each other and their relationship.”

Orlando Bloom may have other reasons for wanting to rush down the aisle with Katy Perry.  The actor has openly been involved in a “clothes-off-pose-off” with Justin Bieber as a result of a feud stemming from the singer dating his ex-wife Miranda Kerr.  Orlando may feel the need to put a permanent claim on his new love before another man intervenes.

Also, Orlando Bloom will be turning 40 soon and may feel that his time to have more children is ticking away quickly.  Katy Perry, on the other hand, is only 31 and does not have any children; with her career being stronger than ever, it may be unlikely that she will want to slow her professional momentum by getting married and becoming pregnant.

Whatever the couple decides, let’s hope they don’t ruin a great relationship by rushing into marriage too soon—Orlando, for once, will have to keep his pants on.

What do you think about this adorable celeb couple?  Will there be wedding bells in their future?  Do you think Miranda Kerr would give the two her blessing?  Will the couple’s honeymoon result in more infamous naked Orlando pics?