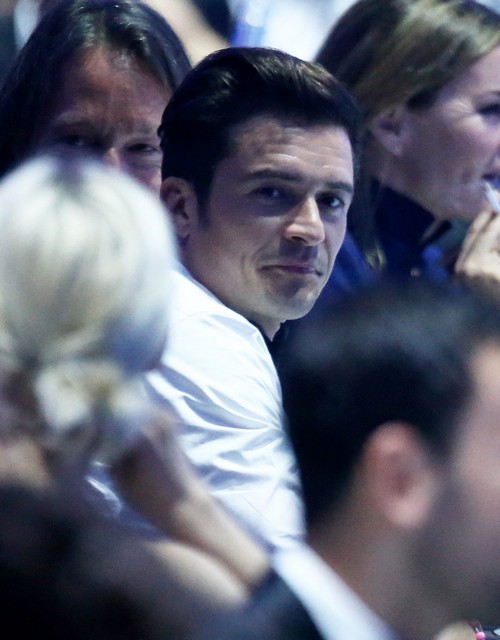 Orlando Bloom’s naked photos have taken the Internet by storm, but it looks like the British actor might have an agenda with Miranda Kerr in mind here. There’s speculation that the actor’s naked photos that were taken during his vacation with current girlfriend Katy Perry were in response to Miranda Kerr and Evan Spiegel’s recent engagement news.

Orlando Bloom and Katy Perry were spotted enjoying their well-deserved break in Sardinia when the ‘Pirates of the Caribbean star stripped down naked while paddle boarding in the water. Orlando Bloom was photographed completely in the buff while his girlfriend Katy Perry opted to keep her bikini on while they paddled in the water.

If that weren’t enough, Orlando Bloom couldn’t keep his hands off of Katy Perry and even gave the paparazzi a full-on PDA session while even grabbing Katy Perry’s backside at one point.

Of course, it isn’t very common for a Hollywood star like Orlando Bloom to be photographed in the buff by the paparazzi these days. Considering how private many celebrities are about where they vacation or who they are seen with, Orlando Bloom roamed around the public beach long enough for the nearby photographers to get the shots they needed.

It’s not to say that Orlando Bloom’s naked romp on the beach was set-up, but it could mean that he’s sending a message to his ex-wife Miranda Kerr through the media. Otherwise, why would Orlando Bloom be comfortable enough to parade around naked on a European beach knowing that his manhood would be splashed on every media and gossip website for all around the world in a matter of hours?

Miranda Kerr and Evan Spiegel’s engagement made headlines recently and if there’s anything that’s going to steal the Australian supermodel’s thunder right now, it’s seeing naked photos of her ex on a beach with Katy Perry.

It’s been long rumored that Miranda Kerr cut the cord on her marriage to Orlando Bloom simply because his Hollywood star was fading. Even though Orlando Bloom’s success with ‘The Lord of the Rings’ and ‘The Pirates of the Caribbean’ helped make him a household name, he’s struggled to become an A-list actor in the industry.

Miranda Kerr on the other hand likes a man with status and power, and that’s why she’s moved on by dating Australian billionaire James Packer and now, Snapchat CEO Evan Spiegel.

Orlando Bloom’s relationship with Katy Perry has managed to stay largely under the radar for now, but his naked photos have definitely given him a lot of publicity, whether it was done unintentionally or spitefully towards his ex Miranda Kerr.

Tell us CDL readers, what do you think? Is Orlando Bloom envious of Miranda Kerr’s engagement? Drop us a line with your thoughts in the comments section below.

March for life is this week! For those of you who don’t know about it it’s a march in Washington, D.C. for an end to abortion and I’m proud to be taking part in it! Is anyone else doing it? If so Comment below! ~Allison