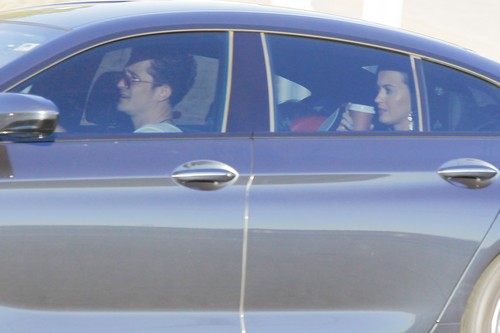 Have the Katy Perry and Orlando Bloom dating stories finally been confirmed? Has all the flirty PDA between the Teenage Dream singer and Pirates of the Caribbean star translated into a real relationship? Katy Perry and Orlando Bloom were spotted out in public once again and were acting like a couple all over. This time, the adorable duo were in attendance together at the swanky Sunset Tower Hotel in West Hollywood, CA on February 3.

The hotel boasts a beautiful Tower Bar where producer Aleen Keshishian’s birthday party was being held, according to Fox News. Also celebrating with Katy and Orlando were Jason Bateman and his wife, Amanda Anka, as well as Jennifer Aniston.

One source told Fox News, “Orlando and Katy had that new-relationship glow about them. They were cuddling and flirting with each other all night.” Hmmm…well. That sounds about right. More of the same lovey relationship they were showing at the Golden Globes after parties too. Back in the old days, repeated outings together translate into what we would call dating. So is that what Katy Perry and Orlando Bloom are doing? Dating? I wonder what Jennifer Aniston or Jason Bateman would have to say about what they witnessed during that birthday celebration?

Another source told Us Weekly, “She’s having fun with Orlando. I don’t think she’s seeing this as long-term yet. It’s a fun hookup thing right now.” Maybe so, but when they are making public appearances on dinner dates, arriving together…well, that is really hard to argue. Katy Perry and Orlando Bloom look like a real couple. Give it a little time, and I would venture to guess we will be getting those ‘rep confirmations’ that Katy and Orlando are in fact an official item.

John Mayer was also reported to be in the same hotel, but apparently he didn’t feel like hanging out with his ex girlfriends, Katy Perry and Jennifer Aniston, so he made a quick escape to his room. Who can blame the guy though, right?

What do you think? Are they already the real deal, just not ready to make the public announcement? Or is Katy Perry holding out a little longer to make it official this time around? Is she waiting to see if Orlando Bloom has staying power? Share your opinion in the comments below then check back here for all the latest news on your favorite celebrities.

Actor Orlando Bloom, his son Flynn Bloom and singer Katy Perry were spotted out for a drive in Los Angeles, California on February 6, 2016. There have been rumors swirling that the pair may have a romance together. Regardless, Orlando is comfortable enough to allow Katy to be around his son as she sits in the back to keep Flynn company on the car ride.