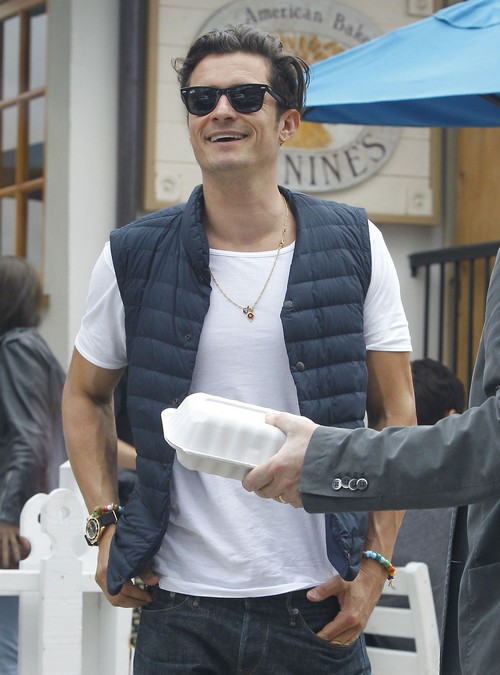 Miranda Kerr and Evan Spiegel’s engagement has made major headlines this past week as the couple made the announcement through their social media accounts after almost a year of dating. And it looks like Miranda Kerr’s ex Orlando Bloom has something to say about it.

With Miranda Kerr and Evan Spiegel’s wedding gearing up to be the social event of the year, everyone can’t help but wonder what Orlando Bloom thinks of his ex moving on with the CEO of Snapchat. After all, Miranda Kerr and Orlando Bloom share a 5-year-old son together, Flynn Bloom and now that Evan Spiegel is going to be a part of his life, the Hollywood actor has every reason to be interested in what’s going on in his ex’s life.

According to E! Online this week though, Orlando Bloom is supposedly very happy for his ex, as both he and the Australian-born model have moved on. Of course, Miranda Kerr and Evan Spiegel aren’t the only hot celebrity couple making headlines, as Orlando Bloom and Katy Perry dating rumors have been dominating the gossip blogs for months now, too.

One source close to the actor said, “Orlando is happy for Miranda. He spoke with and congratulated her.”

It’s a good thing that Orlando Bloom and Miranda Kerr have managed to keep their relationship as friendly and mutual as possible for the sake of their son, Flynn. It also has to be very assuring for the ‘Pirates of the Caribbean’ actor to know that his son’s future stepfather also treats him the way he deserves to be treated. “Orlando knows that Evan treats Flynn well so that’s all that matters to him,” the insider explained, adding, “Evan and Miranda did not have a sit-down with the child to explain their engagement because he is too small to understand.”

Nevertheless, sources added that Evan Spiegal “is very much a part of Flynn’s life” and that the boy “loves” him.

The only thing now is of course, to wait and see what Orlando Bloom decides to do next. With the way things are going in his life, it will only be a matter of time before an Orlando Bloom and Katy Perry engagement makes news soon, too. After all, the British-born actor also plans on getting married and having more kids one day, too.

Check back with CDL with all the latest updates on Orlando Bloom and Katy Perry along wit the Miranda Kerr and Evan Spiegal wedding right here.