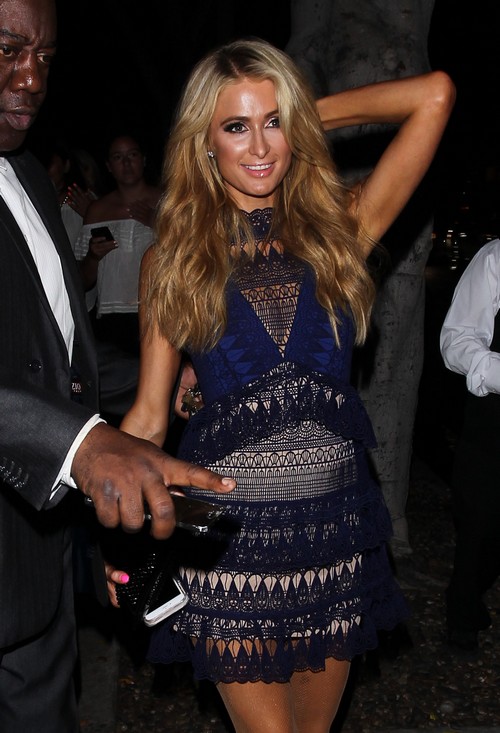 Paris Hilton has apologized to Tara Reid for her and Kim Kardashian’s nasty behavior a decade ago at the Hyde Lounge. As Tara stood outside the club laughing and chatting, Kim breezed by walking arm-and-arm with Paris.

It was quite the slap in the face and 10 years later Paris Hilton is very sorry about how everything went down that night. All of a sudden Tara Reid was out and Kim Kardashian was in and the blonde actress wasn’t even sure what happened.

Kim may not be sorry that Tara Reid got snubbed that night but Paris is. TMZ caught up with the bury businesswoman and socialite at LAX and asked about that night at Hyde Lounge. Paris from offered an apology and said she felt bad about what happened.

We all know Kim Kardashian will never offer up an ‘I’m sorry’ to Tara unless the fake apology gets Kim the good press the Kardashian family desperately needs.

In 2006 Kim was the fresh-faced new girl ( who still has her original pre-plastic surgery face) on the Hollywood club scene. Paris Hilton was hotter than hot – remember ‘That’s Hot!’ – and fresh off the breakdown of her longtime friendship with Nicole Richie. Isn’t it obvious that Kim was using Paris to create a name for herself?

Before that night did anyone know who Kim was? Basically Kim’s only claim to fame at that time was selling stuff on eBay and being the daughter of Robert Kardashian. Kim’s fame would come later when Kris Jenner (allegedly) sold Kim’s sex tape and launched ‘Keeping Up with the Kardashians.’

Oh how Kim Kardashian has changed over the years! Kanye West’s wife has had so much work done on her face when you look back at the video from 2006 you would never know it’s Kim until someone points it out.

It’s pretty obvious that Kim’s had lip injections, a nose job, breast implants, butt implants, liposuction, and hair extensions. Whatever it took to make Kim into the Kardashian she is today.

Tara Reid has never truly recovered from that night outside the Hyde Lounge. The actresses live has been on one drunken downward spiral after another. Perhaps this apology from Paris Hilton on behalf of Kim Kardashian will help Tara Reid get her life back on track.

Paris Hilton is spotted leaving a party in West Hollywood, California on August 25, 2016. Paris recently got back to Los Angeles after her DJ residency in Spain. FameFlynet