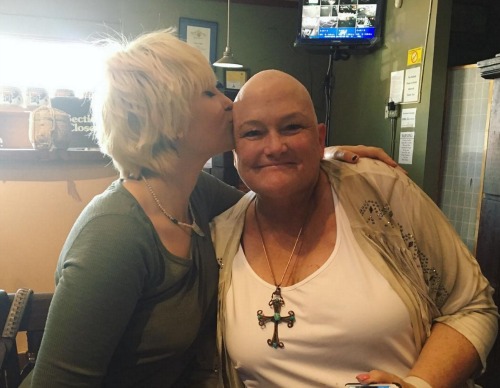 Paris Jackson, Michael Jackson’s 18-year-old daughter, has decided to bury the hatchet and reconnect with her mother, Debbie Rowe, who has been battling breast cancer. Mother and daughter were completely on the outs with each other for several years, but after Michael Jackson’s untimely death several years ago, the two decided to meet up and prove that blood is thicker than water.

This show of solidarity is very unlike the Jackson’s; a very private and tight knit family that likes to keep its cards close to the heart.

In an iconic image posted on Instagram, Paris Jackson is seen kissing an emaciated and bald Debbie Rowe on the cheek. It’s a sweet reminder of time lost over silly squabbles. The caption reads, “I’m a fighter because she’s a fighter. [L]ove you mom.” It must have been a liberating experience for both, because the Jackson family is infamous for its underhanded and quite absurd dealings with those who went against the family’s grain.

According to People Magazine, “Rowe and Jackson, who were married from 1996 – 1999, had two children together: Paris and Prince Michael, 19. The former dermatology nurse is not the mother of Jackson’s third child, Prince Michael II, 14, who was born to a still-unidentified surrogate mother.”

Rowe has been chastised by the family in the past. Although she’s the mother of Jackson’s children, Michael’s mother, Katherine Jackson, was granted full custody and guardianship over his children. It has stayed that way ever since.

It is extremely bizarre to see one of the Michael Jackson children reach out like this, especially when it involves someone who hasn’t always been the family’s favourite person.

However, with all being said and damage done, it is an endearing and quintessential picture of familial bonds that can never be broken by time or money. It is powerful and fundamentally life changing.

We wish Debbie Rowe good health and happiness moving forward. As for Paris Jackson, we are overjoyed that she finally had the courage to reconnect with her mother and make peace during these difficult days.

What do you think? Will the Jackson family approve? Can Paris Jackson salvage her relationship with her mother? Let us know your thoughts in the comments below and come back to CDL for all your Paris Jackson news and reports.

i’m a fighter because she’s a fighter. love you mom