Person of Interest Recap Premiere Recap – The Machine is Back: B.S.O.D. – Season 5 Episode 1

BY Amanda Austin on May 3, 2016 | Comments: one comment
Related : Person of Interest, Recap, Television, TV 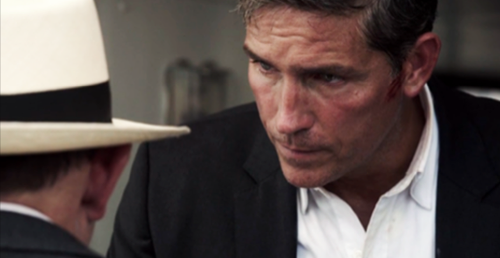 Tonight on CBS Person of Interest continues with an all new Tuesday May 3, season5 premiere called, “B.S.O.D.” and we have your recap below. On tonight’s episode, Reese (Jim Caviezel) and Finch (Michael Emerson) attempt to rescue the Machine’s source code before it deteriorates beyond repair.

On the last episode, Finch and Root raced to save The Machine, which had been located by the rival AI, Samaritan. Did you watch the last episode? If you missed it, we have a full and detailed recap right here for you.

On tonight’s episode as per the CBS synopsis, “Reese and Finch attempt to rescue the Machine’s source code before it deteriorates beyond repair. Also, Root fights for her life against an onslaught of Samaritan’s agents and Fusco is faced with hard questions following the deaths of Dominic and Elias.”

Tonight’s episode of Person Of Interest kicks off with Root’s voice. She states, “If you can hear this then you are alone and the only thing left of us is the sound of my voice. Did we win? Did we lose? I don’t know, I’m not even sure I know what victory would mean any more. But either way … it is over.”

Reese is running through a dark alley with a brief case. Men are jumping out of the dark and attacking him, but he fights them off and keeps moving. He hops in an Uber outside of a club and makes a run for it as men chase him with gun and shoot at the car. Finch is being chases by similar men on the street in broad daylight. He hops on a nearby bus and manages to get away. Root is sitting in her car at a red light when a black SUV slams in to her. Men hop out and fire shots at her too – she shoots back and manages to get away.

Fusco is at the police station – he calls someone and leaves them a panicked voice mail and says everything is blowing up in his face. After he hangs up, FBI Agent Leoux pays him a visit and says that they need to talk.

Reese is on the dock, and another man shows up and tries to get the briefcase with the machine in it. Finch shows up at the last minute and hits him over the head with a pole, saving Reese and the machine. There are cameras all over the city, they’re never going to be able to get away. Reese convinces Harold to get on the ferry with him, he says they can send for Root later.

Fusco sits down FBI LeRoux, they have some serious questions about the Dominic case. The evidence collected from the crime scene doesn’t add up. Fusco tells them that he pulled his gun, but someone else shot the kingpins. He thinks there was a sniper on the roof.

On the ferry, Finch and Reese have a new problem. The machine is dying – somehow it must have gotten damaged when Reese was fighting off the operatives. They need to get back to the Subway so that Finch can try to fix it before it is too late. While they are on the ferry Harold has a flashback to when he was first building the machine. He was skeptical that the machine would someday superpass humans and create total chaos. It looks like he was right.

Root is riding on the subway in a car full of passengers. A news bulletin is texted to all of their phones with photos of Root walking down the street with a gun. A few guys on the subway decide to try and be a hero and take down Root but she fights them off. The door opens and she runs off the car, but a NYPD officer is standing there with a shotgun waiting for her.

Reese and Finch arrive at their secret location at the subway. Samaritan hasn’t figured out its location yet – they still have power, and no one has been there. But, Root isn’t there – which means she must be in trouble. And, Finch looks at the briefcase and realizes that the Machine’s light is no longer blinking – it’s completely dead.

Reese calls Lionel back, he explains that he thinks Samaritan took out the two kingpins and may have sniper abilities now. Reese tells him to keep his conspiracy theories to himself, or else he will be one of Samaritan’s next targets. HE tells Fusco he needs the departments’ reports for the last 24 hours, so that he can find someone.

Root is walking down the street with the shotgun from the cop in the subway, apparently she had her way with him too. More operatives fin her and try to take her out, but she slips in to a building. Two men at the warehouse ask her what she is doing there. Root says she has came for Bela Durchenko.

LeRoux calls Fusco back in to the interrogation room. He tells Fusco that he must have hit his head and doesn’t remember shooting Dominca. But, they tested his gun and he is definitely the shooter. LeRoux congratulates him and tells him he is a hero. Fusco is skeptical, but they won’t let him see the lab reports on his gun.

Root tells Bela that she came to see him because he is one of the best hackers and she needs a new identity. Plus, his warehouse happens to be in a camera-free zone. Bela agrees to help her, since she is an old friend and he owes her a favor.

Meanwhile, at the subway, Finch is working on the Machine. He finally gets it fired up and it starts decompressing and the lights start flickering. He panics because there is not enough room for the data and the machine is going to kill itself. He unplugs the electrical cords and is shocked by the current and thrown on the floor.

Reese walks in to the police station – Lionel is not thrilled to see him. But, he does have the incident reports that Reese asked for. Reese recognizes the woman in the report form the subway as Root and rushes off to find her. Lionel demands answers from him, he rants that he feels lie he is living in the twilight zone. Reese promises him that they will talk later.

Fusco can’t let it go. He heads to the crime scene where the shooting took place. He looks in a drain and finds a bullet that didn’t come from his gun. Now he has proof that he wasn’t the only shooter.

Meanwhile at the warehouse, Bela sells out Root. He gets a phone call from the operatives and agrees to hand her over to the them for a price. Obviously they played him, the operatives arrive and shoot and kill Bela – and then inform Root that they are taking her in.

Reese shows up in the nick of time, he tells Root he will cover for her, she needs to get back to the subway and help Finch. Root has other plans – she tells Reese to go steal a truck, they are going to have to steal about 300 video game consoles from the warehouse.

Root tells Harold that “history is upon him” and he plugs in the final cord – it’s a success, the machine is up and running. It continues decompression – but the video game consoles start over heating. Reese runs up above ground and grabs a tank of nitrogen to cool down the servers. Crisis adverted, decompression complete, the Machine is back!