BY Kristine Francis on May 10, 2016 | Comments: one comment
Related : Person of Interest, Recap, Television, TV 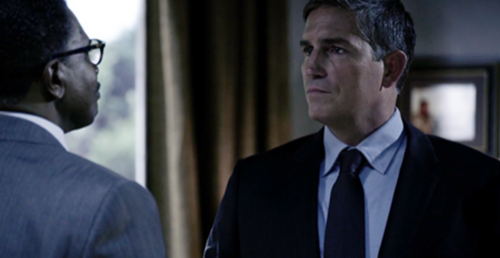 Tonight on CBS Person of Interest continues with an all new Tuesday May 10, season 5 episode 3 called, “Truth Be Told.” and we have your recap below. On tonight’s episode, Reese’s cover is threatened due to his latest POI.

On the last episode, a glitch caused the Machine to supply Reese and Fusco with the numbers of people not involved in crimes. It also locked out Finch and Root after identifying them as threats. Did you watch the last episode? If you missed it, we have a full and detailed recap right here for you.

On tonight’s episode as per the CBS synopsis, “Reese’s cover is threatened due to his latest POI, who has ties to his former CIA colleagues.”

Reese’s cover as a NYPD detective was at risk on tonight’s episode of “Person of Interest” when his two world unfortunately collided.

Lately Reese has been trying out what a normal life would look like and so he recently agreed to meet his girlfriend’s parents. However, because of his other “job”, Reese had had to ask the older couple to dinner at a pirate themed Restaurant. He told Iris that he was working on a case in the nearby area so she had used that to placate her parents who were feeling a little disgruntled. Only they nearly had a run-in with the man that Reese protected. And the only way to throw off suspicion was for Reese to make a joke of all things.

Reese generally isn’t known for being the joking time however that just showed how much Iris meant to him because he tried to make things perfect for her. Yet, that near miss wasn’t Reese’s first one and it wasn’t his last. Reese had later taken on a new number that The Machine had provided though the Machine was still working through some technical difficulties. While it was finally able to deliver reliable numbers, it wasn’t so great on providing reliable information.

Therefore, it was a good thing that Finch had already created an alias for Reese long before they lost access to most of the Machine’s resources. Though spying on Alex Duncan and going to work at Anderson Rake Consulting had ended up putting Reese at risk. Reese had apparently tried to befriend Duncan as a way to get closer to him, but he had been rebuffed. Duncan hadn’t politely refused his invitation to grab drinks afterwards because he had been planning on stealing files from the building. And not long after he stole said files, Reese spotted several CIA operatives pick him.

And one of the people that had been with the operatives had been Beale. As in Reese’s former boss and the one man that could identify him if he were seen rescuing Duncan from their clutches. Therefore, Finch had later told Reese that maybe it would be too much of a risk. He said that they didn’t know what Duncan had stolen from the security firm and whether or not he committed treason. So Finch actually suggested that maybe Duncan was in the right place with the right people.

However, Reese disagreed. Reese said that Beale and his men didn’t give anyone due process and that they would only trample over his civil liberties. So he made it his mission to save Duncan and tried to protect his cover as much as possible. And while he might have made Beale remember a ghost, it had seemed like he was in the clear when he got Duncan out of the building and brought him to an upscale hotel. Which again made Finch believe that protecting Duncan was costlier than they either of them planned.

Only Reese didn’t let a little something like that stop him from wanting to help Duncan. So he later asked Duncan just what he was doing back at the office and Duncan told him about his brother Paul. Paul had practically raised him before he enlisted and, afterwards, Duncan felt like he didn’t know his brother anymore. Yet, after Paul’s death, Duncan wanted at least some answers as to why his brother had been accused of treason.

So when Duncan asked about this brother, he finally got a look at Paul and realized that he had killed Duncan’s brother several years ago on orders from Beale. Apparently Beale and some other very powerful people were connected to a case that Paul had gotten involved with and so they had thought Duncan was looking into that case rather than just looking for answers. And so when Reese did figure out how much danger they were in, it was too late.

Beale had used all the resources at his disposal to track them down and he had taken them both into custody before Finch even knew something was wrong. Finch and Root had figured out someone was spreading malware through shipments that would connect any and every electronic device to Samaritan. So Finch had wanted to stop it, but Root said that they should trust the Machine. Who she felt wanted the malware to go ahead.

And so there were having a disagreement over policy when Reese rescued himself. Reese got Duncan out of Beale’s hands and he decided to let Beale live knowing that he was alive. Though he had some reassurances. He later told Beale that if his people tried to come after him or Duncan then he was going to release information on the classified file that would end in more than one arrest. So Beale agreed to keep his distance and in exchange Reese got away his lie to Duncan.

Duncan had wanted to know how his brother died. So Reese had said that Paul wasn’t a traitor and that he had merely been in the wrong place at the wrong time. Although the truth was that Paul had been accepting briberies to report on his men, so Reese had only lied because he had wanted Duncan to know that his brother hadn’t died the hero he had hoped he was.