BY Kristine Francis on May 9, 2016 | Comments: one comment
Related : Person of Interest, Recap, Television, TV 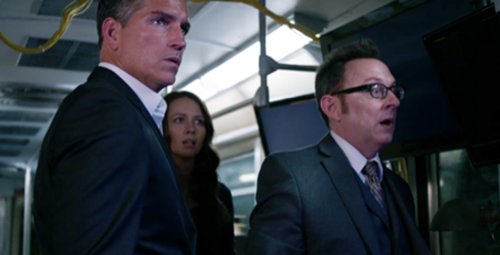 Tonight on CBS Person of Interest continues with an all new Monday May 9, season 5 episode 2 called, “SNAFU.” and we have your recap below. On tonight’s episode, a glitch causes the Machine to supply Reese (Jim Caviezel) and Fusco (Kevin Chapman) with the numbers of people not involved in crimes.

On the last episode, Reese and Finch attempted to rescue the Machine’s source code before it deteriorated beyond repair. Also, Root fought for her life against an onslaught of Samaritan’s agents and Fusco was faced with hard questions following the deaths of Dominic and Elias. Did you watch the last episode? If you missed it, we have a full and detailed recap right here for you.

On tonight’s episode as per the CBS synopsis, “a glitch causes the Machine to supply Reese and Fusco with the numbers of people not involved in crimes. It also locks out Finch and Root after identifying them as threats.”

Finch had tried to get the Machine back online on tonight’s episode of “Person of Interest” however she wasn’t like she used to be.

Finch and Root had run analysis on her and everything had looked good. So they thought they could finally get back to business and had even brought the team together again. Yet, the first thing the Machine did was malfunctioned. Where before she handed out maybe one or two names, she was suddenly providing them with list. As if the city had been under attack.

But that was thing, the city was perfectly fine and the person of interest list didn’t make any sort of sense. Reese had gone to check out someone assumed to be a bomber yet the perp ended up being a teenager that called in a fake bomb threat to get out of a math test. So the Machine wasn’t acting up to its normal standards and both Reese and Fusco were wondering if it was just pushing out numbers.

After the first couple of problems, the guys had tried to stay on the numbers and look into everyone yet soon became clear what the problem was with the Machine. It wasn’t able to date the crimes. Reese had gotten Jeff Blackwell’s number and he had checked the other man out. Though besides accidentally killing someone with his car a few years ago, Jeff was on the clean and narrow.

And that was actually a lot better than what Fusco got. Fusco had gone out of his way to track down a person on the list and he eventually found out that they had been dead for several years now. So that little blunder helped Finch to see what was wrong, but he told the guys to continue with the list while he figured out a way to fix the Machine. Yet Finch used the word fix, the Machine took that to mean that he was going to shut her down.

So that’s when the Machine turned against Finch and Root. She flooded Root’s cochlear implant to tell them that they shouldn’t shut her down. Even if it was only temporarily for maintenance. However, the Machine expressing wasn’t the only thing that was off. Finch had also programmed it to never be able to hurt someone and it managed to overcome that to nearly cripple Root with its ominous message.

Though Finch wanted to know why. Why would the Machine suddenly feel threatened by them? And the only answer he got was when his monitors suddenly, but showed him and Root listed as a threat. Right before all of their misdeeds were showed to them through a slideshow that proved they weren’t always good people.

Meanwhile, however, one of Reese’s numbers did pan out because the woman he thought he needed to protect was actually sent to kill him. So he found a perpetrator yet Finch had no idea who set the assassin after him. There was a possibility it could be Samaritan and there was the scarier option of the Machine being behind the hit. The Machine had taken to seeing everyone on the team as a threat so it could have tried to stop Reese because it feared Reese helping Finch and Root.

Only Root didn’t want to be a deterrence in what Finch had to do. So she talked Finch into putting her into heavily dosed coma and assured him that he could take on the Machine by himself. Even if he didn’t necessarily believe that he could. And as Finch was trying to come up with a plan, Reese called him and told him that he was running out of time.

Reese had needed backup. However, Fusco’s number was also real and he had left his cell phone in his car to go rescue a gambler and his family from the mob. So that left only Finch to help Reese and he couldn’t help him if he couldn’t see him. And the Machine was the one that had control over the monitors.

So to help his friend, Finch had to remind the Machine all the good they had done together and how the Machine had once saw him as a father. And while he managed to get through to the Machine in order to save Reese’s life, he was still weary of it. He later told Root that he wasn’t shutting it down because they needed information from it, but he didn’t actually take the idea of another reboot off the table.

And remember Jeff Blackwell, he was ultimately and secretly recruited into a shadowy organization when neither the Machine nor Finch were looking. So it turns out the Machine had been right about his number. He was going to kill someone.