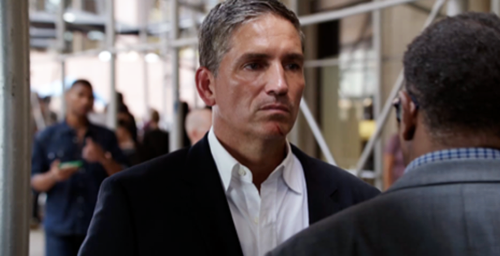 Tonight on CBS Person of Interest continues with an all new Monday May 16, season 5 episode 4 called, “6,741.” and we have your recap below. On tonight’s episode, Shaw (Sarah Shahi) manages to escape her captors, but the team worries about her mental state.

On the last episode, in flashbacks to 2010, Reese and his partner Kara Stanton from the CIA were told by their supervisor to investigate a soldier and kill him after confirming that he was selling information to the Taliban. Did you watch the last episode? If you missed it, we have a full and detailed recap right here for you.

On tonight’s episode as per the CBS synopsis, “Shaw manages to escape her captors, but the team worries about her mental state when she begins acting paranoid and reckless.”

Sameen Shaw was alive! However, she’s been in better condition than the she was in now. Shaw had been taken by Samaritan many months ago and the only thing that her people have heard since then was that she had been turned by the otherside. Only this is Shaw! And she’s been trying to fight Samaritan programing since the very beginning.

Samaritan had unfortunately taken Shaw to a private clinic where they’ve been running experiments on her, but the experiments haven’t been working. Samaritan had thought that they if they could get into Shaw’s head and make her believe that she turned or that there was a chance of escape that she would then lead them to the machine. Though Shaw has always tried to remain at least one step ahead. So she’s been constantly denying them the location of the machine despite the torture that Samaritan has continuously put her through.

For instance, Samaritan had set up a scheme that led Shaw to believe that she had escaped the clinic and the island that it was on. Yet her mind hadn’t processed the fact that she had then made it to New York far too quickly to be real. Or that finding Root in NYC had been just a tad too easy. So her mind was playing tricks on her. She wanted to believe that she had escaped so convinced herself that her escape had been real. And that the device Samaritan had implanted behind her ear was also real.

So Shaw had quickly gone to her friends for helped because she wanted them to remove the device that she seemingly couldn’t remove herself and she had even asked that it be tested because she felt as if Samaritan was still inside of her head even without the chip. But Finch ran simulations on the chip and he had found nothing. As if there was never anything on the chip to begin with. And that’s because it had been a placebo to fool Shaw’s mind. Which it did.

Chip or no chip, Shaw still felt like Samaritan had put something inside of her and that they were trying to take control. So that led to Shaw’s friends wondering if she had actually been turned during her capture and just hadn’t realized it yet. And as she saw her friends begin to doubt her, Shaw thought that the only way that she could win back their trust was to prove where her loyalties lie.

And so Shaw had come up with a plan. She led her friends to finding Greer, an elusive enemy of theirs that they had no idea was so close, and somehow she had thought she’d proven herself when she cut into Greer in order to obtain a USB flash drive that he had hidden inside of his arm. Though later she had questioned why she was able to find that flash drive when no one else much less the machine had spotted any irregularities and so that’s when she began to doubt herself. And what she was remembering.

However, there had been a part of Shaw that still wanted to believe that some of what she remembered was real. So she played along with the simulation for a while and had killed Greer to stop what she thought was her conversion to the dark side. Only things changed after she shot Reese. It seems that’s when she began to doubt anything that was happening was real and so she put an end to it later when she killed herself rather than harm Root.

Apparently Shaw’s mind had woken up while she had been in yet another simulation. So that’s when she took drastic measures because she knew that she could never harm Root and she also admitted that Root was her safe place. And so as long as Shaw has Root in the simulations with her – she’ll keep fighting Samaritan’s attempts as using these simulations to find the whereabouts of the machine.

So far Samaritans has run these simulations at least six thousand times, but with luck Shaw can continue to resist until she either rescues herself or her friends come for her.