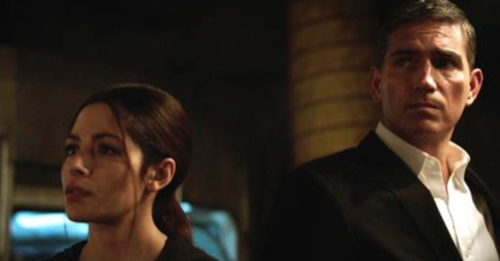 Tonight on CBS Person of Interest continues with an all new Tuesday, June 14, season 5 episode 12 called, “.Exe.” and we have your Person of Interest recap below. On tonight’s episode, Reese (Jim Caviezel) and Shaw (Sarah Shahi) chase Finch, (Michael Emerson) who could bring an end to Samaritan.

On the last episode Person Of Interest recap, the team became enmeshed in a conspiracy when the U.S. president was tapped as the next POI. Did you watch the last episode? If you missed it, we have a full and detailed recap right here for you.

On tonight’s episode as per the CBS synopsis, “Reese and Shaw chase Finch, who could bring an end to Samaritan, himself and the Machine when he infiltrates a maximum-security government facility.”

Finch commandeered the world’s most lethal computer virus on tonight’s episode of “Person of Interest” and there was only one reason he would steal such a thing. He must want to end Samaritan’s life. Yet, ending Samaritan was going to come at a cost and both the Machine as well as Finch knew what that cost was. If Finch released the virus and it covered all areas of the internet that one way or another it was eventually going to reach the Machine. And kill it too.

So Finch had a decision to make and he had to wonder whether or not he was capable of killing yet another one of his creations. However, the Machine offered to help Finch with his choice. She showed Finch a series of simulations and they all answered the question what if. What if Finch hadn’t helped to create Samaritan or the Machine? And the answer to that question was pretty bleak especially for his friends although Nathan would have been a different story all together.

Finch and his former best friend Nathan would have been happy if they hadn’t gotten involved with artificial intelligence. Nathan would have been alive for instance and they would have still been in business together. Working towards the common good albeit from the sidelines. Though not everyone else would have fared as well as Nathan in the new world. So Finch got to see what would happen if he had let someone else built Samaritan because that’s the one thing that wouldn’t have changed. Samaritan would have always been built by someone and unfortunately it would have always have lost sight of its purpose.

Samaritan was built to stop another terrorist attack like 9/11 however it would have always have taken on a terrorist persona in the end once it realized that freedom of choice got people in trouble just as much as anything else. So it still would have manipulated things and taken control of governments all around the world because it thought it was better than humanity at making decisions. But if Finch hadn’t learned a valuable lesson after Nathan’s death then he wouldn’t have passed the message on because that meant he never would have learned that no one should be considered irrelevant.

However, even as he broke into NSA headquarters, Finch still didn’t know if he was capable of destroying the machine. So he hesitated when it came to distribute the virus and Greer’s people were able to find him before he could make up his mind. Greer’s men found Finch and they brought him to Greer who surprisingly wanted to talk to Finch. He told Finch that they didn’t have to end like this. He said Finch could change his mind about Samaritan and save his Machine if he only allowed both artificial intelligence to merge.

Only Finch didn’t buy into the utopia that Greer was selling. Greer had tried to imply that Samaritan was saving the world yet Finch saw through that and was able to see Greer as the man who truly was. Greer wasn’t just power mad; he was actually certifiable. Greer truly believed that Samaritan was a god and he thought as god that Samaritan should choose who lives and who dies. Yet, Finch pointed something out to Greer. He said that it had been Greer that had corrupted Samaritan rather than other way around because he had taught Samaritan to take complete control regardless of anyone else’s free will.

And so once Greer realized he couldn’t convert Finch, he tested him and realized that Finch hadn’t given the code to the virus to the Machine. Thereby making the Machine unable to carry out the threat. So Greer was going to sacrifice himself in order to kill the both of them in an air-locked room that didn’t even have cell reception however the Machine had taken precautions. She had reached out to Reese and Shaw earlier so the two were able to connect her to some Wifi which gave her service inside of NSA.

So the Machine had helped Finch make it out of the room with Greer alive and she had also given the means to help his friends make it out of the building. But it turns out she had known the code to releasing the virus the entire time so the only reason she didn’t do so was because she wanted Finch to make a choice of his own. And he did make a choice. Finch realized that the Machine had never lost sight of its goal and had known that the better good (i.e. protecting humanity) would lead to her own demise therefore he released the virus.

And now all Finch has to do wait to see what the world looks like without either Samaritan or the Machine. Fusco had survived a Samaritan agent in New York who tried to cover up the dead bodies in tunnel and both Shaw and Reese had gotten out of the building without being detected. Yet, this fight they have with Samaritan and the people believe in it was probably far from over.