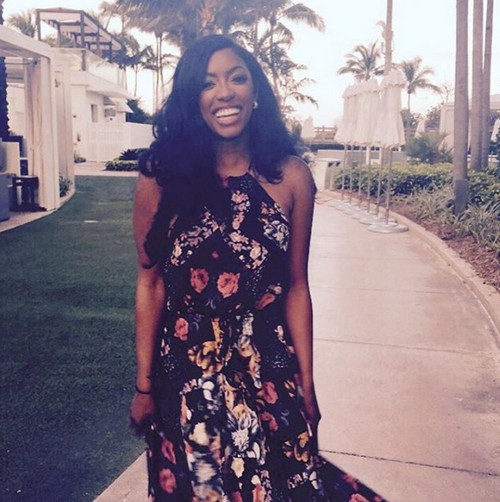 TMZ reports that fellow passengers observed as the Real Housewives of Atlanta star began entered a dizzy spell and then fainted in her first class seat. Had the hyaluronic acid filler injections Williams recently received for a nose job – done without the traditional plastic surgery route – brought on this fainting spell?

Lauren Williams, sister to the RHOA star, was insistent that Porsha just suffers from a low blood sugar problem that she insists is an issue that affects her periodically. Speaking with TMZ on March 16, Lauren asserted that Porsha was already on the mend and ready to put this incident behind her.

In fact, she states that doctors on board the airline were quick to help her sister by giving her a sugar pill. Additionally, to further refute suspicion that Porsha’s recent nose job was a contributory factor, Lauren Williams claims these fainting spells have affected Porsha in the past.

On March 4, Porsha Williams through her Instagram page – @porsha4real – posted a video showing her non-surgery nose procedure. She captioned the video “Thank you @simonourianmd1 for my beautiful new nose-done in minutes WITHOUT surgery!!! #HesTheBest”.

Celebrity laser and aesthetic surgery specialist, Dr. Simon Ourian, administered the hyaluronic acid filler procedure. Ourian did not miss out on such a social media opportunity. He was quick to ride the waves Porsha’s Instagram boost and quickly responded “Thank you @porsha4real Atlanta Real Housewife for sharing this video”.

Several of Porsha’s fans asked why the RHOA star even needed the nose job, when to them she looked perfectly fine before the procedure? At the same time there was a great deal of curiosity into this non-invasive technique.

As with most plastic surgery procedures, there is a great deal of risk, which vary from person to person, so was Porsha Williams’ fainting spell a side effect from the new nose do? If this is so, to what extent will Dr. Simon Ourian’s reputation be affected?

E! News pointed out that Porsha seemed perfectly fine on her interview with Dish Nation on March 15. The reality star has given no indications that she will take a break from the flashing cameras or busy schedule in light of her recent dizzy episode. The Villa Lounge nightclub party she is slated to host in Addison, Texas is still on for March 19.