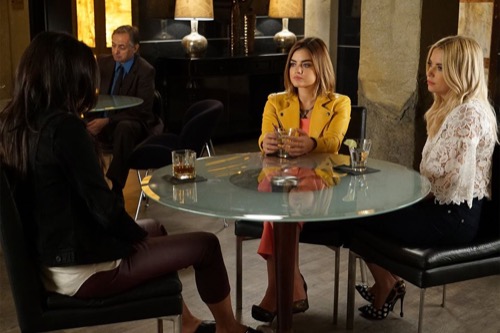 Pretty Little Liars returns to ABC Family tonight with an all new Tuesday February 16, season 6 Episode 16 called “Where Somebody Waits For Me,” and we have your recap and spoilers below. On tonight’s episode, the truth about the Liars’ personal lives begins to emerge as discoveries are made about Charlotte’s murder; Spencer (Troian Bellisario) learns her mother’s hiding a secret; Aria (Lucy Hale) confesses to Liam about Ezra’s (Ian Harding) book.

On the last episode, Team Sparia reunited to search for evidence that Sara Harvey was behind the threats; Caleb and Hanna made a plan to fight back against the new stalker using the security-footage tapes; Aria received unexpected news from her family; and Ali comforted Emily. Did you watch the last episode? If you missed it, we have a full and detailed recap right here for you.

On tonight’s episode as per the ABC Family synopsis, “while new discoveries are made in the investigation of Charlotte’s murder, the truth begins to emerge about the Liars’ personal lives. Spencer is concerned to learn her mother is keeping a secret of her own.

Aria confesses to Liam how deeply she’s involved with Ezra’s book. Ali admits that she and Elliott are more than just friends. Mona reveals where her true allegiances lie. Caleb, Spencer and Hanna deal with the complications of new relationships. Meanwhile, Emily and Hanna each receive shocking threats that elevate the seriousness of the situation.”

The season 6 episode 16 of PRETTY LITTLE LIARS is going to be really exciting and we’ll be recapping it for you right here.

Tonight’s episode of Pretty Little Liars kicks off with Hanna in bed with her fiancé Jordan – they are staying at a cheesy hotel with a heart shaped bed and leopard print sheets for Valentine’s Day. Meanwhile back in Rosewood, Aria and Spencer are in the basement of the Radley hotel – they climbed down the ladder that they found in Sara Harvey’s closet.

Aria and Spencer find what looks like ancient equipment that was used for experiments on the Radley patients – they follow a hallway that was walled off and it leads to a secret door that goes outside. That explains how Sara was sneaking in and out of her hotel room without anyone ever knowing that she was leaving. Spencer rushes home and tells Caleb all about Sara Harvey’s closet and the basement and the secret passageway.

Caleb has news of his own, he tells Spencer that he found something on Yvonne’s phone – Yvonne’s mom’s campaign was doing research on the Hastings family and Yvonne has copies of her medical records on her phone. Spencer says that they are old – she had a breast cancer scare years ago. Caleb says it wasn’t years ago, the medical records are dated 8 months ago, Veronica has been keeping it a secret.

Detective Tanner is meeting with Alison and Dr. Rollins about Charlotte’s murder – she says that they are working on a murder weapon and are certain she was attacked and hit in the back of the head before she was pushed off the roof. Tanner asks Alison if she has ever heard of restaurant called “The Two Crows.” Someone called the DiLaurentis house from the Two Crows restaurant and someone answered the phone and talked to them for three minutes. It wasn’t Alison and it wasn’t Rollins – which means it was Charlotte.

Emily meets up with Spencer and Aria – Emily is freaking out about the note she got threatening her eggs if she doesn’t give up the killer. Emily still swears that Sara Harvey was at the fertility clinic. She is going back today to check and makes sure that everything is okay with her eggs. Aria offers to tag along but Emily wants to go by herself. Aria runs in to Ezra’s brother Liam at the Brew – he tells her that they need to about Ezra and his book.

Emily arrives at the medical center and there is a sign on the door saying that they are closed – a nurse comes to the door and tells Emily that they had an accident last night and their equipment malfunctioned, they lost all of the eggs that they donated plus a bunch of other peoples’ eggs. Emily is upset, the nurse excuses herself to make some more calls and break the news to their patients.

Hanna wakes up at the cheesy hotel and has dozens of messages from the other liars on her phone. She gets out of bed and Jordan says that someone left a breakfast tray for them outside of the door. Hanna says that she isn’t hungry and they need to get back to Rosewood ASAP. She opens the note and it says “Honeymoon is Over – Poor Jordie.”

Emily and Spencer pay Alison a visit – they decide to come clean and tell her about the new “A” and the texts that they have received. Alison says that whoever is texting them doesn’t have their facts straight because Tanner says that the murder weapon wasn’t a golfclub, it was a hollow piece of metal.

Hanna and Jordan get back to Rosewood – Emily fills Hanna in on her eggs being stolen. Hanna doesn’t understand why they are being tormented again. Emily explains that “A” wants to know who killed Charlotte – and they are the four people who wanted Charlotte dead the most.

Spencer pays Mona a visit, she asks her why she had Yvonne accidentally leave her phone at the restaurant. Spencer knows that Mona wanted her to find the phone, Mona warns her that Yvonne’s Mom’s campaign is going to leak Veronica’s medical records. Mona apologizes to Spencer, she had no idea that Spencer didn’t know her own mom was sick.

Liam wants to see the next chapter of Ezra’s book – Aria hands over the pages and paces while he reads it. Liam is on to Aria, he can tell that she has been writing the book and not Ezra. He demands to know where he is and why Aria is writing the book for him. Liam agrees to keep Aria’s secret from their boss – but he tells her that Ezra better return and pick up the writing fast.

Spencer heads home, she wants Caleb to delete Veronica’s files from the opponent’s campaign files. Caleb refuses – that would be breaking too many laws and he is not trying to go to jail. He tells Spencer that her mom needs to get ahead of it and release the story herself. While Spencer and Caleb are talking he gets a text message from Hanna and hides it from Spencer – she wants Caleb to meet her for a drink.

Caleb meets up with Hanna and gives her a peptalk – he reassures her that she is strong enough to take on the new “A”, she survived it before. After their chat, Caleb leaves and Hanna has a flashback to when they were in New York together and their relationship began to unravel. Caleb was miserable and buried with work – and he hated being dragged to all of Hanna’s fancy work parties with uppity designers. When Caleb is leaving the hotel he bumps in to Mona in the elevator – he threatens her and tells her that if she is “screwing with Spencer he will tear her apart.”

Detective Tanner corners Emily and thanks her for staying in Rosewood to help with their investigation. Emily gets snarky and Tanner tells her that she isn’t enjoying being there any more than she is and the sooner everyone cooperates and they solve the murder, everyone can go home.

Alison and Spencer have a heart to heart – Alison reveals that she has been “involved” with Charlotte’s doctor Rollins. And, she is tired of keeping it a secret, since it is so unethical. After her talk with Spencer, Alison heads home and tells Rollins that she is tired of hiding their relationship and being his secret. She wants them to go public – and go on dates together.

Hanna and Aria head back to the hotel and in to the secret hallway – they think that Emily’s eggs might be hidden down there. They hear someone down in the basement and chase them down – Emily grabs the girl, but it’s just Emily. Apparently, she is looking for her eggs too. They give up their search and head back upstairs and have a drink – Emily comes to terms with the fact that her eggs are gone and she is not getting them back.

Aria is working late at night at Ezra’s apartment and he shows up. Aria jumps up and tries to apologize to him for accusing him of killing Charlotte. Ezra reveals that he ran in to her parents and they asked him not to tell her that they were getting back together. Ezra understand why she jumped to the conclusion and he apologizes to Aria for freaking out on her and leaving town without notice. It gets better – Ezra wrote the chapters he owed the publisher while he was away, he has no idea that Aria already sent in chapters pretending to be him.

At Spencer’s house, she is picking up and goes to move her sister’s suitcare. But, the handle is broken, she whispers to Caleb that the handle that is missing is “long, hollow, and rectangle at the end” – just like the murder weapon that Tanner described.