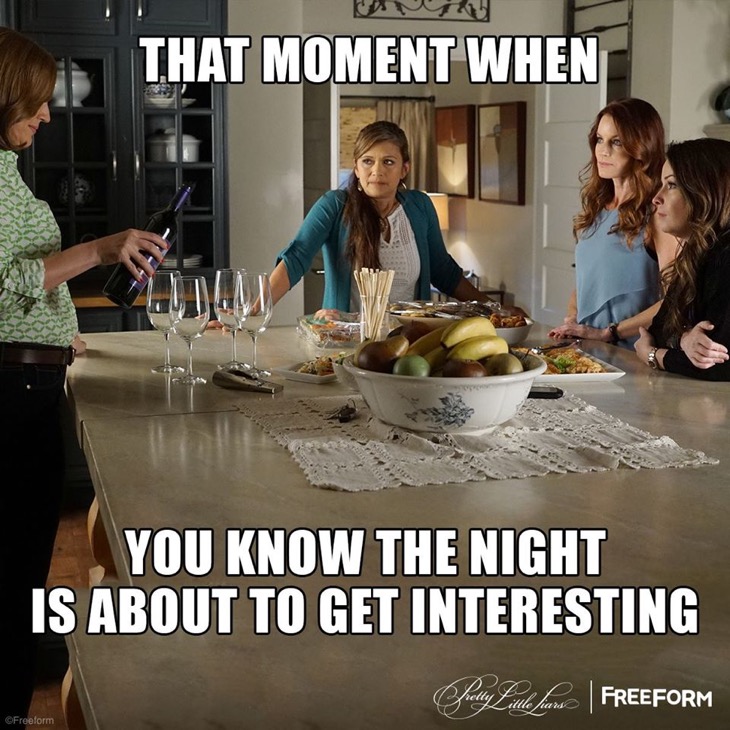 Pretty Little Liars returns to ABC Family tonight with an all new Tuesday February 9, season 6 Episode 15 called “Do Not Disturb,” and we have your recap and spoilers below. On tonight’s episode, Team Sparia reunite to search for evidence that Sara Harvey is behind the threats; Caleb (Tyler Blackburn) and Hanna (Ashley Benson) make a plan to fight back against the new stalker using the security-footage tapes.

On the last episode, with the Rosewood P.D. breathing down Hanna’s neck about The Radley security footage, she opted to confess the truth to those closest to her in hopes they can help. Aria continued to search for answers, with help from Emily, on whether Ezra was as guilty as he seemed. Spencer worked together with Caleb to track down the new threat.

Meanwhile, there was awkwardness all around when new love interests emerged and old ones resurface. Did you watch the last episode? If you missed it, we have a full and detailed recap right here for you.

On tonight’s episode as per the ABC Family synopsis, “Team Sparia reunite to search for evidence that Sara Harvey is behind the threats; Caleb and Hanna make a plan to fight back against the new stalker using the security-footage tapes; Aria receives unexpected news from her family; and Ali comforts Emily.”

The season 6 episode 15 of PRETTY LITTLE LIARS is going to be really exciting and we’ll be recapping it for you right here.

Tonight’s episode of Pretty Little Liars kicks off at the Montgomery house – Aria’s dad Byron tells her that he has been keeping a secret from her, he has been “seeing someone.” Aria braces herself for the worst – then Byron announces that he and her mother Ella have been spending time together again and are getting back together. They just have been keeping it a secret from her and Mike until they knew it was for real.

At the condo, Hanna wakes up and her fiancé Jordan is rushing around – he says they are late and he wants to leave for the city. Hanna gets a text from the new “A” – telling her not to leave. Hanna makes up a lie to and tells Jordan that she can’t leave the house because she is using the landline phone to confirm all the details for her boss Claudia’s trunk show. Jordan is obviously annoyed, he tells Hanna that he will see her later that night. Emily walks in on Hanna and Jordan kissing goodbye and Jordan rushes out of the house.

At Spencer’s – she and Caleb are lying in bed and drinking coffee. Caleb tells Spencer that he thinks they should go to the cops and tell them about the new “A.” Spencer doesn’t think that is a good idea yet, the new “A” could be anywhere and anybody that they know. Caleb is skeptical that the new “A” is Sara Harvey though…he thinks that is someone else. Caleb mentions talking to Toby about it – but Spencer says that is definitely NOT an option. Spencer’s phone goes off – she has a lunch meeting with Gil and totally forgot about it.

Emily is getting ready to go to the clinic to have her eggs harvested, she lied and told her mom that she is slumber partying with Hanna. Emily is hyped up on her hormones shots, she freaks out when Allison texts her and says that she is back in Rosewood. Meanwhile, Hanna gets a phone call from her boss, Claudia wants her to switch out all of the models for Asian models at the last minute.

At the Montgomery’s, Ella corners Aria and wants to know if she is upset that she and her dad are getting back together. Aria says it’s fine – she just has a lot going on since Charlotte was killed. Aria is actually relieved because if Byron was with Ella the night that Charlotta was killed, then that means her dad isn’t the killer.

Hanna corners her mom Ashley and demands to know why she took the security footage back-up to cover for her. Ashley plays coy and says that it is just a coincidence that the tape is missing. Hanna asks Ashley where it is so that she can get rid of it. Ashley says that the drive is gone and she should just be thankful that she cleaned up her mistake.

Hanna receives a text from “A” telling her to hand over the drive ASAP. Hanna calls Aria and has her come over to the house after Ashley goes to work – they destroy the whole house searching for the drive and can’t find it. Aria thinks that they should set “A” up, and pretend they have the drive, even if they don’t.

Dr. Rollins shows up at Emily’s and wants to know why she is ignoring Alison’s phone calls. Emily is flustered and tells him it is not a good time, while Rollins is getting ready to leave, he sees the paperwork from the fertility clinic.

Spencer heads to her lunch with Gil and learns that she never had a lunch date with Gil. But, Yvonne shows up and says that she had a lunch date saved in her phone calender with Spencer. Spencer tells Yvonne that she will be right inside and then she calls Caleb and tells him that someone hacked her phone and set the date up for her. “A” is trying to get her and Yvonne together in the same place. Caleb thinks she should bail – but Spencer decides to stick around and try to figure out what “A” is up to.

Spencer and Yvonne chat about the campaigns over coffee – when Yvonne leaves, she accidentally leaves behind her phone. Spencer looks around suspiciously and then grabs the phone and runs out of the restaurant.

Alison heads back to work at the high-school, she is sitting in her classroom going over papers and Sara Harvey stops by. She says that she was supposed to talk to a class about living with a disability. Sara sits down and tells Sara that she wanted to apologize for her loss – and for lying on the witness stan when Charlotte went to court. Alison doesn’t want to hear it. Sara says that she was there for Charlotte when Alison’s family turned her back on her. Sara goes on to say she was like “Charlotte’s other sister” and she wants to be able to bond with Alison and share their memories. Alison gets upset and storms out of her own classroom.

Hanna heads to Caleb’s house and gets him to make her a fake hard drive to give to “A.” Spencer shows up while they are talking and tells Caleb that she stole Yvonne’s phone. Caleb says that it is a good thing – he takes the phone and says that he will use it to try and track down the hacker that scheduled their lunch date together.

Alison shows up at Emily’s house – she tells her about her run-in with Sara Harvey, she is still creeped out. Emily says that she can’t stay, she has somewhere to be. Emily thinks that Dr. Rollins told Alison about her donating her eggs. But, Alison had no idea. She offers to go with Emily while she gets her eggs harvested.

When Caleb is done with the phone, Spencer rushes to take it back to the restaurant. She tells the hostess that she found Yvonne’s phone outside. Mona walks up to them and interrupts and says that she has been looking for the phone everywhere. She is working for Yvonne’s family’s campaign – Spencer is suspicious that Mona might be the one that hacked Yvonne’s phone.

Aria checks in to the hotel in the room right next door to Sara Harvey’s room. Sara hears arguing in the hallway, it’s Sara and Hanna’s mom Ashley. Ashley is upset because Sara won’t let any of the maids in to the hotel room to clean. Ashley argues that it is hotel policy that the rooms get cleaned at least once a week.

Emily wakes up in the hospital bed and has had a nightmare – she sees Sara Harvey hovering over her and injecting a needle in to her IV. Emily panics and starts screaming and wakes up – Alison tells her that it was all just a bad dream from the painkillers they give her, she insists that no one has been in her hospital room.
At the hospital the doctor arrives and tells Emily she has bad news – the couple that was buying her eggs has changed their mind. Alison thinks that she should have her eggs frozen. Emily decides to donate them to a fertility clinic – that means that she won’t be getting paid.

Meanwhile, Hanna shows up late to the fashion show and has a fall out with her boss Claudia – she fires Hanna. Jordan picks her up and tries to comfort her. Hanna whines that he can’t marry someone who is unemployed.

Aria says that she is going to go look in the closet, a few minutes later she doesn’t return. Spencer heads to the closet and finds a huge hole in the wall and a ladder leading down in to a dark hole. Spencer calls Aria’s name down the hole – but there is no answer.

Tonight’s episode ends with “A” plugging the fake hard drive from the liars in to their computer – but Caleb installed a virus on the hard-drive and it completely wipes out “A”’s hard drive.