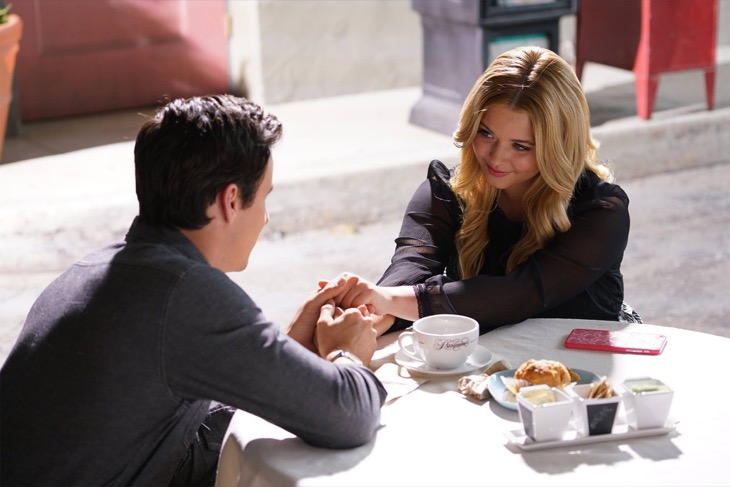 Pretty Little Liars returns to ABC Family tonight with an all new Tuesday March 1, season 6 Episode 18 called “Burn This,” and we have your recap and spoilers below. On tonight’s episode, The Liars begin to take the threats more seriously after Emily’s (Shay Mitchell) nearly killed; Spencer (Troian Bellisario) comforts Caleb, (Tyler Blackburn) who’s dealing with the consequences of taking the blame for the leak; Emily sets out to find the stalker.

On the last episode, two lovers finally got married with a special officiant’s help; the Liars investigated a new suspect in the case; Aria tells Ezra the truth about her involvement with his book; Spencer and Caleb dealt with a media leak; and Emily’s harassed by a stalker while she continued her search for Sara. Did you watch the last episode? If you missed it, we have a full and detailed recap right here for you.

On tonight’s episode as per the ABC Family synopsis, “the Liars begin to take the threats more seriously after Emily’s nearly killed; Spencer comforts Caleb, who’s dealing with the consequences of taking the blame for the leak; Emily sets out to find the stalker; Aria and Ezra move forward with the novel; and Hanna avoids her personal life.”

The season 6 episode 18 of PRETTY LITTLE LIARS is going to be really exciting and we’ll be recapping it for you right here.

Tonight’s episode of Pretty Little Liars kicks off with Aria filling Hanna and Emily in on Alison and Elliot’s surprise wedding, while the clean up the Montgomery house after all of the wedding festivities. Aria picks up a camera and starts clicking through the photos or Ella and Byron’s wedding. The liars notice the place cards at the tables all have a message for them, put together it reads, “Give me the killer by election night or you lose.” That means their stalk was at Aria’s house the wedding!

At Spencer’s house, her father is lecturing her about Caleb leaking Yvonne’s abortion news to the press – even though Spencer knows it wasn’t him. Mr. Hastings reveals that Caleb issues a statement to support his girlfriend – and slammed Caleb for leaking the story. He wants Spencer to release a statement saying that she dumped Caleb, to distance him from their campaign. Spencer asks her Dad where Melissa is, he says that an emergency came up in London and she had to drop everything and leave the country ASAP – obviously it just make her look more guilty. Now Melissa has motive to kill Charlotte a possible murder weapon, and has skipped town.

Meanwhile, Hanna’s mom Ashley is in full-blown bridal shower mode. The party is tomorrow and she is super excited about it – Hanna is pushing her to cancel it. Hanna says that Alison just went out of town, so she won’t be attending. Ashley points out that she could invite Mona instead, and reminds her that she still has friends flying in from NYC.

Aria heads to Ezra’s to try and figure out what they are going to do about the book – she is scared that she is going to get fired. Apparently, Ezra already talked to Aria’s boss Jillian and told her that Aria helped with the book, Jillian wasn’t upset, she loved Aria’s work and now she wants her and Ezra to write the book together.

Emily is outside on the phone with Hanna and she hears a familiar sound and says that she has to go – somewhere around the corner someone is driving a car that sounds like the one that nearly killed her the night before.

Caleb is at the hotel and trying to find a room, they don’t have any vacancies and neither do any other local hotels. Ashley feels guilty, she invites Caleb to stay at her house in the guest room – he turns her down and says that he will figure it out.

Emily bumps in to Ezra outside and asks him about the noisy car, he says that it is called “whistle tips” and people have them installed in their cars so that they sound like that. Emily’s wheels are turning – it looks like she may be working on some sort of idea.

Toby shows up at Spencer’s house and is freaking out – he demands to know why Caleb would hurt Yvonne like that. Spencer is trying to explain that Caleb is innocent, and Caleb arrives. Before they can get everything straightened out – Toby punches Caleb in the face and storms out of the house. Spencer helps Caleb with his bloody nose and encourages him to just tell Toby the truth. Caleb says that can’t tell anyone else about the stalker until they get more answers or they are just going to look crazy.

Ashley is at the loft and preparing for the big wedding shower. She mentions to Hanna that she invited Caleb to stay at the house because he didn’t have anywhere’s else to go. Hanna is not happy – she shouts at her mother that she had no right to do with, and scoffs that she is tired of her mom not giving her fiancé Jordan a chance.

Mona corners Spencer at the Brew and demands to know why she and Caleb leaked Yvonne’s medical records. Spencer scoffs that she is innocent, and for all she knows Mona is the one that did it. Mona seems genuinely upset and shouts that Yvonne’s leak got her fired from her campaign too.

Aria tells her boyfriend Liam that she is going to be Ezra’s co-author, and it doesn’t go super well. It’s obvious that Liam is skeptical about them working together.

Aria is at home working on the book with Ezra – they are in the midst of a heart to heart and there is a knock at the door. It’s a Rosewood cop. Apparently someone witnessed a girl matching Aria’s description leaving the 2 Crows Diner right after the phone call to Charlotte was made. Aria insists that she was never at the diner, but they take her down to the police station to stand in a line-up to see if the witness can pick her out. Aria sees someone leaving the police station that looks an awful lot like Sara Harvey, after the line-up, Lt. Tanner says that Aria is free to go, “for now.” Aria sneaks a peek of the witness’s statement on the Lieutenant’s desk and the girl that was seen at the diner was holding car keys with pin dice on them.

Meanwhile, Emily is doing some investigating of her own. She heads to the Rosewood Garage and asks the mechanics about the truck – they refuse to answer any of the questions. Emily spots the truck that tries to run her over in the garage, and tries to take a picture of it, but they kick her out. She manages to show a picture of Melissa to one of the men that work at the garage on her way out – he tells her that Melissa is NOT the woman that borrowed the SUV.

Aria heads to Hanna’s wedding shower and fills Hanna and Emily in on her trip to the police station. Spencer is running late, she is at her house having a screaming match with her dad about Caleb. She screams at her dad that he has no right to judge Caleb for leaking a story, because his daughter Melissa covered up a murder. Spencer’s dad reveals that Melissa had nothing to do with Charlotte’s death – he tells Spencer that she was blackmailed by someone and she came to Rosewood to drop off money so they wouldn’t spill her secret. After she dropped off the money, Charlotte was murdered, so she got scared and left town.

Spencer arrives at Hanna’s party late and fills the liars in on what her dad told her about Melissa. At the party they are trying to play a game – and the sound system goes haywire and angry rock music starts blasting. Suddenly the lights turn off and the central air turns on in overdrive. Papers and giftwrap start flying everywhere, and somehow a fire is started in the middle of the livingroom. They manage to get everything undercontrol and the fire put out, Aria is burnt and taken to the hospital. Spencer is convinced Mona had something to do with the disaster since she was at the party.

Spencer gets a text message from Toby asking her to meet up and she makes up an excuse and rushes out of the party. She keeps having flashbacks to her and Toby before they broke up. She and Toby are sitting in her dorm room and Spencer just took a pregnancy test. While they are waiting for the test results – Toby and Spencer get in a fight over whether or not they would keep the baby, and what their futures hold.

Spencer arrives at the Brew, Toby is waiting for her. Spencer tells Toby that Caleb didn’t leak Yvonne’s story, she spills the beans about the new “A” blackmailing them about Charlotte’s murder. Spencer gets emotional and apologizes for what happened to Yvonne – she mentions her and Toby’s pregnancy scare. Toby reassures her that his new girlfriend Yvonne is just as strong as she is – and she is going to be just fine.

Ezra visits Aria in the hospital – she gets emotional and tells Ezra that she doesn’t think it was an accident. When Ezra starts prying, Aria changes her story and says that she was just standing too close to the fire place. Liam barges in to the hospital room and interrupts their talk – he announces that he has good news for both of them, he just talked to their boss and everything is official, Aria and Ezra’s joint book was approved.

Emily is leaving the party with Mona, she notices that she has pink dice on her keychain. She asks Mona if she is the one that called Charlotte form the diner. Mona gets nervous and says she can’t talk about it. Emily shouts at her to get in the car so that they can talk.