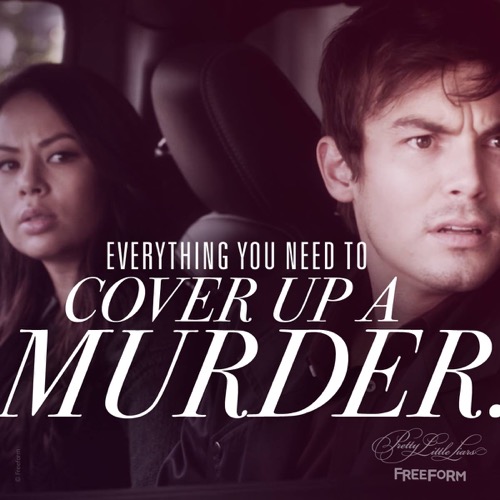 Pretty Little Liars returns to ABC Family tonight with an all new Tuesday, June 28, season 7 episode 2 called “Bedlam” and we have your Pretty Little Liars recap below. On tonight’s episode, the ladies grow suspicious of Elliott as Ali’s (Sasha Pieterse) condition worsens; Liam, Aria (Lucy Hale) and Ezra (Ian Harding) work on the book together; and Spencer (Troian Bellisario) and Caleb (Tyler Blackburn) ignore the elephant in the room.

On the last episode, in the seventh-season premiere, the ladies raced to save Hanna following her abduction by Uber A and must hand over evidence revealing Charlotte’s real murderer in order to do so. Did you watch the last episode? If you missed it, we have a full and detailed Pretty Little Liars recap right here for you.

On tonight’s episode as per the ABC Family synopsis, “the ladies grow suspicious of Elliott as Ali’s condition worsens; Liam, Aria and Ezra work on the book together; and Spencer and Caleb ignore the elephant in the room. Meanwhile, Emily receives a disturbing phone call and attempts to see Ali.”

Tonight’s episode of Pretty Little Liars picks up where we left off last week – Hanna is in the car with Mary Drake. Mary wants her to go to the police, but Hanna insists on her driving her to Spencer’s house so that she can see her friends. Hanna is obviously shocked to learn that Mrs. DiLaurentis had a twin sister.

At Spencer’s house, everyone fawns over Hanna. They fill her in on what they learned about Mary Drake, she was Cece’s mom, and a patient at Radley. Hanna is certain that Mary Drake is Uber A, but she doesn’t understand why Mary let her go. Caleb explains that Mary let Hanna go because they gave her evidence that Ali is Charlotte’s killer. Meanwhile, Aria gets a text from her boyfriend Liam saying that he is coming to town.

There is a knock at the door, someone delivered a bouquet of flowers, it’s from AD. The card says, “Couldn’t have done it without you, glad we are on the same team.”

Hanna and Caleb get a second alone, it’s obvious they still have feelings for each other. They awkwardly talk about the kiss they had before she was kidnapped. Hanna thinks that she may have slipped in to old habits just because she was scared.

Emily is worried about Ali, at the hospital. Emily thinks they should warn Elliot that Alison might be in danger. Spencer tells Emily that Elliot would think they were crazy, she leaves to head home with Caleb. Emily tries to get Hanna to call her fiancé Jordan, but she refuses, she says it is too late.

Later that night Emily gets a phone call from a frantic Alison, she cries in to the phone and begs Emily to help her. Emily rushes to the hospital, the nurse won’t let her in to see Alison. Emily corners Elliot, he tells her that Alison is better off in isolation and its not in their best interest to see each other. He promises to call Emily when she can have visitors again.

The next day Hanna and Lucas head out to eat – Lucas wants to talk about the business proposition he sent her. He wants to finance her own fashion company. Hanna tells Lucas that she is not as smart as he thinks she is, she doesn’t think it’s a good idea.

Emily rushes to find Spencer, she tells her about Alison’s phone call and Elliot not letting her have visitors. Emily wants to ask Mary to help them. Mary is Alison’s family, technically, so she can get them in to the hospital.

Liam arrives in Rosewood – Aria breaks it off with him and tells him that she needs to work out some of her own personal problems before she can be in a relationship. Liam is not happy, he cries, and Aria lies and insists that it has nothing to do with Ezra. Before Liam leaves, he reveals that he is working on her and Ezra’s book, he’ll be editing it and overseeing the project. Awkward…

Spencer, Emily, and Aria pay Eilliot a visit. They try again to convince him to let them see Alison, but he is not having it. Elliot says that he knows what is best for Alison, and her brother Jason approves of his treatment. While they are arguing with Elliot the girls all get a text from AD, it says, “She’s mine now, no take backs and no do-overs.”

Aria meets up with Ezra, she fills him in on her break-up with Liam and their chat with Elliot. Ezra is surprised that Elliot talked to Jason. According to Ezra the Rosewood police have been looking all over for Jason and can’t find him. They need someone to confirm Mary Drake’s story because no one remembers Jessica having a sister.

Liam sits down with Ezra to go over the book and it doesn’t go well – Liam clearly has an axe to grind. He basically tears apart all of Ezra’s righting, and comments that in the book Ezra took advantage of the character Aria.

Spencer is working at the campaign office and Mary Drake stops by – she wants to know how Hanna is doing. Mary says that she thinks that Hanna should have went to the police or the hospital. She confesses that she hasn’t had the best experiences with hospitals and that is why she didn’t make Hanna go the other night. Mary brings up Alison and says that she feels bad for her because she was in a mental hospital before too.

Mary tells Spencer a story – she says that when they were 14, Jessica was babysitting a baby named Teddy Carver. Jessica put Teddy down to sleep and then she wanted to go meet up with a boy, So Mary went over to babysit for her instead. Teddy’s parents came home – and Teddy was dead. Jessica said that the baby was fine when she left, and accused Mary of killing him. Then, her parents put her in Radley. Mary says that she was framed by her sister Jessica. And, she is afraid something similar might be happening to Alison.

Hanna is having a meltdown, she and Jordan go back to the bar where they first met in NYC. When they arrive, the bar is gone, it was tore down. Hanna freaks out and says that she is a one woman wrecking ball and everything she touches doesn’t work out, she thinks that she is bad for Jordan.

After her bizarre trip to NYC with Jordan, Hanna meets up with Lucas and signs the business agreement. While she is signing the papers, Lucas notices that she isn’t wearing her engagement ring anymore.

Aria confronts Liam about his horrible meeting with Ezra. Liam says that he read the book, and he knows that Aria was sleeping with Ezra in high-school. Aria insists that Ezra didn’t take advantage of her. Aria refuses to apologize for her past because it made her the person that she is today.

Alison wakes up at the hospital and she is in bad shape – Emily is standing over her. Emily and Mary Drake got in to see her. Alison is totally out of it, she doesn’t even remember calling Emily and telling her that she needs help. Alison cries and thinks that she is in Radley. Alison sees Mary and thinks that she is her mother – she starts rambling to her about Elliot and then Elliot barges in and kicks them all out.

In the hallway, Emily demands to know what Elliot has done to Alison and why she is so out of it. Elliot takes Mary in to his office. Mary hisses at Elliot that he has gone too far and what he is doing to Alison is not right and wasn’t part of the plan.

At Spencer’s house, Caleb finds her drinking, she reveals that she got fired by the company she worked at because she has been in Rosewood too long. Spencer changes the subject, she wants to talk about their relationship. Caleb insists it wasn’t a mistake. Their chat is interrupted by texts from Emily – she tells them that Ali is getting worse and there is something going on between Elliot and Mary Drake.

Meanwhile, someone sneaks in to Alison’s room and injects something in to IV and she begins to drift out of consciousness again.