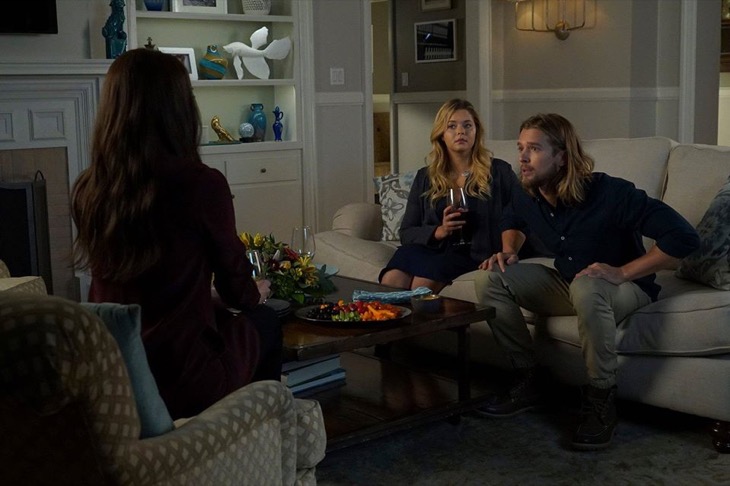 On the last episode, the ladies questioned if Rollins was actually dead, as the police began to catch on to the Liars’ cover-up; Hanna debated telling the cops the truth; Ezra struggled with his awkward relationship. Did you watch the last episode? If you missed it, we have a full and detailed Pretty Little Liars recap right here for you.

On tonight’s episode as per the ABC Family synopsis, “Jason returns to Rosewood to warn Ali not to trust Mary. Meanwhile, the ladies make a discovery about Mary and Mrs. DiLaurentis that leads them to a storm cellar; Ezra gets a call about someone from his past; and Noel Kahn becomes a prime suspect.”

The season 7 episode 7 of PRETTY LITTLE LIARS is going to be really exciting and check out our live Pretty Little Liars recap down below!

Tonight’s episode of “Pretty Little Liars” starts with the girls having brunch at the Radley. Spencer gives all the girls a name bracelet, a throwback to the name bracelets that Alison gave them all years ago. They toast to Aria’s engagement and celebrate their friendship. Alison receives a note in the bill from A.D. saying that they know the girls killed Elliot. Just then several police officers enter the restaurant and take the elevator upstairs. Emily discovers that Sara Harvey has died and tells the other shocked Liars.

Jenna is in tears as the police question her about Sara’s death. Emily tells the others that Sara tried to warn her about someone other than Jenna, even though Jenna had a file on her computer labeled Charlotte DiLaurentis. Spencer decides that the girls have to steal Jenna’s laptop to look at the file, and the others agree. Afterwards, Emily goes on a run with her mom and the two discuss her mom’s birthday and what their plans will be. At The Brew, Spencer sees Jenna talking to Toby. After Jenna leaves, Spencer tells Toby that Jenna told the girls that the reason she came back was so she could celebrate his engagement with him. Toby denies this and tells Spencer that Jenna is in Rosewood because she is looking for forgiveness.

In a flashback, Toby tells the story of a fight between the two step-siblings that was alluded to in a previous episode: Toby and Jenna both went on vacation with their parents and while the two were reconnecting, Jenna tried to kiss him. Back in the present, Toby tells Spencer that Jenna left later that night after he rejected her advances. Toby then receives a call requesting police at his residence, and rushes off to find out what has happened. Meanwhile, Alison and Mary Drake are painting over the sinister A.D. message in Alison’s old room. Jason comes home and is ecstatic to see Alison, but not Mary: he hands her a court order appointing himself as Alison’s guardian and kicks Mary out of the house. Alison and Jason confront each other over Mary and Elliot as well as Jason’s continued absence from her life. Alison asks Jason to give Mary a chance.

Meanwhile, Yvonne is at the hospital while Spencer waits. Hanna tells Spencer that she stole a hotel keycard from her mom so they could investigate Sara and Jenna’s rooms. Elsewhere, Aria and Ezra have met with a wedding planner. Ezra, overwhelmed, suggests that instead of having a big fancy wedding, the two elope at his friend’s villa in Tuscany.

Aria agrees to think about it. Then, Hanna decides to investigate at the Radley solo, using her mom’s keycard. In Sara’s room, she discovers a case under the bed but, before she is able to investigate further, Caleb walks into the room. Hanna’s mom hired him as hotel security and agrees to help. Ezra and Aria continue discussing eloping when Aria gets a text from Jason asking her to meet him. At work, Emily bumps into Noel Kahn.

Aria and Jason meet up for coffee and she tells him about her engagement with Ezra. She asks him if he has told anyone about them and the two agree to keep whatever happened between them a secret. Jason asks Aria for help with Alison and tells her that, before he left Ethiopia, he discovered that the Carissimi group’s non-profit had been drained of funds meaning that Elliot didn’t just take all of Alison’s money; he took all of the business’s money as well. He believes that Mary is involved in the theft.

Caleb poses as a massage therapist and gives Jenna a massage, taking the opportunity to go through her purse. Hanna fills in Spencer on finding a locked box in Sara’s room and tells Spencer that she hasn’t told Caleb about her breakup with Jordan yet. Caleb steals the key from Jenna and gives it to Spencer and Hanna who find that the box is filled with papers. As they are photographing each page, someone enters the room, forcing the two to hide. The unknown person opens the box and puts in what appears to be Mary Drake’s patient file. The person is revealed to be Noel Kahn who places a call to a Dr. Cochran and says angrily into the phone as he leaves a message that he is running out of patience.

Emily’s mom comes to the Radley to celebrate her birthday with Emily but a noisy bachelorette party ruins their night. Emily’s mom confesses that she feels guilty having fun since Emily’s dad’s death. Meanwhile, Hanna and Caleb go over some of the papers from the box. Caleb discovers that some of the papers continue readouts of Mary Drake’s DNA. Mary, Alison and Jason sit down for dinner and Aria shows up as an invited guest of Jason’s. At the hospital, Spencer checks on Yvonne who is only mildly injured after their home was broken into and the Mary Drake file was stolen. Spencer begs Toby to take Yvonne and leave Rosewood for their own safety.

Back at Radley, the noisy bridal group sends Emily and her mom free drinks. At dinner, Jason and Aria confront Alison about the missing Carissimi money. Mary tells the group that as soon as Jason and Ali were old enough to have any memories of her, Jessica forbade her to see them. She also reveals that she was the mysterious guest staying in their Aunt Carol’s house years ago when Jason was looking for a place to hide out after his close call in the elevator.

A flashback shows the two inside the house shortly after Jessica told Mary that Charles was dead. Jessica refused to tell Mary how Charles died and told Mary to never come back. She then hid in Aunt Carol’s storm cellar until Mary left. The other three are surprised to hear that the house had a storm cellar. Aria goes to Radley to tell Emily about the storm cellar and suggests that the girls go investigate. She tells Emily that Ezra wants to elope tomorrow but she is unsure whether or not she should. Emily convinces Aria to elope.

Meanwhile, Caleb and Hanna continue to pour through the papers from the lockbox. Hanna tells Caleb about her breakup with Jordan and she asks Caleb if the two of them are still friends after all the drama with Spencer. Caleb assures her that they are. Toby shows up at Spencer’s barn and confides that he was really building the house for Spencer but when he received the call about Yvonne being hurt he realized that he can’t live without her. Yvonne has family in Maine and he has decided that they are going to move there instead of staying in Rosewood. Spencer is devastated at the prospect of Toby leaving.

At Aunt Carol’s house, Ali, Hanna, Emily and Spencer go into the root cellar to investigate. The cellar is full of files about the girls and Mary, except Aria’s file is missing. They discover that Mary had a second child their age. The cellar is full of photos of the girls and Alison is convinced that Jessica had been searching for the whole time she was on the run. While they are still in the cellar, Spencer’s car alarm goes off. While the girls jump inside, Spencer realizes the keys had been stolen just when the door shut and a timer starts counting down. When the timer reaches zero, the root cellar explodes and the girls receive a message from A.D. saying that if they discover A.D.’s identity before A.D. finds Charlotte’s killer, they will all die. As they are watching the cellar burn, someone goes up to the back window and writes

When the timer reaches zero, the root cellar explodes and the girls receive a message from A.D. saying that if they discover A.D.’s identity before A.D. finds Charlotte’s killer, they will all die. As they are watching the cellar burn, someone goes up to the back window and writes “I see you,” reminding viewers of when Noel Kahn wrote the same message on the back of Ezra’s car when he first discovered Ezra and Aria were intimate. Meanwhile, as Ezra and Aria pack to leave for their trip to Tuscany, the FBI shows up at Ezra’s door to tell him that Nicole may still be alive. A.D. is shown with two files: one for Aria and one for Noel. A.D. burns the Noel file and begins looking through Aria’s.