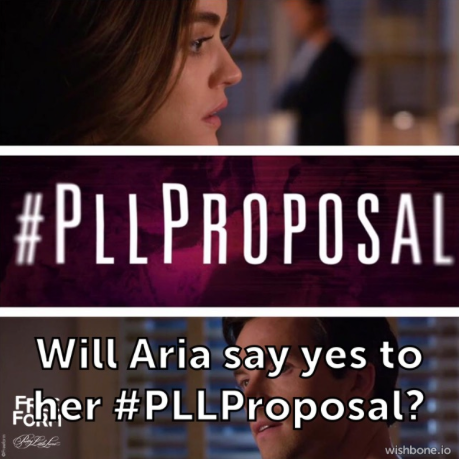 Pretty Little Liars returns to ABC Family tonight with an all new Tuesday, August 2, season 7 episode 6 called “Wanted: Dead or Alive” and we have your Pretty Little Liars recap below. On tonight’s episode, The ladies question if Rollins is actually dead, as the police begin to catch on to the Liars’ cover-up.

On the last episode, Jenna came back to Rosewood and befriends someone who put her at the top of the Uber-A suspect list. Did you watch the last episode? If you missed it, we have a full and detailed Pretty Little Liars recap right here for you.

On tonight’s episode as per the ABC Family synopsis, “the ladies question if Rollins is actually dead, as the police begin to catch on to the Liars’ cover-up; Hanna debates telling the cops the truth; Ezra struggles with his awkward relationship; Jenna reveals her new partner; Ali learns the gals named her as Charlotte’s killer in order to free Hanna; and someone is murdered for playing with the wrong team.”

The season 7 episode 6 of PRETTY LITTLE LIARS is going to be really exciting and check out our Pretty Little Liars recap down below!

Tonight’s episode of Pretty Little Liars kicks off at The Brew, Emily finds Aria sitting there and having coffee. Hanna and Spencer arrive in a huff – Hanna is freaking out, she is convinced that Rollins is still alive. Spencer tells her to snap out of it. Aria thinks that Mary or Jenna knows that they killed Rollins and they are covering it up to blackmail them later.

Alison arrives, she’s wearing the red jacket that they gave to AD, the secret is out – Alison knows that they threw her under the bus with the jacket when she was in the hospital. Spencer tries to explain that they had no choice, and they thought she was guilty. Alison snaps that they thought Hanna’s life was worth more than her’s. Alison gets a text from Mary, Detective Fury is at the house waiting for her. Alison and Spencer rush to the house to talk to the cop.

Det. Furey explains that Rollins real name is Archer Dunhill, he is wanted in the UK for several counts of petty fraud. Toby is on the rental car trail and speaking to witnesses, Marco shares the police’s theory. He thinks that Rollins is still in town, he is creating the trail to divert the cop’s attention.
Spencer chases Marco outside to “clear the air” after their hook-up. He reassures her that what happened between them is not going to affect the investigation. Spencer swears that Alison is cooperating and not hiding anything from the police.

Aria and Ezra aren’t speaking after his disastrous proposal. She texts Hanna and asks her to talk about it, she needs advice. Hanna hears another phone ringing in her purse, it’s the burner phone. She answers the phone and Rollins is on the other end, or someone that sounds an awful lot like him. He snarls, “The next time you kill someone, make sure that they are dead.”

Hanna meets up with Aria, she’s freaking out. She thinks that Rollins is coming back to get revenge on her because she hit him with the car. Meanwhile, Ezra is blowing up Aria’s phone and trying to talk to her, but she ignores his calls to deal with Hanna.

Spencer heads to the Lost Woods Resort, she’s trying to find Rollins’ credit card info so that they can figure out who is using them. When Spencer arrives, Mary is there, she’s freaking out. Mary is packing up her stuff to take back to Alison’s, Mary swears that Rollins is coming back to kill her. Either Mary is a really great actress, or she is genuinely scared of Rollins, and there is no way that she is making it seem like he is still alive.

Aria confesses to Hanna that Ezra proposed, and she didn’t give him an answer yet. Hanna has been keeping a secret too. She and Jordan aren’t engaged anymore. She gave him his ring back, she has just been wearing a fake ring because she wasn’t ready for people to know yet.

Caleb bumps into Ezra at the hotel bar. Caleb has a bag, he was planning on going out of town, but he isn’t sure where to go. They bond – Caleb tells Ezra that he has a feeling something is going on and the girls aren’t telling them about it.

Meanwhile, Emily is upstairs and snooping around. She delivers a tray of drinks up to Jenna’s hotel room. She snoops through Jenna’s laptop, she finds a page for rental cars and a file named “Charlotte.” Sara Harvey arrives and calls Emily out for snooping around. Emily and Jenna argue. Jenna scoffs that she and Sara are looking for the same thing, Charlotte’s killer.

Jenna reveals that she and Charlotte were friends, she was helping Charlotte look for her birth mother. And, Archer/Rollins was Charlotte’s boyfriend, he just seduced Alison and posed as Charlotte’s doctor to get her out of the hospital. Jenna kicks Emily out of the hotel room, Sara follows her and tells Emily not to come back … it’s not safe.

Caleb heads over to Spencer’s house so that they can finally talk. He apologizes for what happened, and being confused. Spencer tells Caleb that she understands, but she doesn’t regret trying to make things work with him. She cries and confesses that Caleb was the first guy that she really loved since Toby. They share an emotional goodbye and Caleb leaves.
Mary returns home and Alison is waiting for her. Alison went through Mary’s stuff and demands to know why she stole her mother’s necklace. Mary shows Alison the C-Section scar from where Charlotte was born. She sobs that Jessica took her baby from her, and everything else, including the necklace. So, when Mary saw it, she took it back.

Emily meets up with Alison later for wine. Emily fills her in on her chat with Jenna. Alison is upset that Charlotte played her, and used her to get out of the hospital. She thought that they were sisters, instead Charlotte sent her boyfriend to marry Alison and brainwash her. When Emily leaves, she climbs in her car. There is someone sitting in a cop car wearing a mask and trailing her.

Hanna and Spencer sit outside drinking – they clear the air after their awkwardness over Caleb. Hanna tells Spencer that she had a dream about her when she was being held hostage. Elliot’s burner phone rings in Hanna’s purse. She answers it, it sounds like Rollins on the other end, “He tells them that they are Stupid bitches for leaving Alison alone.”

Hanna and Spencer call Alison and warn her that they think that Elliot is coming for her. Alison goes outside and asks the cop outside to come inside with her and wait with her until her friends arrive. It’s the cop wearing the mask that has been following Emily around. He jumps Alison from behind once they are in the house and slams her head in to a glass mirror. Suddenly the real police pull up outside and the fake cop has to make a run for it before he can finish Alison off. She manages to grab a piece of his mask off his face during the struggle.

Spencer and Hanna arrive and Marco is barking out orders to the cops in the livingroom – they rush upstairs to check on Alison. She explains that AD was there, he was wearing a mask and dressed as a cop. Alison cries that he was going to kill her, but the police siren scared her off.

Aria and Ezra have a long talk. He gets down on one knee and proposes to her again. This time…Aria says yes. It looks like Ezria is getting married.

Tonight’s episode ends with Sara Harvey in her hotel room, she is frantically packing her suitcase and clearly in a hurry to get out of town. She opens her hotel door and is shocked to see someone standing there.

Spencer and Hanna decide to sneak back to Rollins’ grave in the woods to see if he is really dead. They grab shovels and start digging to see if his body is where they left it. They are shocked when they find Rollins’ very dead corpse…he’s not the one that has been calling them and tried to kill Alison.

The next morning housekeeping heads in to Sara Harvey’s hotel room, the maid finds her very dead body in the bath tub.