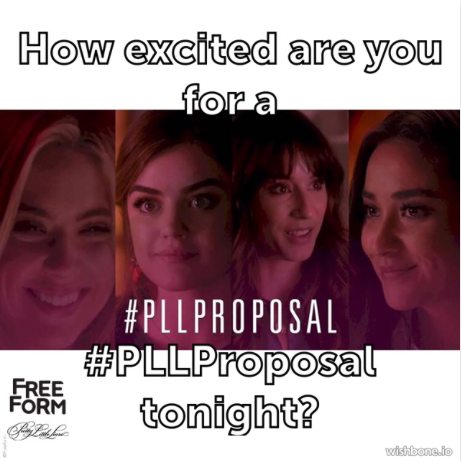 Pretty Little Liars returns to ABC Family tonight with an all new Tuesday, July 19, season 7 episode 5 called “Along Comes Mary” and we have your Pretty Little Liars recap and spoilers below. On tonight’s episode, Jenna Marshall comes back to Rosewood and befriends someone who puts her at the top of the Uber-A suspect list.

On the last episode, the gals tried hiding a mistake, but they hurt their romantic relationships in the process. Did you watch the last episode? If you missed it, we have a full and detailed Pretty Little Liars recap right here for you.

On tonight’s episode as per the ABC Family synopsis, “Jenna comes back to Rosewood and befriends someone who puts her at the top of the Uber-A suspect list. Meanwhile, Ali’s put under the watch of Mary Drake; Spencer enlists Hanna’s help to search for Caleb; and Aria and Emily discover a secret apartment.”

The season 7 episode 5 of PRETTY LITTLE LIARS is going to be really exciting and check out our live Pretty Little Liars recap down below!

Tonight’s episode of Pretty Little Liars kicks off with Aria heading to the DiLaurentis house to check in on Alison. She is shocked when she arrives and sees Mary Drake. Alison explains that Welby wouldn’t release her without a family member there to watch her. Aria is worried but Alison reassures her that she will be fine, and she is killing two birds with one stone. She is out of the hospital, and she can try to get some answers out of Mary Drake.

Alison heads inside with Mary. Mary explains that Elliot tracked her down in London and told her that Charlotte was murdered, they bonded over their grief for Charlotte. Mary whines that Elliot was clever and manipulative and took advantage of her. Mary insists that she never wanted Elliot to get revenge and kill Alison, she apologizes and asks for Alison’s forgiveness. Mary excuses herself and heads to the guest room to lie down.

Emily wakes up on her friends’ couch – she makes her a cup of coffee and they flirt and share their first kiss. Emily’s cell phone goes off – she starts freaking out and realizes her test started 10 minutes ago, she runs out the door. Emily arrives at the exam room and they won’t let her in.

Ezra returns home and is surprised to see Aria in his apartment, she says she just needed a quiet place to write. Ezra tells Aria that he went to New York to see Nicole’s parents, he wanted to tell them that he was moving on with his life and was seeing Aria. Aria is glad that he went and happy he was honest with her.

Hanna and Spencer are at the coffee shop, they over hear the cops talking about finding Rollins’ abandoned car. Hanna is freaking out, she’s sure that they are going to get caught. Spencer tells her to keep calm. Emily and Aria get a message from Mona, she has been working on Elliot’s burner phone. Mona made an interesting discovery.

The night that Elliot was killed, he texted someone and told them that Alison didn’t kill Charlotte. They have no idea who he sent the message to. Mona also gave them an address where Elliot used to go to every day.

Emily and Aria fill Alison in on what they found out. She doesn’t want to hear it. They decide to do check out the address, but Alison says that it is too risky. The cops might be watching the apartment, and if they see the liars there they will link them to his disappearance.

Afterward, Alison heads to the ATM and tries to take out some cash, she is shocked when she realizes there is no money in her account.

Aria heads back to Ezra’s apartment, she hears a cell phone ringing and finds his in his bag. She is shocked when she sees that it is Ezra’s dead ex Nicole on the caller ID. She answers the phone and hears people talking in a foreign language. Aria freaks out and deletes the call so that Ezra doesn’t see it.

Spencer is searching all over Rosewood looking for Caleb. Meanwhile, Hanna is at the coffee shop, she is shocked to spot Jenna and tells Spencer. Spencer wants Hanna to trail Jenna and see what she is up to.

Aria heads over to Emily’s to talk to her about the strange Nicole call. But, Emily has even weirder news. She got an email from school saying that she scored a 92% on the test she didn’t take. Then Emily got a message from AD, it read, “Thank me later ungrateful bitch.”

Emily wants to find out who AD is ASAP. She picks up Elliot’s cell phone and texts the mystery number pretending to be him, the number texts back and tells them to meet at the “regular spot.” Aria thinks that the “regular spot” is the secret apartment Elliot had, the one that Alison told them not to go to.

Mary finds Alison ransacking the house. Alison is having a meltdown, she shouts that Elliot robbed her, he took everything – her checkings, savings, safety deposit box, and her shares of the Carisimi Group.

Spencer heads to the police station to ask Toby for help finding Caleb. Toby knows where Caleb is and he reassures Spencer that he is fine, he just needs some time to think by himself. On the way out, Spencer bumps in to Marco Furey, Toby introduces them and reveals that Marco is his new boss on the Elliot Rollins case. Jenna shows up at Alison’s doorstep.

She is shocked to see Alison at the door, she says that she thought Alison was still in the hospital. Jenna admits that she knows Elliot – Alison says that he doesn’t live there any more, and demands to know how she and Elliot knew each other. Jenna says it was a mistake for her to stop by and leaves abruptly.

Emily and Aria show up at the apartment that Elliot was hiding – it looks disgusting, and hasn’t been cleaned in a while. They find a fake head hidden in the murphy bed, and photos of Darren Wilden. Emily finds a Passport hidden in the sink underneath the dirty dishes.

Jenna heads to the bar and she bumps in to Sara Harvey and introduces herself. Jenna agrees to have a drink with her and they chat.

Hanna tracks Spencer down at the café, Spencer is upset because she still hasn’t found Caleb. Hanna wants to know what she can do to help. Spencer says she can start by not wearing one man’s ring when she still has feelings for another man.

Hanna tracks Spencer down at the café, Spencer is upset because she still hasn’t found Caleb. Hanna wants to know what she can do to help. Spencer says she can start by not wearing one man’s ring when she still has feelings for another man.Emily and Aria are still snooping around the apartment when they hear someone outside, there’s a knock on the door, and a voice shouts that the Rosewood PD is outside. Luckily for them, it is just Toby.

Emily lets Toby in, she explains that Alison found a slip of paper at her house with the address on it, so they decided to check it out and see if Elliot was there. Toby kicks them out so that he can call Detective Furey. He warns Emily and Aria that they better not have touched anything, because the detectives are going to comb through the apartment with a fine-tooth comb…their fingerprints are probably all over it.

Alison is at home with her creepy aunt Mary Drake. Mary reminisces about a lullaby that she and Jessica used to listen to when she was little. Their chat is interrupted by a phone call from the Rosewood PD, she heads down to the station and meets Detective Marco. Marco has some interesting news, he says that they ar searching for Elliot in Baltimore. Apparently, someone rented a car with Elliot’s credit card, and now they have all of the highway patrol looking for the rental. The police think that Elliot is still very much alive.

Emily heads to the café to grab some coffee – she is shocked to see Sara and Jenna there hanging out together. They both taunt Emily, and oddly enough, they both know that she is going back to college at Hollis. The liars all meet up, Alison reveals that Elliot robbed her and she is completely broke. She fills them in on the police searching for Elliot in Baltimore.

Someone is using his credit card, and that means someone knows what they did. Emily thinks that it might be Sara and Jenna. Aria gets a text from Era asking her to meet up with him at the Brew and she rushes out.

Tonight’s episode ends with Spencer going to bed alone, meanwhile, Hanna is at home with Emily, who is comforting her. Alison heads home, she finds her red coat hanging in the closet with a note on it from AD. The note reads “Your friends gave me your jacket, but I couldn’t find a shred of evidence on it.”

Aria heads to the Brew and its empty, upstairs she finds the apartment full of candles and Ezra is waiting for her in a suit and tie. Ezra gives Aria an emotional speech, he tells her that he wants her in his life for the rest of his life, then he gets down on one knee and pulls out an engagement ring and asks Aria to marry him.

Jenna is still drinking at the hotel with Sara, and they are joined by Noel Kahn …