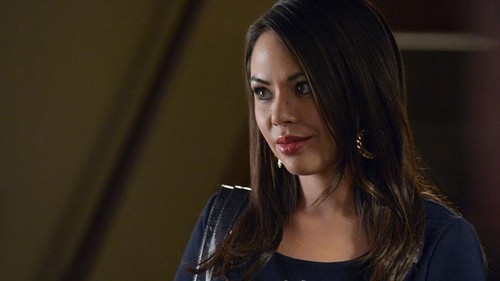 Pretty Little Liars Season 6 spoilers reveal that there is a twin running amok in Rosewood – just like the PLL fans have expected for ages. As you all know the Pretty Little Liars book series actually revolves around twin sisters, Alison DiLaurentis had an evil twin.

As the “A” mystery unraveled over the course of the past six seasons – fans were certain that Cece Drake (Charlotte) was Alison’s twin sister, but in the end it turned out that she was actually Alison’s long lost transgender brother.

According to Pretty Little Liars Season 6 spoilers from showrunner Marlene King – Cece Drake may not have been a twin, however there is a twin in Rosewood. What?! A PLL fan asked Marlene on Twitter, “Can you give us a hint on if there is a twin?” King replied, “There is a twin. You will see who it is soon, very soon.”

This is HUGE news for Pretty Little Liars fans, who has a twin?! And, is the twin the new “Big Bad” that has been stalking the girls since they returned to Rosewood? As crazy as a twist that it would be – it is probably safe to assume that Spencer, Hanna, Aria, and Emily are not hiding a twin, we have been following the girls closely since Season 1. It would make no sense to randomly introduce a secret twin now.

Mona Vanderwaal could definitely have a twin. The girl has more personalities than we can keep track of, and swapping places with a twin would definitely explain some of her irrational behavior. We haven’t seen much of her backstory over the years, so it wouldn’t be a stretch to introduce a random Mona now.

We really no little to nothing about Sara Harvey – except that she was Cece Drake’s alleged BFF in Radley, and might or might not have killed her. We can all agree that Rosewood doesn’t need any more Harvey’s running around though.

Or Marlene King could just be toying with us, maybe the twin has nothing to do with the plot at all – and Hanna or Aria’s new boyfriends might just have a random twin brother or sister that stops by.

What do you guys think? Who in Rosewood has a twin – and are they part of Cece Drake’s murder mystery? Let us know what you think in the comments below and don’t forget to check CDL for all of your Pretty Little Liars Season 6 recaps and spoilers.