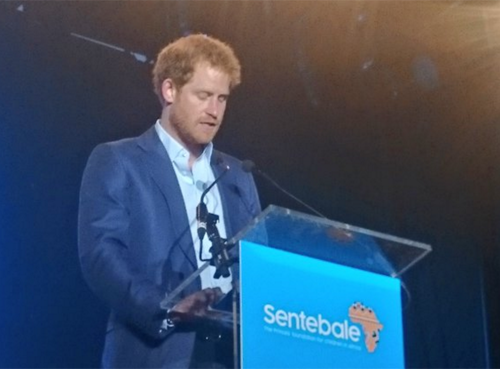 On June 28th, Prince Harry continued his charitable work by hosting a fund raiser for his AIDS charity, Sentebale, in the form of a concert in the back gardens of Kensington Palace. Headlining the event was British band, Coldplay.

Harry is keeping his late mother’s memory and legacy of charitable work alive by continuing the fight against HIV AIDS, a cause that was close to Princess Diana’s heart. In the next few weeks, Prince Harry will visit with AIDS patients and medical staff in the UK before heading to Durban, South Africa where he’ll speak at the International AIDS Conference next month.

Kensington Palace released a lengthy statement from the prince on this issue and why it’s so important to him: “Prince Harry believes that greater public awareness of the innovations in both testing and treatment for HIV can help save lives and he wants to do his part.”

Harry wants to build on his knowledge of the virus and the challenges and opportunities faced by those around the world.

During these next events, Prince Harry will focus on destroying stigmas associated with the virus, something his mother also fought hard to change. He will also tackle testing, treatment, and prevention methods.

This choir consists of singers all from Lesotho, where Harry’s charity, Sentebale is located. Harry and Prince Seeiso founded sentebale back in 2004 in memory of their late mothers.

Joss had this to say about the two princes: “I’ve come into contact with Harry and William for years now and we as a country we watch them grow and we watch them do lovely things and I thing all of us as a nation should be proud of those boys, those men.”

With loads of media coverage, the world has a front seat to the good works done by Princes William and Harry. Harry’s stepmother, Camilla Parker-Bowles and Prince Harry’s father, Prince Charles were notably absent from last evening’s concert. Could it be they weren’t invited?

Most likely they were, but it’s been well reported that the next in line doesn’t like reminders of his ex-wife. Prince Charles probably loves that his sons do so much charity work, but he probably hates how they take after their mother, more so than him.

Prince Harry, in particular, must rub his father the wrong way sometimes like now with this concert because AIDS awareness was so important to Princess Diana.

Prince Harry is much like his mother. Princess Diana, both in his charity work and personality. Prince Harry knows how to interact with everyone; from young babies to the elderly. He can coax a smile or laugh. The prince knows just what every individual situation calls for, just like his mother did.

Unlike his stepmother, Camilla Parker-Bowles, who doesn’t interact with AIDS patients. Harry doesn’t have much in common with his father’s second wife, a woman Harry and his brother, William tolerate.

Diana received more attention from the media and was more popular with the public than Charles ever was. Plus, Charles must receive reminders of how his first marriage ended and of Princess Diana’s death every time he reads of his sons good deeds. He probably still, nearly 20 years later, must feel some of that burden on his shoulders.

And to add more insult to injury, even in death, Diana still wins the popularity contest.

Camilla Parker-Bowles too, probably can’t stand to be in the presence of her stepsons at these events either. Regardless of how long it’s been since Diana’s death and despite being married to Charles for ten years, there are still those in the public who despise her for stepping in on Diana’s family.

Never mind she and Charles had been seeing each other for years before his marriage to the much younger Diana.

Why do you think Harry’s father and stepmother were absent from the concert, CDL readers? Why didn’t Harry receive much family support for this event? Tell us in the comments. Be sure to stay right here at CDL for all the latest Royal gossip and news.

“Please take a little bit of time to learn about the fight against HIV” – Prince Harry#SentebaleConcerthttps://t.co/WoX6NoMlEV